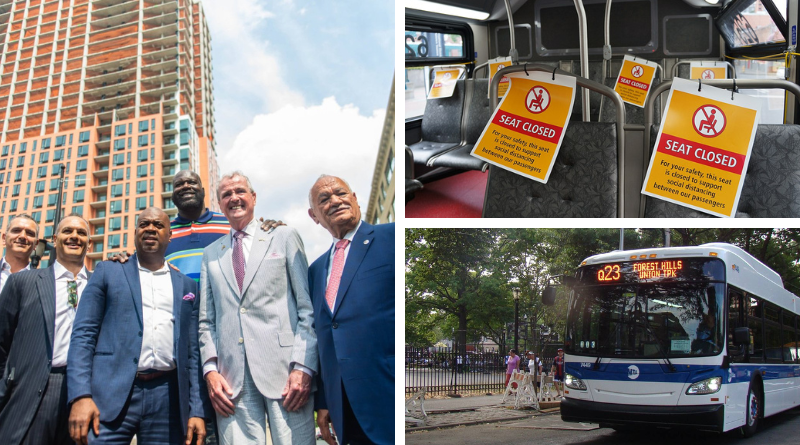 A new study by researchers at Boston University and Harvard University finds that non-Hispanic Black cyclists and pedestrians are 4.5 times and 2.2 times more likely to die than their non-Hispanic White counterparts, respectively. Inequity in transportation outcomes such as this is a stark reality and a growing concern for planners and policymakers. The researchers note that these findings alone do not provide a full picture as to the causes of this inequity, but still reflect racial differences in access to safe, convenient cycling and pedestrian infrastructure

WASHINGTON—One Thing We Learned During the Pandemic: Transit’s Not Dead
Josh Feit, PubliCola, June 14, 2022
Per a report by Commute Seattle, a local transit advocacy group, downtown workers and employees at small businesses with fewer than 50 employees—about 200,000 jobs, or about a third of Seattle’s workforce—represent the city’s largest untapped transit market. One survey found that 40 percent of workers at small companies with fewer than ten employees would use public transit if their employers provided transit passes; this number stood at 25 percent for companies with ten to 49 employees. In addition, ridership statistics during the pandemic indicate that people in working-class communities and those with a high minority population (who comprise a large part of the workforce in small businesses) continued to use transit or returned to using transit more quickly than other groups.

WISCONSIN—Wisconsin Transportation Agencies Make Their Case for Public Transit as Pandemic, Budget Woes Loom
Madeline Fox, Wisconsin Public Radio, June 14, 2022
Facing difficulties in restoring pre-pandemic ridership, Wisconsin transit agencies such as Milwaukee County Transit System have streamlined services in efforts to preserve their viability. With cuts from the state government, transit in Wisconsin shows in microcosm the struggles of many middle-sized American communities in rebuilding ridership and services in a post-pandemic world.

MORRISTOWN—Train Station, Road Improvement Grant on Morristown Council Agenda
Vianella Burns, Patch, June 14, 2022
The Morristown Council plans to apply for NJDOT grants to further improve their transportation infrastructure, which could include bicycle and pedestrian travel around the Morristown Station. The funding in question is set for non-traditional transportation-related projects in municipalities with the Transit Village designation, reflecting the shared commitments of communities like Morristown and the State of New Jersey to commit to high quality non-automobile travel.

JERSEY CITY—Jersey City Aims to Purchase Port Liberte Ferry Terminal, Expand Service and Customer Base
Ron Zeitlinger, The Jersey Journal, June 10, 2022
On the heels of South Amboy’s recent ferry terminal investments in Central Jersey, Jersey City has taken the move to purchase the Port Liberte ferry terminal to give residents more modal options in getting to Manhattan. Port Liberte was shuttered during the pandemic, and in assuming ownership and responsibility for the site, the City hopes to ensure lower fares and more accessibility than its pre-pandemic service.

WASHINGTON, D.C.—Understanding Why the Region Grapples with Unequal Access to TOD
George Jordan, Greater Greater Washington, June 14, 2022
Washington, D.C. has seen major population growth and economic gains on the wings of successful TOD implementation, but it also grapples with intense inequity and displacement. District policymakers and stakeholders increasingly recognize the need to coherently address inequitable wealth and incomes through a TOD lens. But, they also must consider how increased density and transit growth has already affected the nation’s capital as they critically chart a path forward.

She Rode 3 Buses to School in the Bronx. Now She’s a Top U.S. Transit Official
Michael Laris, The Washington Post, June 10, 2022
In May, Veronica Vanterpool was named deputy administrator of the Federal Transit Administration. As a Bronx native, she took three buses to high school. Following her tenure as the chief innovation officer at the Delaware Transit Corporation and spending a decade as an activist at the Tri-State Transportation Campaign, she hopes to fix broken transit services and promote transit accessibility in her new role at the FTA. “What keeps me here in this work is the equity of it,” said Vanterpool in an interview with The New York Times.

MASSACHUSETTS—BPDA Approves 13 New Development Projects Containing 567 Residential Units
Boston Real Estate Times, June 17, 2022
The Boston Planning & Development Agency (BPDA) Board of Directors approved 13 new development projects, comprising 567 housing units (a mix of homeowner and rental units), of which 210 will be designated income restricted. In total, the approved projects represent approximately 876,275 sq. ft.  in new development. Nearly all the projects will be located in close proximity to transit, incorporate energy saving and other environmentally friendly practices, and will be located near and/or are contributing support to Bluebikes, greater Boston’s bike sharing system.

WASHINGTON, D.C.—How a New Transit Network Will Improve Transportation in Western Montgomery County
Ethan Goffman, GreatergreaterWashington, June 14, 2022
The Great Seneca Transit Network (GSTN), a system similar to bus rapid transit (BRT) and quicker than the existing Ride On Bus, is coming to western Montgomery County. The first two segments of the network are the Pink Line, which will connect Shady Grove Metrorail Station to the Life Sciences Center near Shady Grove Hospital, and the Lime Line, which will run from Shady Grove Metro to Crown Farm and the heart of the Life Sciences Center. The GSTN will serve new developments in the region and aid in healthcare equity by increasing access to Adventist Hospital, said Joana Conklin, the BRT Program manager for Montgomery County.

CALIFORNIA—VTA Eyes Affordable Homes by San Jose BART Stops and in Google Village
George Avalos, Mercury News, June 10, 2022
The Santa Clara Valley Transportation Authority (VTA) looks to build several affordable homes along the BART line planned for downtown San Jose. Although the agency plans for development atop the proposed underground BART stop next to the Diridon train, it recently rejected a proposal for a 26-story, 200-unit housing high rise called Eterna Tower, calling the development infeasible. Alternatively, the VTA seeks to seize two parcels at the 17-31 E. Santa Clara site and plans to build a 500-unit housing development, of which 125 units will be affordable residences.

OHIO—Cincinnati Officials Want Major Changes to Land Use, But They’re Taking It Slow
Becca Costello, Cincinnati Public Radio, June 11, 2022
Looking to increase density in its revitalizing urban core, the city government of Cincinnati finds itself concerned with land use and zoning reform. Reportedly, Cincinnati has a long way to go to change its current land use policy and zoning ordinances, which currently does not allow multi-family housing structures in more than half of residential areas, a condition which limits its ability to orient new development towards transit.

NEW YORK—When the Only Way to Get to Work Is This Slow Bus
Ana Ley, The New York Times, May 31, 2022
When New York City’s subway system was built in the last century, Queens still had farmland. Now large swaths of the city’s second most populated borough are served by city bus routes, including the Q23 running through neighborhoods of East Elmhurst, Jackson Heights, Corona, Elmhurst, Rego Park, Forest Hills, and Middle Village. The route is one of the City’s slowest, serving blue-collar riders who build hours into their schedules to compensate. With modernizing service in the borough as a goal, in March the MTA released a draft plan to redesign the Queens bus network. Community engagement on the plan will continue through June.

MALAYSIA—SWNK Houze Unveils as the Most Strategic Residence in BBCC
Edge Prop, June 15, 2022
Bukit Bintang City Centre (BBCC) is a forthcoming transit-oriented integrated development located at the heart of Malaysia’s capital city, Kuala Lumpur. The development spans 19.4 acres and will feature premium offices, residences, hotels, a retail mall, and an entertainment hub. The Hang Tuah Station, housed within BBCC, is a centralized transit hub that will provide access to key destinations in the Klang Valley via monorail, light rail transit (LRT), and mass rapid transit (MRT).

SPAIN—Madrid Aims to Transform Mobility with Huge Urban Forest
Christopher Carey, Cities Today, June 15, 2022
Spain’s capital of Madrid has contracted two architectural firms to realize its vision of 145,000 sq. meter “urban forest.” The plan is set to begin in two years, redeveloping around public transit infrastructure such as rail stations and adding bicycle lane connectivity among other features of the project.