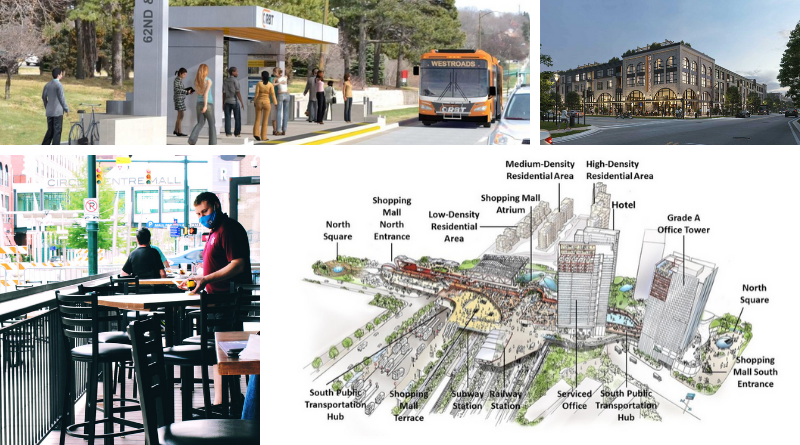 What Happens to Public Space When Everything Moves Outside
Feargus O’Sullivan, Bloomberg CityLab, June 29, 2020
As cities the world over begin to reopen, residents are seeing a transformation in their streets. To make room for social distancing measures, restaurants have begun to occupy parking spots, vehicle lanes, and parks or public squares for outdoor service and seating. In San Francisco, the Shared Streets movement has resulted in changes that allow businesses to apply for temporary use of parking areas and sidewalks as outdoor dining areas during specific serving hours. In some places however, cars and pedestrians are still competing for space. O’Sullivan looks at some of the challenges of adapting public spaces to suit contemporary needs.

Last month, the Massachusetts Bay Transportation Authority (MBTA) began broadcasting real-time data on bus and station crowding along nine of its bus routes, a move designed to help riders make better travel decisions and to adhere to COVID-19 social distancing standards. The authority is making the information available on its website, via digital signs, and on the Transit smartphone app. Using data from automated passenger counters (APCS) that sense boarding and alighting at the front and rear doors, the information shared with the public characterizes crowding levels as “Crowded,” “Some Crowding,” and “Not Crowded.” The MBTA plans to add information for more routes throughout the summer.

Virtual Meeting to Discuss Proposed 289-Unit Riverfront Development in Kearny
Jared Kofsky, Jersey Digs, June 30, 2020
The Kearny Planning Board takes to the virtual meeting application Zoom to discuss the preliminary and final site plan proposals from Russo Acquisitions, LLC. The site of the proposed project, the Bridge Vermella, sits along the Passaic River, near the NJTRANSIT Newark Broad Street Station and the Harrison PATH Station. Development documents detail plans for a four-story building with 289 apartments, ground floor retail, and a walkway along the river.

Ho-Ho-Kus Crossings Site Proposed for ‘Area in Need of Redevelopment’
Marsha A. Stoltz, NorthJersey.com, June 26, 2020
This week, the Ho-Ho-Kus Zoning Board of Adjustment will review an application for a 1.87-acre site and consider whether it to be declared an “area in need of redevelopment.” The site is currently zoned for commercial use, which allows single-family, two-family, and community residences. The designation would allow for mixed-use developments and would support the municipality’s desire for redevelopment and revitalization. The development site, dubbed Ho-Ho-Kus Crossings, sits along North Maple Avenue and the Franklin Turnpike, less than a quarter mile from the Ho-Ho-Kus Station on the NJ TRANSIT Bergen County Line.

CONNECTICUT—Connecticut DOT to Run First Automated Transit Bus in US
Cailin Crowe, Smart Cities Dive, June 30, 2020
Connecticut Department of Transportation (CTDOT) plans to launch “CTfastrak,” a 9.4-mile automated bus rapid transit system for Hartford, a project supported by a $2M Integrated Mobility Innovation grant from the Federal Transit Authority (FTA). CTDOT has partnered with Robotic Research LLC. and together they plan to deploy the automated system by 2021. The project will incorporate the Advanced Driving Assist System (ADAS) by bus manufacturer New Flyer of America, which will allow steering, docking at station platforms, and platooning to be technologically operated with little-to-no interference from a driver.

NEBRASKA—ORBT Could Bring Age-Friendly Housing Options for Omaha Residents
Eric Galatas, Public News Service, June 29, 2020
If adopted, a recently proposed Transit-Oriented Development policy could bring more housing options to neighborhoods located along the Omaha Rapid Bus Transit (ORBT) route on Dodge Street, the city’s main corridor for retail and entertainment. While the proposed policy does not specify zoning changes along the ORBT, anticipated development opportunities would require additional public engagement and may spur these kinds of changes. Omaha is seeing growth in two demographics, young professionals and seniors, and is in need of more “age-friendly housing” and other amenities, such as multi-family complexes, pedestrian-oriented streets, and green spaces. The city plans to hold several public hearings about the policy before the $30M ORBT project rolls out this fall.

CALIFORNIA—State of California Approves Over $25 million for Development of the Roseland Village Project
Sonoma County Gazette, June 26, 2020
The Roseland Village revitalization project just received more than $25M from the State of California to pursue a mixed-use, mixed-income development. The project will add 75 affordable housing units and a bike and pedestrian pathway, closing a key pathway gap along the Joe Rodota Trail to the Sonoma Mountain Village. The improvement will also create 10 miles of continuous pathway between Roseland residences and transit services in Downtown Santa Rosa.

CHINA—Tianhui Todtown in Shanghai
Isabelle Lomholt, e-Architect, July 2, 2020
Hong Kong-based architecture firm, Ronald Lu & Partners (RLP), has completed the first phase of Tianhui (English: TODTOWN), a TOD city-within-a city project in Shanghai. Work on the 700,000 square meter project (gross floor area) began in 2014 and is expected to be completed in 2022. The project is the first in mainland China to be built above an operating rail station. Tianhui includes a subway station, an intercity high-speed railway station, low- and high-density residential space, and an office building with commercial space, a hotel and a community center. Through its work, RLP has advanced TOD concepts and the firm characterizes Tianhui as TOD 4.0, as it creates a high-density mixed-use development in harmony with a transportation hub and surrounding communities, producing a “complete living environment.”

CANADA—Transit-Oriented Development a First for the City
Winnipeg Free Press, June 26, 2020
In Winnipeg, the City Centre Community Committee recently approved rezoning proposals for the Corydon-Osborne area, making way for transit-oriented development and downtown revitalization. In addition to rezoning, the community approved a subdivision and variance proposal for a high-rise building on Osborne Street that will include residential and commercial spaces, bike parking, and the city’s first robotic parking garage. Because Osborne Street is home to more than 13 bus and rail transit stops, the project will be the city’s first transit-oriented development.

The 30-Minute City
David Levinson, Transfers Magazine, Spring 2020
The Spring 2020 issue of Transfers Magazine features an excerpt from “The 30-Minute City: Designing for Access” by University of Sydney professor and transportation analyst David Levinson. Levinson makes the case for accessibility through transit-oriented development. He uses the term “30-minute city,” drawing it from the Greater Sydney Commission’s 40-year plan which seeks to ensure that Sydney residents can reach one of three important regional centers in less than a 30-minute walk, bike ride, or transit ride. He argues for regional accessibility through transit—increasing job access by increasing the concentration of development and improving transit service and bike-ped infrastructure.