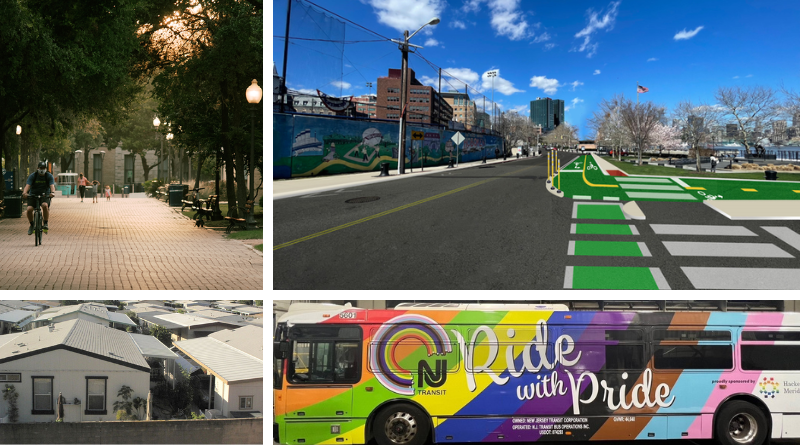 A new congestion pricing proposal for New York City would have commuters who drive to work paying a fee starting at the end of 2023. The U.S. Department of Transportation frames congestion pricing—a fee levied on drivers to encourage them to shun their cars and promote public transit, thereby reducing traffic congestion during rush hours—as “a way of harnessing the power of the market to reduce the waste associated with traffic congestion.” Congestion pricing may also earn the City a billion dollars a year, funds that it could use to fund its subway, bus, and rail system. Research shows that congestion pricing can also benefit low-income households of color, often concentrated near highways, by reducing the risk of health hazards caused by air pollution.

NEW YORK—New York MTA Is Lifting Covid-Testing Rule for Unvaccinated Workers
Skylar Woodhouse, Bloomberg, June 8, 2022
New York’s Metropolitan Transportation Authority will lift the mandatory weekly Covid-19 testing requirements for unvaccinated transit workers. The agency, which reported a shortage of 675 full-time positions in April, expects to recover pre-pandemic staffing levels in the fourth quarter of 2022 for train conductors and in early 2023 for operators who drive the trains. According to Demetrius Crichlow, MTA’s senior vice president for subways, crew shortages delayed 245 trains per day in April, or 3 percent of scheduled service, down from 632 trains delayed in December.

HOBOKEN—Hoboken Seeks More Input For Sinatra Drive Redesign
Kimberly Redmond, TAPintoHoboken, June 7, 2022
Community meetings and public input about Sinatra Drive, Hoboken—a well-regarded, scenic street in the City—has led to a new project to integrate Complete Street characteristics into the site. The initial feedback from the public supports green infrastructure, safety improvements for cyclists and pedestrians, and automobile traffic calming as priorities for the redesign. At the present time, Hoboken is seeking further comments and slates this summer for the final design concept presentation to the public.

How Can NJ Chip Away at Its Affordable Housing Crisis? Advocates Have Creative Solutions
Ashley Balcerzak, NorthJersey.com June 6, 2022
Advocates offer several possible solutions to improve housing affordability in the Garden State. Their proposals include, but certainly aren’t limited to reforming zoning codes, expanding community land trusts, permitting accessory dwelling units, and using underutilized public land for housing.  Each of these ideas can help, but when implemented together may be able to put a dent in the cost of housing

NJ Transit Celebrates Pride Month, Raises Awareness of Inclusion
RLS Media, June 4, 2022
This Pride Month, NJ TRANSIT will unveil two Ride with Pride-themed buses to celebrate the LGBTQIA+ community and its allies. The bus wraps will be on display throughout New Jersey’s transit system. The Ride with Pride wraps, designed in partnership with sponsor Hackensack Meridian Health, are meant to demonstrate support and raise awareness for the LGBTQIA+ community. “New Jersey is one of the most diverse states in the nation, and our differences are to be celebrated,” said Robert C. Garrett, the CEO of Hackensack Meridian Health.

OKLAHOMA—Cherokee Nation Gains Self-Governance Over Transportation Projects
Michael Overall, Tulsa World, June 8, 2022
In a historic moment in both transportation and Native American sovereignty, the Cherokee Nation and the federal government have signed an agreement allowing the former to construct roads and transit projects without direct federal oversight. With two electric buses already in service, the tribe hopes the agreement will enable more investment for the expansion of their transportation services and infrastructure.

‘We’re All Afraid’: Massive Rent Increases Hit Mobile Homes
Abha Bhattarai, Washington Post, June 6, 2022
One of the last bastions of housing affordability, the mobile home, is seeing an expansive increase in rents that stands to price many fixed- and limited-income people out of housing. Municipalities frequently consider mobile homes as blight and restrict where they are located. The housing crisis is creating a squeeze where people priced out of other forms of homes are turning to mobile homes. This increased demand  is escalating prices, making these homes unaffordable for those who have resided in them for years.

TEXAS—Plan to Update Urban Trails, Sidewalks and Bike Lanes Prioritizes Equity
Samuel Stark, Austin Monitor, June 3, 2022
ATX Walk Bike Roll, a program in the Texas capital of Austin charged with updating the City’s urban trails, bike lanes and sidewalks, has responded to concerns about equal access to the planned amenities with a revamp in its engagement with communities. Meeting with community ambassadors from underrepresented Austinites, the program aims to learn what bicycle and pedestrian infrastructure would best serve their needs while balancing the potential for displacement.

How Open Tap-to-Ride Payments Improve the Passenger Experience
U.S. Bank, Government Technology, June 1, 2022
According to Visa’s Future of Urban Mobility study, 88 percent of riders surveyed expect tap-to-ride payments on trains and buses. The report also states that more than 700 upcoming transit projects in the U.S. include the introduction of contactless tap-and-go payment methods. Through open-loop contactless transit solutions, passengers can tap their credit card, debit card, or mobile wallet to pay for a ride in less than a second. However, a move away from crowded kiosks, prepaid rides, paper tickets, and outdated cash-handling fare collection systems demands collaboration between transit operators, transit solution software and fare engine providers, and payment gateways.

Less Parking Could Mean More Housing
Erika Bolstad, The PEW Charitable Trusts, June 8, 2022
The housing crisis and environmental concerns are forcing many U.S. cities and some West Coast states to reconsider mandates requiring all homes, offices, and businesses to provide a minimum number of parking spaces. Oregon, short of an estimated 111,000 housing units, is poised to enact a law eliminating minimum parking requirements in eight metro areas. Similarly, proposed legislation in California would prohibit local governments from imposing minimum parking requirements on development within a half-mile of a public transit stop.

NEW YORK—Blighted Building Demolished to Make Way for New Development at 205 Osborn Avenue
Denise Civiletti, Riverhead Local, June 8, 2022
On the corner of Osborn Avenue and Court Street in Riverhead, a blighted one-story building next to the Riverhead Free Library was demolished to make way for a 50-foot-tall, five-story mixed-use building. The $19.6 million development, the first to be undertaken in the Railroad Avenue Overlay District, which allows increased density and incentivizes new construction around the Riverhead train station, will be built by Huntington developer G2D Group. The project will offer 37 market-rate rental apartments featuring 24 one-bedroom, ten two-bedroom, and three studio units.

NEW YORK—Five Developer Groups Submit for LaSalle Station Redevelopment Project
Jonathan Epstein, The Buffalo News, June 8, 2022
Looking to revitalize a prominent corner of Buffalo, the City has enabled multiple developers to construct transit-oriented developments along its main street in order to leverage both the proximity of transit infrastructure and the potential of mixed-use development. Buffalo aims to include “affordable and/or mixed-income housing units” and replace an existing cement structure in the station that will be a core engine for the new development.

NEW YORK—New York Pledges to Make Transit Network More Bike-Friendly
Christopher Carey, Cities Today, June 7, 2022
Set to launch later in 2022, the Metropolitan Transportation Authority is drafting a plan to increase the connectivity, safety, and convenience of bicycle, pedestrian and micromobility travel to its facilities and services. Noting it as a matter of equity and carbon emissions reduction, the initiative aims to draw from global best practices to ensure a comprehensive approach to addressing the missing links in NYC’s walkways and bike paths.

CALIFORNIA—Affordable Housing Decreases Crime, Increases Property Values
School of Social Ecology, University of California-Irvine, June 8, 2022
The Livable Cities Lab at UC Irvine released a study of affordable housing in Orange County California that reports a decrease in assaults and robberies and an increase in property values within a mile of the new housing, with most value gains coming from within 0.2 miles of the affordable units. These findings counter commonly-expressed fears that affordable housing will negatively affect neighborhoods.

NEW YORK—Governor Hochul and Governor Murphy Announce Major Step Toward Modernization of Penn Station
NJ Governor’s Office, June 9, 2022
The MTA, Amtrak, and NJ TRANSIT released a request for proposal regarding Penn Station’s Reconstruction outlined in the Penn Station Master Plan. Their goal is to make Penn Station into a “first class transit hub” and to increase the public space and access to the platforms of Penn Station.

OHIO—How Area Communities Are Building Small Transit Solutions to Solve Big Issue of Sprawl
Conor Morris, Fresh Water Cleveland, June 9, 2022
As Greater Cleveland Regional Transit Authority has been stretched to cover the needs of a more dispersed population, several new ideas have sprouted up to help cover the sprawl. These concepts include a publicly funded rideshare service and repurposing church buses to operate on weekdays. Additionally, the Paradox Prize has awarded $800,000 in grant funding to eight teams in Northeast Ohio working on improving job access through transit. This grant provides funding for scalable pilot programs to help resolve the paradox of an individual needing a job to afford a car and needing a car to get to that job.

INDIA—Transit-Oriented East Delhi Hub to be Ready by October 2024
Faizan Haidar, The Economic Times, June 7, 2022
A pilot program for interweaving transit-oriented development into India’s built environment is slated to launch in East Delhi by 2024. Over 60 acres of land is set to be the site of the project, with some 1,500 units proposed for one of the most populous areas on Earth. If successful, the development could prove to be a model for the country.

CANADA—Residents Concerned Halifax Transit Won’t Keep Up with Growth
Danielle Edwards, CBC News, June 4, 2022
Population growth in the port city of Halifax in Nova Scotia has created new unmet demand for transit, and residents are increasingly expressing concerns about whether the Halifax Transit system will keep pace. The city government approved two new rapid transit projects in 2020, but discussions on density and commuter rail have presented fissures on the road to matching the growth of transit services with that of the population,  forecast to reach a half million residents within five years.