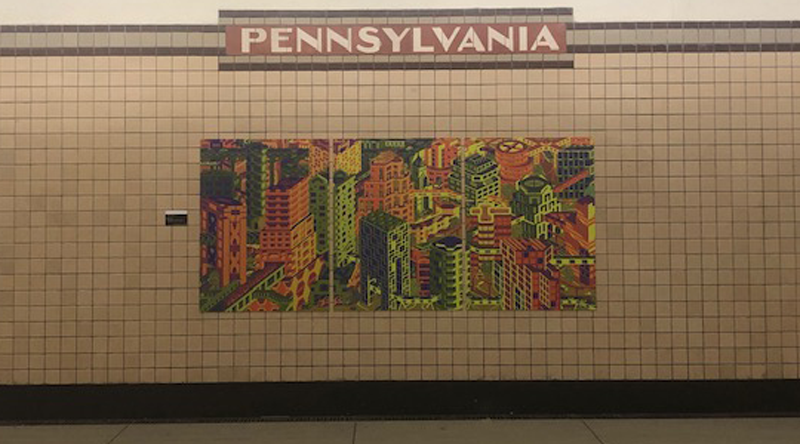 The City Contingent and Eternal 2 by Michael DalCerro, one work displayed as part of the TRANSITional Art Program.

NJ TRANSIT Unveils Transit Art Project at Newark Penn Station
NJ Transit News, October 10, 2019
NJ TRANSIT and the TRANSITional Art Program will showcase New Jersey art and talent through an art exhibition at the Newark Penn Station. The temporary public art space called ‘Dwell Time,’ will operate from October to December and feature paintings, installation, videos, and a giant children’s book that will be displayed on the windows of a bus shelter. Artists will be given a $1000 stipend to offset installation and development costs. Participating talents include Serena Bocchino (painter), Michael Dal Cerro (visual artist), Juliacks (animator), and Marylou and Jerome Bongiorno (filmmakers). Musicians Eun Hee Ahn, Edwin Estremra, Xiaofang Chen, Jeff Snyder, and Yasmine Rana will be featured in performances for the “Music in Motion” program.

Englewood Cliffs Affordable Housing Trial Begins, Could Bring Hundreds of Units to Borough
Katie Sobko, North Jersey Record, October 11, 2019
The trial stemming from a 2015 lawsuit filed by Normandy Real Estate Partners against the Borough of Englewood Cliffs began on Friday, October 7. Normandy brought the suit in support of its plan to redevelop 800 Sylvan Avenue, the site of the former Unilever campus. The developer seeks authority to negotiate with the NJ Fair Share Housing Commission, with the goal of building 600 units on the 20-acre property, 100 of which would be considered affordable units. In August, the court found the borough constitutionally non-compliant in its affordable-housing obligation.

A Closer Look at Cranford’s Downtown Boom
Chris Fry, Jersey Digs, October 14, 2019
As more and more New Jersey cities turn towards a transit-oriented development approach, planners can look to Cranford Township as a model for redevelopment and improvement. In the 1980s, Cranford officials established the state’s first Special Improvement District and have since embraced transit-oriented development in support of the downtown. Recently-built residential apartments and historic buildings flank Cranford Station, which provides service via the Raritan Valley Line. With a walkable downtown and a growing retail base, Cranford offers a model of utilizing transit assets as a resource to bring residents and businesses into downtown.

NJ Transit Plans Nicer Stations Where Riders Can Wait Out Delays
Elise Young, Bloomberg, October 15, 2019
The busiest US train route is getting $100M in station upgrades soon. After years of neglect and financial cuts, NJ TRANSIT and Amtrak plan to invest in improvements at multiple stations along the Northeast Corridor, namely at Elizabeth, New Brunswick, Princeton, and Trenton. In Elizabeth, $71M will go to building a replacement station, while New Brunswick will see the construction of a pedestrian walkway linking the station to The Hub, a proposed incubator for science and technology that is a part of the city’s downtown redevelopment plan. Other improvements include longer and reinforced platforms, renovations to escalators and elevators, as well as new paint and stairwell improvements. Federal Transit Administration and the New Jersey Transportation Trust Authority funding will support the projects.

Development of ‘Golden Triangle’ in Riverside Picking Up Steam
George Woolston, Burlington County Times, October 16, 2019
Following construction delays attributed to soil conditions at the site, work on the Camelot at Riverside development project is finally progressing. On Monday, Kaplan Communities, received approval from the Riverside Planning Board for its amended site plan that reduces the number of market rate units from 200 to 170. The project will be built adjacent to the Keystone Watch Case Building, which is also to be redeveloped into 64 residential units by Brooklyn-based developer Simshabs XI. Both projects are located in the Golden Triangle, the redevelopment area bounded by the Rancocas Creek, Pavilion Avenue, and the NJ TRANSIT River LINE, and located in the center of Riverside, adjacent the Riverside Light Rail Station.

Trottenberg: 14th Street ‘Will Be a Template’
Gersh Kuntzman, Streetsblog NYC, October 10, 2019
Following the success of the car-ban on 14th Street, New York City Department of Transportation Commissioner Polly Trottenberg told the audience at the Vision Zero Cities conference at Columbia University that the project would “be a template for other parts of the city.” The next location for a car ban is still under discussion, but the Commissioner and her team promise more room for buses on the street in the next few months. The Commissioner insists that the efforts to invest in public transit is not a “war on cars,” but an incentive for people to use private vehicles less frequently.

Why the Bus Got So Bad, and How to Save It
John Surico, CityLab, October 10, 2019
The story of the 14th Street Miracle is inspiring many. Steven Higashide, author of Better Buses, Better Cities: How to Plan, Run, and Win the Fight for Effective Transit sat down with Citylab to discuss how federal transportation policy limited bus innovation and funding, and how advocates, riders, and city officials play a role in restoring American bus systems to world-class quality. They discuss building better bus stops, implementing letter grades for bus lines, and increasing service on routes—simple ways that increase ridership, but have been neglected by planners and policymakers for far too long.

Who’s Afraid of a Transit Desert?
Stefanos Chen, New York Times, Oct. 11, 2019
Growing demand for affordable housing in New York City is pushing development into ‘transit deserts,” remote neighborhoods in which it would take more than 15 minutes to walk to the nearest transit stop. As transit-oriented development drives residential prices up, more new development projects are proposed on significantly cheaper land farther from the subway or bus stops. These developments are attracting New Yorkers who welcome the non-traditional commute and prefer peace and quiet away from the city.

The Future of Transportation Is … Not Cars, Not Even Autonomous Ones
Gary Vasilash, Autoblog, October 13, 2019
NACTO (National Association of City Transportation Officials) recently released a second edition of Blueprint for Autonomous Urbanism, hoping to inspire American cities to take steps towards non-automotive modes of transportation. To “avert dystopian outcomes” from a focus on private cars and single occupancy vehicles, NATCO urges a reprioritization to include pedestrians, bicyclists, and fixed-route transit (city buses and trains). The report recommends several ways to reduce automobile use, including increasing ride hailing fees for taxis and ridesharing vehicles, establishing congestion charges, and pricing the curb for parking and loading time. The Blueprint for Autonomous Urbanism encourages innovation, policy change, and a shift in focus away from the perils of the automotive era.

Transit Tech Lab to Tackle New Challenges in 2020 Accelerator
Kristin Musulin, Smart Cities Dive, October 15, 2019
The Transit Innovation Partnership will be holding a second round of Transit Tech Lab, its 10-week accelerator program for solutions to New York City subway and bus problems. The TIP, a public-private collaboration between the New York MTA and the Partnership for New York City, selected four companies last July to pilot their projects with the MTA. In 2020, entrepreneurs and growth-stage companies are invited to submit their pilot solutions in three main challenge areas: accessibility, traffic coordination, and revenue generation. Other agencies and organizations have joined as partners of the 2020 Transit Tech Lab to encourage the pilot testing and help with the implementation process. Port Authority of New York and New Jersey, New York City Department of Transportation, New York City Taxi and Limousine Commission, NJ TRANSIT and Amtrak have already shown support.

Pitt Paper Shows Parking Spaces Near East Liberty Busway Station Are Under Utilized by 30 Percent
Ryan Deto, Pittsburgh City Paper, October 16, 2019
A recent study by a former University of Pittsburgh graduate student found that developers have built too much parking near transit facilities, even to accommodate peak usage. In her report, “Measuring the Parking Characteristics of the Transit-Oriented Development,” Jeanne Batog documented that at least 200 parking spaces were vacant even during peak times at the East Liberty busway station. Ms. Batog, who now works as a traffic engineer in Delaware, argued in the study that the unused space could have been utilized for the development of mixed-use buildings or residential spaces, and urged developers to “focus on housing density and trying to limit the number of parking spaces built.”

It’s Not Just Light Rail. Capital Metro Wants to Expand Rapid Bus Service, Too.
Samuel King, Austin Monitor, October 16, 2019
Capital Metro in Austin, Texas plans to add five new lines to the Metro Rapid system in the hopes of creating a seamless bus system. Metro Rapid, the city’s rapid bus line, benefits from having priority lanes in the downtown area and signal prioritization that allows the service to be faster than local bus service. Ridership on existing bus lines has increased in the past year, which Capital Metro sees as both a success and an area in need of improvement. The agency hopes to link the bus system to two new transit lines, the Orange and the Blue Lines, an integration dubbed Project Connect. Austin City Council and the Capital Metro Board plan to present Project Connect to voters in a November 2020 ballot referendum.

INDIA – All You Need to Know About Bengaluru’s New Bus Priority Lane Plan for ORR
Sameer Shisodia, Citizen Matters, October 15, 2019
Starting November 1, Bangalore will be implementing a ‘bus priority lane’ between Silk Board and KR Puram on the Outer Ring Road (ORR). Buses are still allowed on other lanes, but the bus lane is set to exclusively serve BMTC buses and ambulances that need to run at higher speeds. Bangalore citizens can anticipate the addition of 45 new buses exclusively for this corridor. The Bangalore Metropolitan Transport Corporation (BMTC), BTP (Bengaluru Traffic Police) and DULT (Directorate of Urban Land Transport) are coordinating to run the pilot as early as October 20. If all goes well, the project will increase bus speeds from 10kph to 18-20kph and bus occupancy in the lane from 65 to 90%.  Plans for bus lanes in 12 other corridors are also underway, but final decisions on design and implementation depend on the outcome of the ORR pilot.

MALAYSIA – PM: Sustainable Transport System to Boost Malaysia’s Growth
Malay Mail, October 17, 2019
Prime Minister Tun Dr Mahathir Mohamad launched the National Transport Policy 2019-2030 in Kuala Lumpur this week, committing to “provide a sustainable transport system that will contribute to the country’s economic growth and ensure the people’s well-being.” The policy aims to bring more business and internationally competitive technology to the nation, while maintaining an equitability-focused economy, as per the Shared Prosperity Vision 2021-2030. Malaysia aims to encourage public transit through construction of dual-track electric rails, use of rail lines for heavy freight and larger cargo, and transit-oriented development.

September 24, 2019 Stephanie DiPetrillo Comments Off on Phil Abramson: The Key to Transit-Oriented Development