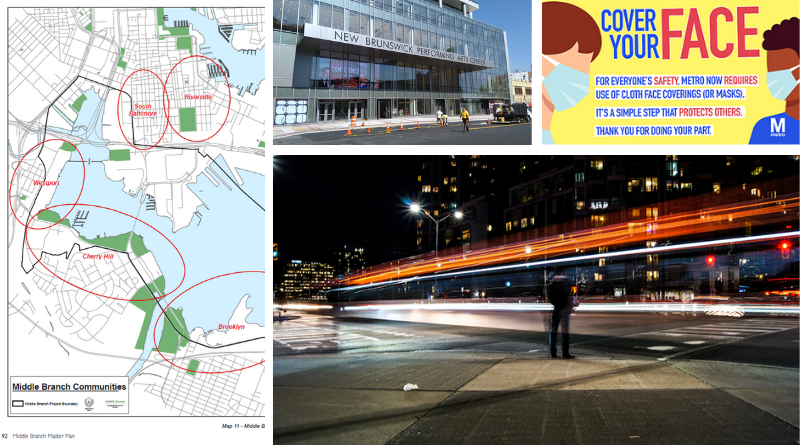 Study Finds Regional Pact to Reduce Transportation Pollution Could Yield Major Health Benefits
Barbara Moran, WBUR National Public Radio, October 6, 2020
Researchers at the Harvard Center for Climate, Health, and the Global Environment, the Boston University School of Public Health, and the University of North Carolina have released a preliminary analysis of the health impacts of the regional Transit & Climate Initiative (TCI), a collaboration of 12 Northeast and Mid-Atlantic states and the District of Columbia that seeks to improve transportation, develop the clean energy economy, and reduce carbon emissions produced by the transportation sector. The researchers have found that the plan that would reduce greenhouse gases the most would also yield the biggest health benefits. In the first decade after implementation of the initiative, the benefits would include the avoidance of 1,100 deaths and nearly 5,000 asthma cases, and produce health cost savings of $11.1 billion. The study examined five policy scenarios that varied caps on greenhouse gas emissions and different ways to invest proceeds from distributor fees. The highest level of benefit would come from a 25 percent reduction cap in emissions invested in transit expansion and maintenance, low and zero-emission buses and trucks, and walking and biking infrastructure improvements.

NEW YORK—Electric Bikes and Scooters Are the Future of Transit in NYC
Shaye Weaver, TimeOut, October 7, 2020
Transportation experts weigh in on the permanence of alternate modes of transportation, such as bicycles and scooters, which have gained popularity in New York City during the pandemic. Subway ridership numbers have taken an unprecedented beating during this time, but bike and bus ridership have soared. Danny Pearlstein of the Riders Alliance mentions the death spiral around the loss of ridership in public transit systems that can result when users find other ways of getting around. Assuming that these means of transportation are here to stay, experts contemplate the possible expansion of bus lanes, bike lanes, and open streets to accommodate the “transportation renaissance” that the city is likely to see.

ONTARIO—Mississauga Considering Raising Transit Fares and Other Fees to Cope with COVID-19 Downturn
Ashley Newport, InSauga, October 8, 2020
Mississauga recently announced its decision to hike certain fees to combat the financial deficit it faces due to the effects of the pandemic. The city’s budget committee announced increases in charges on transit fares and other transportation-related fees. These changes will be presented to Council for approval on October 14th, and, if passed, will go into effect in 2021. The budget committee’s report proposes an increase in UTM student pass fees, in addition to the municipal public transport agency’s introduction of two new fees – a Transitway Access Permit Fee of $250 and a MiWay Stop Infrastructure permit review fee of $400 per stop location. In addition to these measures, the city has resorted to a host of other mitigation steps that include layoffs, hiring freezes, and cuts in discretionary spending.

Bringing Public Transit Back from the Coronavirus Pandemic
Jennifer A. Kingson, Axios, October 8, 2020
Low ridership and high fixed costs have severely affected public transit systems. Although these systems are cleaner now than ever before, public perception of unsanitary conditions continues to contribute to this loss and has simultaneously led to an increase in the use of cars for essential trips. Henry Cisneros, former San Antonio Mayor, and U.S. HUD Secretary, emphasizes the need for city officials to focus on increasing public confidence in mass transit systems. Campaigns have begun at various locations, such as in Washington D.C. where individually wrapped face masks are available for riders at metro stations.

Federal Government to Offer $10M to Research COVID-19 Spread on Public Transportation
Aaron Boyd, Nextgov, October 7, 2020
The Federal Transit Administration, through its Public Transportation COVID-19 Research Demonstration Grant Program, will allocate $10 million in research grants to find innovative solutions that address health and safety concerns for users and employees of public transit systems. This grant program focuses on four key areas—cleaning and disinfection of infrastructure, exposure mitigation, innovative mobility solutions, and measures to increase confidence in public transit. Although the program targets busy transportation hubs in urban areas, it also includes a specific provision for the improvement of neglected infrastructure in rural areas. The FTA reports that the current allocation of $10 million is slated to be increased as more funds are dedicated to the program.

CityLab Daily: Will Pandemic-Era Voters Support Public Transit?
Linda Poon, Citylab Daily, October 6, 2020
Transit experts are expressing concern over the future of at least $1.4 billion in transit measures that are at stake on local and state ballots this election cycle. Public transit projects, which would be funded by a large portion of this amount, have traditionally seen strong backing from voters. However, support may be limited now that transit use is significantly lower due to job cuts and an ongoing work-from-home situation. Having said that, campaign leaders hope that public transit will see support from communities of color. Transit has been indispensable for essential workers, many of whom belong to these communities; through these transit measures, leaders hope to achieve greater equity in the country.

Living in. New Brunswick, N.J.: Big-City Amenities with a Small-Town Feel
Kathleen Lynn, The New York Times, October 7, 2020
The New York Times Real Estate Section’s weekly focus on a local market has turned its sights to our very own college town of New Brunswick. Home to Rutgers University, Johnson & Johnson, and the Robert Wood Johnson Medical Center, the medium-sized central New Jersey city offers residents and visitors ample cultural, entertainment and dining opportunities. Years of redevelopment have brought many new residential choices, including high-rise luxury apartments. The city is served by two train stations, including the New Brunswick Station at the center of downtown and the basis of the city’s designation as a New Jersey Transit Village.

Plainfield Planning Board Hearing on Watchung Ave Mixed Use Project Scheduled for Oct. 15
Jenifer Popper, TAPinto.net, October 5, 2020
The Plainfield Planning Board may reach a decision on October 15th on the application of a new mixed-use project at 400-04 Watchung Avenue. This project will entail the demolition of the existing building to make way for a six-story mixed-use development, which will include an art studio commercial space on the first floor and 118 market-rate apartments (with 89 live-work units) on the upper floors. The project will also include 77 off-street, ground-level parking spaces and several amenities like event spaces, co-working spaces, and fitness and yoga rooms.

Proposed Law in Jersey City Would Change How Affordable Housing Is Built
Joshua Rosario, NJ.com, October 5, 2020
The City Council of Jersey City will introduce an ordinance that requires residential project developers, who have received use variances or permissions to build increased density or height, to set aside 20 percent of their total project units for affordable housing. This measure is designed to provide increased housing options, especially for the third of the city’s cost-burdened households. Developers will be permitted to forgo a part of this requirement through a buyout provision that calls for payment to the city of between $25,000 to $100,000 per unit. These fees will be added to Jersey City’s Affordable Housing Trust Fund. However, all developers will be required to meet at least 5 percent of the required affordable units on-site, even if they use this option. This law faces criticism from multiple councilpersons who believe that it favors developers over households in need, and will grant them excessive flexibility.

Luxury Apartments Set to Open in Red Bank Next Year
Nicole Rosenthal, Patch Red Bank-Shrewsbury, October 2, 2020
Denholtz Properties is scheduled to complete work on The Rail, a new luxury apartment complex in Red Bank, in 2021. The 154,000 sq. ft. mixed-use development is located next to the Red Bank train station and will comprise 57 housing units and 6,000 sq. ft. of retail space. Denholtz Properties recently received $17.5 million in financing from JLL Capital markets for the construction.

TEXAS—The Hub Entertainment Venue Named as First Northline Tenant in Leander
Taylor Girtman, Community Impact Newspaper, October 8, 2020
The Northline, a mixed-use project in Leander, began construction in March this year. The 115-acre project is located in the city’s transit-oriented development area, and is envisioned as a mixed-use town center offering shopping, dining, and housing. The first announced tenant at this development is The Hub, a food, beverage, and entertainment venue that will include restaurants, bars, shops, a central lawn, a patio area, an event stage, and a jumbotron with daily and evening events.

UTAH—Developer Will Build 170 Rental Units on 12 Acres Along the Jordan River in Salt Lake City’s Poplar Grove Neighborhood
Taylor Anderson, Building Salt Lake, October 8, 2020
CW Urban plans to add to its stock of mid-density townhomes in Salt Lake City with a new project, The Yard. The new development will be located at 1230 West 200 South, a 12-acre site currently in industrial use. The site is proximate to the Fairpark TRAX station. The developer plans to integrate the project with its immediate surroundings with the inclusion of a 50-foot midblock walkway from the neighboring Jordan River to Navajo Street, creating active public gathering spaces.

CALIFORNIA—Governor Newsom Signs Major Housing and Transit CEQA Streamlining Bill
Nossaman LLP, Lexology, October 6, 2020
The national law firm, Nossaman LLP, recently posted a summary of AB-2731, the California Environmental Quality Act (CEQA): City of San Diego: Old Town Center Redevelopment. Governor Newsom signed AB 2731 into law on August 29, 2020. The measure supports the redevelopment of the Navy Old Town Campus in downtown San Diego, and allows San Diego Association of Governments (SANDAG) to acquire a portion of the site for a new transit facility. Moreover, it calls for expedited judicial review of future CEQA challenges to SANDAG’s Environmental Impact Report evaluating the facility. AB 2731 encourages disputes to be resolved through public engagement rather than litigation. To qualify for this streamlined process, AB 2731 requires that the future transit facility results in no increases in greenhouse gas emissions and supports substantial reductions of single-occupancy vehicle use in the region. AB 2731 passed without opposition in both houses of the California Legislature and is considered to be one of the most significant CEQA streamlining bills enacted in 2020.

MARYLAND—Developer Plans Mixed-Use Project on Westport Waterfront Formerly Owned by Kevin Plank
Lorraine Mirabella, The Baltimore Sun, October 6, 2020
Stonewall Capital, a Baltimore County-based developer, plans to build a mixed-use community on one of the area’s last undeveloped waterfront sites. The 43-acre site is in Westport, a predominately Black neighborhood in South Baltimore, that lies on the Middle Branch of the Patapsco River and adjacent to the Westport Light Rail Station. Plans for the site are preliminary, and will be developed with input from the community and city officials. Ray Jackson, Stonewall principal, foresees a mix of housing, offices, and retail uses.

GEORGIA—On DeKalb’s Memorial Drive, New Revival Plan Brings Cautious Optimism
Tyler Estep, Atlanta Journal-Constitution, October 5, 2020
Part photo-essay, part lament … this article explores decades of disinvestment and the hope for renewal along Memorial Drive, a five-mile corridor connecting I-285 at Decatur and Stone Mountain. A new plan, the Memorial Drive Revitalization Plan, proposes to improve aesthetics, increase density, and work to make the area more appealing to residents and developers. The plan, together with proposed transit-oriented development at the nearby Kensington MARTA station, form the basis for this renewed hope.

CANADA—NCC Takes Next Step in LeBreton Flats Development
Andrew Duffy, Journal Pioneer, October 7, 2020
The National Capital Commission recently announced that on October 30th it will release a request for qualifications (RFQ) to develop a one-hectare site, just east of Pimisi LRT station in Ottawa. This is the start of what is expected to be a decades-long, multi-stage process to redevelop the 29-hectare LeBreton Flats site. The first phase focuses on the so-called “library parcel”—land just west of the site slated for Ottawa’s super library. The RFP will prequalify development teams that can meet the commission’s vision for the site, which includes net-zero design for carbon emissions, affordable housing, pedestrian and cycling connections to existing pathways, and cultural components. NCC plans to approve teams in the first half of 2021 and choose a development partner by the end of 2021. The start of construction is planned for 2022.