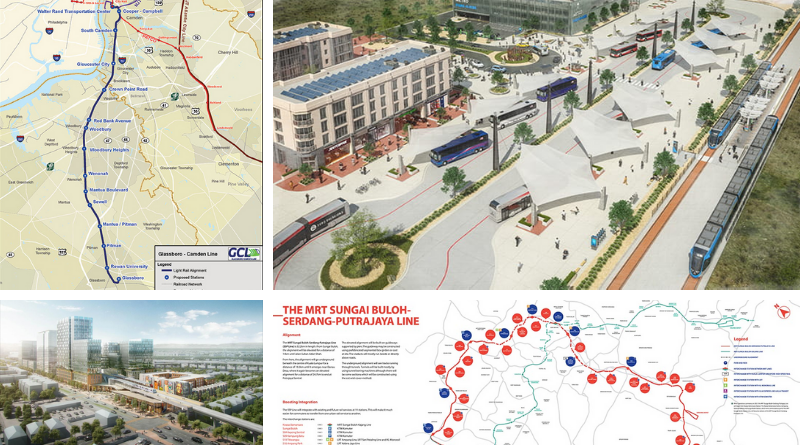 In 2010, Fairfax County, one of the nation’s highest-income counties, adopted a highly successful redevelopment plan in its Tysons Area. Since then, thousands of multi-family housing units have been built in this wealthy suburb—a rare feat. At the center of this effort is the Tysons Land Use Task Force, comprised of Fairfax homeowners, individuals with real estate or other business interests, and transit-oriented development advocates. Its success can be attributed to the alignment of the task force members’ interests to create dense, pedestrian-scaled development around the area’s Silver Line stations with limited incursions into the area’s existing suburban fabric. With its success, the Tysons plan has paved the way for other high-income suburbs to include multi-family housing at lower prices with access to transit and similar social and economic benefits.

Transit Agencies Rethink Future of Commuter Rail
Dan Zukowski, Trains Magazine, November 4, 2020
The Coronavirus pandemic has revealed unforeseen patterns in public transit dependency among city dwellers, with more riders depending on city buses than on suburban trains for their essential commute. Across the nation, train ridership numbers fell by 90 percent from April to June; in comparison, bus ridership fell by 65 percent. To keep pace with these changes, Massachusetts Bay Transportation Authority (MBTA) plans to restructure its transit system to maintain and increase service to “transit-critical” populations and reduce service in other areas. With continuing uncertainty amidst the pandemic, MBTA will reallocate funds from capital investments to preventative maintenance to ensure optimum spending of limited resources. 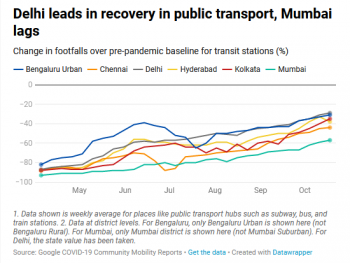 INDIA—How the Pandemic Has Changed City Commutes, in Six Charts
Rangoli Agrawal, Mint, November 2, 2020
Indian cities are seeing increased economic activity and public mobility as COVID-10 caseloads fall. With this heightened activity, however, private transportation in the nation has experienced a faster rebound than public transit. Although trailing urban centers in other parts of the world, New Delhi has shown the most significant recovery in its transit use among Indian cities during this period – ridership numbers have reached between 15 and 20 percent of pre-lockdown levels. Other Indian cities have shown even more unstable and slower public transit recoveries, with most residents choosing to resort to private transportation. Transit recovery has significantly lagged for weekday commutes, possibly due to sustained work-from-home behaviors and an increase in non-work-related trips.

COVID Reopenings: Despite Easing of Local COVID-19 Restrictions, Public Transit Ridership Slow to Rebound
Da Lin, CBS, November 1, 2020
Despite numerous confirmations from health officials that there have been no instances of COVID-19 outbreaks linked to public transit, most Bay Area transit agencies continue to report low ridership numbers. Former public transit riders attribute their apprehensions to the psychological fear of riding on public transit in a global pandemic. In response, transit agencies have launched pilot programs to ensure increased safety aboard trains and buses. Some initiatives include upgrading air filters onboard, using UV light to kill the COVID-19 virus, and deploying longer trains during commute hours. Although it will be well into 2021 before all such measures are in full swing, UCSF epidemiologist Dr. George Rutherford believes these measures will go a long way toward putting passengers’ anxiety at bay.

More Apartments Coming to Plainfield Near NJ Transit Rail Line
Bob Makin, My Central Jersey, November 6, 2020
The Plainfield City Zoning Board recently approved a project to build apartments in the transit-oriented development Netherwood Zone. The approval came with variances in the form of increased density, building height, and ground-floor dwelling units. As per Plainfield Land Use Ordinance, the purpose of the Netherwood Zone is to provide a mix of commercial and high-density residential uses near the Netherwood train station. In keeping with these requirements, the new development will add 12 apartment units to the area.

When It Comes to Light Rail Expansion Question Remains, North or South?
Al Sullivan, TapInto, November 3, 2020
According to city officials, plans for development near the foot of the Bayonne Bridge at the community’s south end may be limited due to a lack of public transit options near the site. Officials recognize that proposals to expand the Hudson Bergen Light Rail (HBLR) past its current terminus at 8th Street are unlikely in the near term. The COVID-19 pandemic and related financial deficits have derailed most expansion and development efforts for the line. Moreover, plans to extend the HBLR southward rank behind ones to bring the service to Route 440 in Jersey City’s west side as well as to extend it northward into Bergen County.

Glassboro-Camden Line: Draft EIS Public Comment Period
Glassboro-Camden Line, November 2, 2020
A 45-day public comment period on the Draft Environmental Impact Statement (DEIS) for the proposed Glassboro-Camden Line (GCL) opened on November 2nd and will end on December 17th. As part of the DEIS public participation process, the GCL Project Team will hold virtual public hearings via Zoom on Tuesday, November 17th (6-8pm) and November 19th (3-5pm). The Draft EIS and other information can be accessed online. The proposed line would reestablish passenger rail service along an existing rail line that connects Glassboro to Camden. Proposals call for the use of light rail vehicles similar to those used on the NJ TRANSIT River LINE.

Transit Oriented Development Projects Advance at NJ TRANSIT Properties
NJ TRANSIT Press Release, October 30, 2020
NJ TRANSIT has announced that it is seeking developers to design and build transit-oriented development projects on agency properties located in Jersey City and Woodbridge. The agency is accepting Statements of Qualifications and Expressions of Interest for development of two acres of land on Communipaw Avenue in Jersey City, near the Liberty State Park Hudson-Bergen Light Rail station. This property is zoned for mixed-use redevelopment. The agency is also soliciting Statements of Qualifications and Expressions of Interest for 12 acres located directly adjacent to the Metropark Station on the Northeast Corridor Line, one of the busiest train and bus stations in the NJ TRANSIT system. Project information for both sites is available at njtransitdevelopment.com.

FLORIDA—Brightline Plans to Create High-Speed Passenger Rail Lines Connecting Orlando to Miami — Here’s How
Ken Storey, Orlando Weekly, November 5, 2020
Brightline has announced its plans to move forward with its high-speed project to connect Orlando to Tampa. Similar to the West Palm Beach-to-Miami service, the proposed Tampa connection will comprise a newly-built track and use existing high-speed-rail right-of-way along the median of US I-4. Brightline typically uses its stations to spur local development projects to create dense, multi-transit communities near stations. The agency has begun purchasing property near the proposed Tampa station to accommodate such new development.

CALIFORNIA—West Oakland Megaproject on BART Land Moves Forward
Ted Andersen, San Francisco Business Times, November 5, 2020
The Oakland Planning Commission approved the final development plans for two phases of Mandela Station, a transit-oriented development project. The $690 million development will comprise a mix of residential, retail, and office spaces, as well as public plazas and pedestrian walkways. The mixed-use project is part of BART’s plans to revitalize the area by increasing ridership and boosting revenues. The project is yet to come before the Oakland City Council for final approval and, if approved, will break ground in early 2022.

Mixed Results for US Election Transit Initiatives
David Peter Alan, International Railway Journal, November 5, 2020
State and municipal ballots across the nation gave voters the chance to decide on 16 measures, a total of $38 billion in potential transit funding. Caltrain was among the big winners, with voters approving a measure to increase the sales tax to provide a dedicated funding source for the organization. Similarly, voters in Austin, Texas, approved Project Connect, an initiative to improve bus and rail transit by adding to existing lines in the city, creating new routes, and constructing a new city center tunnel for the light rail service. The project will also include new affordable housing and transit-oriented development construction in the area. However, voters in Portland, Oregon, and Gwinnett County, Georgia rejected measures to construct a new light rail line and increase the sales tax to increase transit connections in the city, respectively.

COLORADO—Jones District Moves Along: 5 Things to Know
Ellis Arnold, Centennial Citizen, November 2, 2020
Centennial’s historic Jones District, the municipality’s first transit-oriented development, is slowly progressing. The project aims to develop offices, hotels, retail, and residential units along Interstate 25. After years of changes, the latest proposal for the development includes a maximum of 4 million sq. ft. of built space, half of which can be residential. The project will be required to have a portion of for-sale residential and for-rent apartments to produce the full amount of residential development allowed under the city’s rules. The plan aims to add a pedestrian plaza, public green spaces, restaurants, and retail spaces around the area and the RTD Dry Creek light rail station to promote walkability.

MALAYSIA—MRT2 to Revitalise Fringes of KL City Centre
Racheal Lee, The Edge Markets, November 2, 2020
The second line of the Klang Valley Mass Rapid Transit, the Putrajaya Line, will serve Chan Sow Lin, Bandar Malaysia, Kuchai Lama, and Salak Selatan when it fully opens in January 2023. Currently, these areas of Kuala Lumpur comprise factories and warehouses as well as pockets of modern mixed commercial developments. Property developers are confident that the new line will bring revitalization to the new station areas through land banking activities, and transit-oriented and transit-adjacent development. With increased commercial and high-rise residential development in the region, property consultants expect higher demand from young home buyers looking to reduce their reliance on the use of private vehicles.

INDONESIA—Jakarta Wins Global 2021 Sustainable Transport Award for Integrated Public Transportation
Alya Nurbaiti, The Jakarta Post, October 31, 2020
Indonesia has won the global 2021 Sustainable Transport Award (STA) for Jakarta’s integrated public transportation programs — the first ever for a Southeast Asian country. ITDP Indonesia believes that the inclusion of the city’s public minivan system in the Transjakarta extensive network and the launch of MRT Jakarta and LRT Jakarta has helped to transform the city’s transportation system. The city has made efforts to create multi-modal transit nodes, renovate city-owned public transportation systems, and incorporate pedestrian and bicycle facilities into its overall transportation plan.