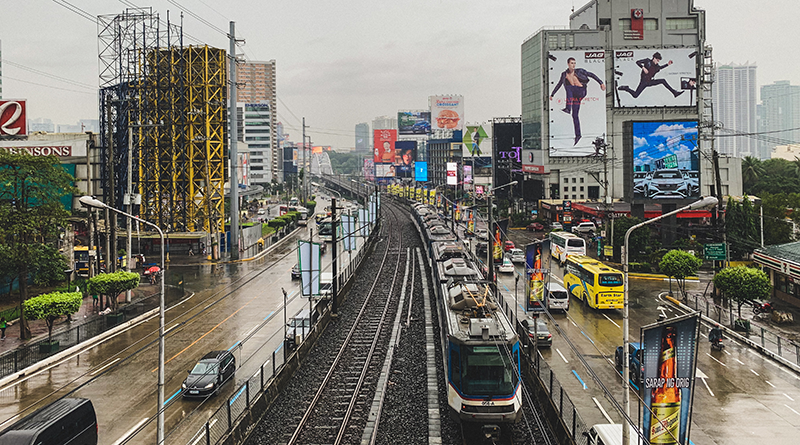 EDSA, Mandaluyong, Philippines by Eugenio Pastoral on Unsplash is in the public domain.

NJ TRANSIT Issues Solicitation for TOD Projects Near River Line Light Rail
John Jordan, Globe St., October 7, 2019
A 37-mile NJ TRANSIT right-of-way along the River LINE is the focus of agency efforts to develop vibrant TOD projects. NJ TRANSIT has issued a Request for Expressions of Interest from developers and joint venture partnerships to create thriving local communities and accelerate growth in 21 station areas across 15 municipalities along the path of the River LINE. NJ TRANSIT will host an “Industry Day” forum to discuss the offering and particular station areas on Friday, October 18. All interested firms are invited to attend.

The Only Mass Transit to the American Dream Mall is the Bus, and It’s Going to be Pricey
Larry Higgs, NJ.com, October 7, 2019
NJ TRANSIT has set prices for its new express bus service from the Port Authority Bus Terminal to American Dream retail and entertainment complex at $9 one-way or $18 round trip for adults. The agency plans to operate the 355 express bus to American Dream at 30-minute intervals. Several other local buses offer service to the mall. Parking at American Dream will accommodate 30,000 vehicles, although it is unclear whether patrons will be charged to park there. Currently, rail service between Secaucus and MetLife Stadium Station remains on hold until the agency can ensure that trains can run without negatively affecting regular commuter service.

NJ Transit Will Test Self-Driving Buses at Fort Monmouth
Carly Baldwin, Patch.com, October 9, 2019
NJ TRANSIT recently applied to the Federal Transit Administration (FTA) for grant funding to purchase three self-driving, electric shuttle buses. The autonomous shuttles have a capacity of 15 passengers and can travel up to 15 miles per hour. If NJ TRANSIT acquires the buses, the vehicles will undergo a trial phase on closed roads. If testing is successful, the agency anticipates using the buses on fixed routes. The final decision on the grant application is set for this winter.

The Hoboken Yard Redevelopment Plan: What’s Changed Since 2014?
John Heinis, Hudson County View, October 9, 2019
Hoboken’s Rebuild by Design redevelopment project has seen some changes since the original 2014 proposal. A proposed flood wall reduces the area of development to 1,357,000 square feet over three sites, with 944,000 square feet of “Future Potential Development.” The new plan calls for several green infrastructure elements, and features initiatives for increasing safety for bikers, bus-riders, and pedestrians. Officials anticipate completing the  RBD project by the end of 2022. City Council announced a community meeting on the proposed development will be held on Tuesday, October 15th, at the Multi-Service Center (124 Grand St.)

Ground Breaks for Long-Awaited Walnut Creek Transit Village
Annie Sciacca, East Bay Times, October 8, 2019
Construction of a mixed-use development has begun on 16 acres of a former BART station parking lot. When finished, the Walnut Creek Transit Village will comprise 596 apartments and 26,000 square feet of retail space. The developers have expressed a goal of improving both bicycle and pedestrian access to BART and access to bus routes. The project’s first phase, comprising 358 apartments and 14,500 square feet of retail, is slated to be completed in 2022.

D.C. Council Approves Blueprint for Development with Greater Emphasis on Housing
Fenit Nirappil, The Washington Post, ‎October‎ ‎8‎, ‎2019‎
With a vote last Tuesday, officials in the nation’s capital approved the framework for a new comprehensive plan that emphasizes the need for housing and affordable housing, and prioritizes affordable housing in land-use decisions and consideration of racial equity. D.C. has one of the highest rates in the country for displacement of low-income residents. Other portions of the plan, including policies related to transportation, environmental protection, green space, and art, will be available next week. Critics are concerned that the framework will not deter unchecked development.

Here’s How Southern California’s New Housing Units Could Be Distributed to Cities
Erin Rode, Ventura County Star, October 10, 2019
As part of a regional housing needs assessment, the Southern California Association of Governments (SCAG) is planning for the possibility of 1.3 million new homes between 2021 and 2029. In an effort to reduce commute times and automobile use, the planning organization’s proposed methodology emphasizes access to jobs and transit for future homes. SCAG will use a “social equity adjustment” to allocate housing and resources among Southern California cities.

City Council Will Vote Thursday on Proposed $600 Million Overhaul of Ronstadt Transit Center Downtown
Joe Ferguson, Arizona Daily Star, October 10, 2019
Redevelopment in downtown Tucson is underway. The Tucson City Council is expected to decide Thursday on a proposal to revitalize the downtown Ronstadt Transit Center. The project, to include a hotel, apartments, transit services and commercial space, will be located on 5.7-acres of city-owned land. The project needs FTA approval to redevelop the transit center to serve buses, bike sharing, shuttles, taxis and pedestrians.

PHILIPPINES – DoTr to Focus on Railway Dev’t in 2020
Denise A. Valdez, BusinessWorld, October 4, 2019
Railway projects comprise nearly all of the 2020 budget proposed by the Department of Transportation (DoTr), reflecting the focus of the Philippines on a modernization program that will aggressively expand the railway network to include commuter railways, subways, light rails, and national railway tracks to connect major regions of the country. Representatives say that repairs on the MRT-3 (Mass Rapid Transit) line are scheduled for completion by July 2021, and that starting in the second half of 2020 trains will be gradually rolled out for regular operations.

INDONESIA– Five Cities Get 21M Euro Grant to Develop Public Transportation, BRT System
Riza Roidila Mufti, The Jakarta Post, October 10, 2019
Five cities in Central Java will receive grants of 21 million Euros from the governments of Germany, Switzerland, and the United Kingdom to develop Bus Rapid Transit (BRT) services in the cities. The cities have been selected to pilot and develop SUTRI NAMA (Sustainable Urban Transport Program Indonesia) and INDOBUS (Indonesian Bus Rapid Transit Corridor Development). The two transportation projects began in 2017 when the Indonesian Transportation Ministry signed an agreement with the German development cooperation agency, Deutsche Gesellschaft für Internationale Zusammenarbeit (GIZ), which bridges the Indonesian government and the grant providers. A goal of the projects is to develop environmentally friendlier public transportation systems through reduced personal auto use, gas emissions, and congestion-induced air pollution. Initial plans call for feasibility studies in each city, Construction is expected in 2021, and BRT operations to begin in 2022.