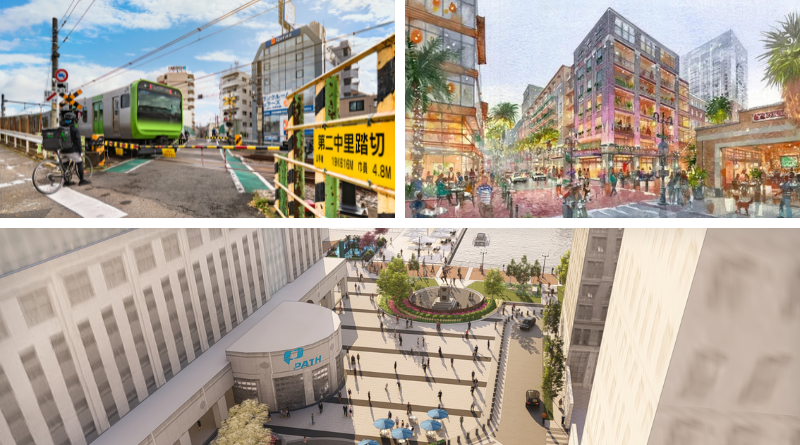 JAPAN—How Japan Won Its ‘Traffic War’
David Zipper, Bloomberg, September 6, 2022
While most of the world has seen a decline in roadway deaths over the last decade, the U.S. has experienced a 30 percent rise. Japan has been a world leader in reducing such deaths—to just 2.24 deaths per 100,000 residents or less than a fifth the U.S. rate of 12.7 per 100,000 in 2021. Factors contributing to this difference include exceptionally fast and reliable rail service, an absence of street parking, the use of small, light cars by those who do drive, and a focus on building cities that are safe for everyone, but particularly for children.

Public Transit Across the U.S. Is Not Nearly as Crowded as It Was Before the Pandemic
David Schaper, NPR, September 8, 2022
While work from home may be affecting commuting overall, traffic congestion has returned to pre-pandemic levels in many places. However, transit ridership is still down substantially. To address this, transit agencies look to better address rider needs both during and beyond commuting times.

NEW YORK—Mask Lash: Critics Urge Hochul to Keep Mandate in Transit, Slam New ‘Not Funny’ MTA PSA
Kevin Duggan, amNY, September 7, 2022
A recent decision by New York Governor Kathy Hochul to end the mask mandate for public transit has sparked debate about the risk borne by individuals with compromised immune systems and to the public at large. Prompted by widespread noncompliance by riders, and with respect to the formal end to the pandemic-era safety requirement, an MTA official cited “personal choice” as their watchword going forward. Advocates for New Yorkers with disabilities have protested the move and the tone of subway posters explaining the change, citing the continued presence of COVID-19 in New York City.

HUD Publishes FY 2023 Fair Market Rents: In New Jersey, New Calculations Increase Rental Subsidies Up to 13%
Insider NJ, September 7, 2022
The U.S. Department of Housing and Urban Development (HUD) has published its 2023 figures for Fair Market Rents (FMR) assessments, showing a national average increase of about 10 percent. As a result, housing vouchers will be adjusted to keep pace with rising private sector housing costs. Adjustments to vouchers depend on community-specific FMR rates. In New Jersey, rents have reached an all-time high. As such, FMR adjustments should particularly benefit low-income New Jersey residents in the forthcoming fiscal year.

JERSEY CITY—Work Begins on Exchange Place Pedestrian Plaza
Al Sullivan, TapInto, September 6, 2022
The Exchange Place waterfront will soon see a host of pedestrian improvements that will reorient the site and restrict car access. More than $5.5 million has been allocated to renovation to install new light poles, remove dead trees, and replace flagstones among other redesign changes that will make the waterfront more accessible and pleasant for pedestrians. Exchange Place serves as a major transportation hub with access to the PATH, NJ TRANSIT rail, light rail and bus, and to the Paulus Hook Ferry Terminal.

NEW BRUNSWICK—Detectible Surfaces and Audible Crosswalk Assistants: New Brunswick Remains Committed to Access for All
Chuck O’Donnell, TapInto, September 5, 2022
New Brunswick continues to upgrade pedestrian facilities in the city, this time with new sidewalks along Joyce Kilmer Avenue. Design and installation of the new sidewalks and crossings adhere to best practices and incorporate accessibility features such as detectable warning surfaces to aid visually impaired residents and visitors. New Brunswick has installed thousands of the red plates with physical bumps and ridges to signify curb cutouts by touch elsewhere in the city as part of its commitment to improving walkability for all

TEXAS—Mr. Biden, Tear Down This Highway
Adam Susaneck, New York Times, September 8, 2022
Reminiscent of the excesses of the urban renewal period, the Texas Department of Transportation’s (TxDOT) current highway expansion ambitions in the Houston area illustrate the nation’s ongoing need for proactive measures to reduce the presence of these roadways. Historically, highway expansion has not only increased auto-dependency and urban sprawl but also has been sited to displace minority and immigrant communities. The legacy of intracity highways continues to separate and scar these communities in ways that necessitate further federal investment in transit-oriented development and highway reductions.

NORTH CAROLINA—City Incentives for Affordable Housing Near Transit Only Led to 8 Units
Danielle Chemtob, Axios Charlotte, September 6, 2022
In 2019, the City of Charlotte adopted a policy designed to encourage the construction of affordable housing near its light rail stations. That policy allowed developers to build taller buildings and more units when they included affordable units, or they could pay into the city’s Housing Trust Fund. While the city sees the program as a success, it has drawn criticism as only eight units of affordable housing have been built, and only $1.7 million of the $6.6 million committed to date has been paid into the fund as these payments are made only when plans and permits are finalized.

CALIFORNIA—State Bill Will Eliminate Parking Requirements for Building Construction Near Public Transit
Brian White, CBS8, September 6, 2022
A measure passed by the California state legislation aims to eliminate minimum parking requirements for projects built within a half-mile of transit facilities. Parking spaces can cost between $40,000 and $100,000 per space to build and can reduce the number of units built at some locations. Three years ago, San Diego lifted its parking requirements for multifamily residential construction in Transit Priority Areas. The new legislation similarly aims to reduce construction costs for new housing and encourage the use of public transportation.

FLORIDA—Tampa’s Next Big Splash: History-Rich Gas Worx, Connecting Ybor City and More
Sue Carlton, Tampa Bay Times, September 7, 2022
The plan for Gas Worx was well-received by the Tampa City Council and others when developers presented the plan as part of their request for rezoning. The project would transform 41 acres of largely vacant land into a mixed-use, pedestrian-friendly development with 5,000 residential units. Plans call for pedestrian amenities such as tree-shaded sidewalks, multi-use trails, and a stop for a free streetcar service that would reconnect Tampa’s historic Latin quarter to other prominent new mixed-use redevelopments.

CALIFORNIA—MTD Board of Directors Approves Option Agreement with CONAM to Jointly Develop Housing
Press Release, The Santa Barbara Independent, September 6, 2022
The Santa Barbara’s Metropolitan Transit District (MTD) signed off on a joint development agreement with ConAM RE Investments to build transit-oriented, multifamily rental housing on a vacant MTD property. The proposed development will feature approximately 333 residential rental units with at least 15 percent affordable units in a location adjacent to MTD’s Line 7 route. The County of Santa Barbara and other relevant government agencies will need to review and approve the project before construction can begin.

GERMANY—Germany’s Ultra-Cheap Train Ticket Saved 1.8 Million Tons of CO2
Stefan Nicola and Josefine Fokuhl, Bloomberg, August 30, 2022
The experiment is not yet over, but the results are in…. By setting the price of a monthly public transit ticket to 9 euros ($9), Germany has prevented 1.8 million tons of CO2 as commuters opted to use transit instead of their cars. Envisioned as a means to address inflation and spikes in fuel and energy prices, the policy also had dramatic environmental impacts. More than 52 million tickets were purchased, resulting in one in ten persons choosing to substitute at least one transit trip for an auto trip each day.