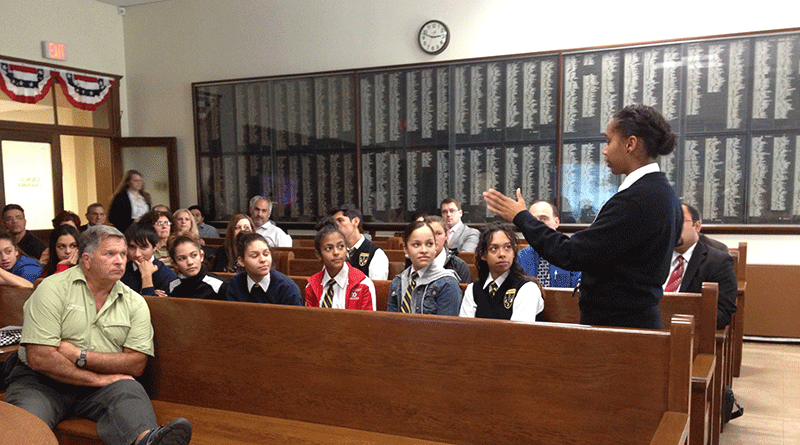 How to move from concept to goal… that is often the crucial step needed to bring community change into reality. Perth Amboy has taken its first steps on this path through its recent TOD planning efforts and is moving quickly to implement those plans. Located at the mouth of Raritan Bay, this culturally diverse city has a strong base of small and mid-sized businesses, excellent transit assets, and of course, its people. With the goal of transit-oriented redevelopment in mind, in 2013, Perth Amboy undertook a local demonstration project – an intensive public engagement and planning effort – supported by Together North Jersey (TNJ), a consortium of partners funded by the US Department of Housing and Urban Development. The resulting report, the Perth Amboy Bay City Transit District Strategy, focuses on ways to provide established residents with enhanced housing choices and community amenities near the train station while attracting new residents, businesses, and investment.

Making the most of its transit facilities lies at the heart of the community’s plans. Located on NJ TRANSIT’s North Jersey Coast Line, the Perth Amboy Station provides passengers a 30 minute ride to Newark or a 50 minute ride to New York Penn Station aboard one of 64 weekday trains. Nearly 900 riders board at Perth Amboy each day, though with the reorientation through development outlined in the Transit District Strategy daily ridership could increase that number to more than 1,700. Perth Amboy also has robust NJ TRANSIT bus connections to destinations such as New York City, Woodbridge, and New Brunswick. It is an important regional hub with potential to capitalize on these transit services.

Administered by TNJ partner NJ TRANSIT, the local demonstration project (LDP) program provided Perth Amboy with technical assistance by way of the architecture and planning firm EE&K. EE&K worked with four local partners – the City of Perth Amboy, the Middlesex County Planning Department, the Jewish Renaissance Foundation, and the Middlesex County Improvement Authority – to develop a plan for a Transit District that promotes TOD within a half-mile of Perth Amboy’s train station.
From the beginning, community-based planning was key to the success of the LDP. Throughout the fall of 2013 Perth Amboy residents and area stakeholders participated in public engagement events where they learned how the project intersected with other planning projects within the city and voted on which issues and opportunities they felt were most important. Notably, every meeting included interpreters so that those with limited English language could have their voices heard. All flyers and other public notices were translated into Spanish, the most prominent language spoken in Perth Amboy other than English.

“The city held a number of public and stakeholder meetings during its Together North Jersey LDP process to not only explain the proposed TOD plans, but also to get feedback and support from the local business and residential community,” said Perth Amboy’s senior planner, Annie Hindenlang.

About 80 people representing nearly every neighborhood in the city attended a large event hosted by the project partners at the community center. Additionally, 20 representatives from Perth Amboy’s business, school, and religious groups attended each of the two stakeholder meetings. Students from a local charter school also offered their perspectives at one of the stakeholder meetings. The project partners presented the results of the effort to the City Council at the November meeting, which was televised on the local access channels. Input and support from residents and stakeholders proved to be important to the study’s success and will continue to be so as this work moves into the implementation stage.

The Transit District strategy calls for three anchors: the Station Area Core (the primary focus of the study), the Transit District Downtown Focus Area, and the Waterfront District, which together create a corridor encompassing the city’s principal commercial and residential area between the station and the Arthur Kill waterfront (see map above). Developing three separate but integrated anchor areas will allow Perth Amboy to pursue its TOD goals in smaller, more manageable pieces while acknowledging the distinct development needs and characteristics of each area. Zoning in the Station Area Core will support the densest development and the greatest mix of uses – commercial, residential, civic, etc. A transition to less dense development will occur as one moves from the station to the Transit District Downtown Focus Area and then to the Waterfront District. Recommendations for the Transit District include:

The concept of these anchors helped the city develop its planning and implementation agenda, establish next steps, and determine which specific programs, improvements, and activities are associated with each priority. First is the adoption of new Transit District zoning. As Perth Amboy moves into the implementation phase, the city will use this agenda to track project results, delegate tasks among stakeholders, and specify steps that still need to be completed.

In December 2013 Perth Amboy demonstrated its commitment to this effort by passing a Complete Streets policy that requires changes to municipal-owned right-of-ways that accommodate all road users and make the streets safer for pedestrians and bicyclists. Future steps include the adoption of a TOD plan and/or zoning ordinance; creation of a map of the TOD areas; development of transit-supportive architectural and site design guidelines; and application to the Transit Village Initiative.

The project team spent the time necessary to understand what Perth Amboy residents want and what the city can support and thus has been able to break down overarching goals into attainable next steps that will enable Perth Amboy to pursue sustainable, livable, transit-oriented development. The project is a prime example of the process a municipality can pursue to achieve TOD.

What is Together North Jersey? In November 2011, the US Department of Housing and Urban Development (HUD) awarded Together North Jersey a $5 million Sustainable Communities Regional Planning grant. The grant is matched with an additional $5 million in leveraged funds from project partners. Together North Jersey is a voluntary partnership of counties, cities, towns, non-profits, and educational institutions that have agreed to work together to develop a regional plan of action (a.k.a. Regional Plan for Sustainable Development, or RPSD) that reflects HUD’s sustainability and livability principles for 13 northern New Jersey counties: Bergen, Essex, Hudson, Hunterdon, Middlesex, Morris, Monmouth, Ocean, Passaic, Somerset, Sussex, Union, and Warren. The RPSD is intended to strengthen northern New Jersey’s economy; improve transportation connections and choices; and improve access for all residents to good jobs, safe and stable neighborhoods, a healthy environment, quality schools, fresh food, and civic and cultural resources. The central framework for developing the plan will be sustainability, transit connectivity, and transit-oriented development. The RPSD will be completed by January 15, 2015.
Local Demonstration Projects provide technical assistance for planning studies anchored by established or anticipated public transit service and/or facilities. These on-the-ground projects demonstrate the process of achieving sustainable, livable TOD and help local communities accomplish this goal. Visit the LDP page to learn about the other LDP projects.