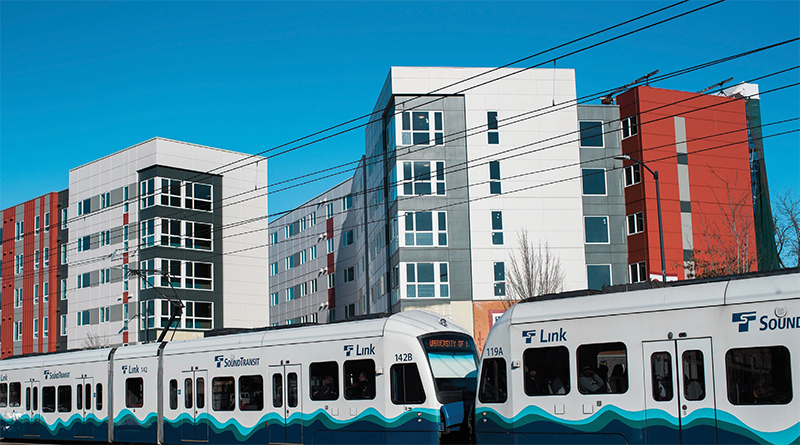 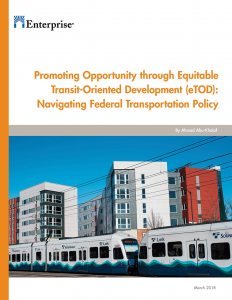 Navigating Federal Transportation Policy by Ahmad Abu-Khalaf, published in March 2018, is the third report in Enterprise Community Partners’ series on Promoting Opportunity through Equitable Transit-Oriented Development (eTOD). This report provides an overview of federal funding opportunities available for eTOD projects, specifically focused on financing affordable housing. The report briefly reviews how federal policies incentivized suburban living and thus disincentivized eTOD over the course of the 20th century and discusses how policies have changed in the past few decades to promote both transit-oriented development and affordable housing. The report presents three ways that public agencies, developers, and all stakeholders can leverage federal transportation policy to create eTOD environments: 1) prioritization and planning, 2) funding, and 3) utilizing publicly owned parcels.

Much of the work done around eTOD today is meant to counter the effects of racist and segregationist policies of the mid-20th century that aimed to suburbanize the American population and, as a result, blighted poor, urban areas. As a result, these locations have experienced decades of disinvestment that eTOD works to reverse as more Americans look to live in urban, transit-accessible areas. US Department of Housing and Urban Development (HUD) programs such as Community Challenge Planning Grants and the Affirmatively Furthering Fair Housing Rule, promote the inclusion of affordable housing development in transit-accessible neighborhoods. Low-Income Housing Tax Credits are distributed via scores on Qualified Allocation Plans (QAPs) developed by state housing authorities. Many states now give standalone points in their QAPs to housing developments near transit. Additionally, the Federal Transit Administration uses its Capital Investment Grant and Pilot Planning Grant programs to support smart growth projects around transit. The report states that by coordinating FTA, HUD, and other federal funding sources, development around transit can create a well-rounded, equitable community that provides transit access to all, regardless of race or income level.

The first leverage point the report addresses in utilizing funding for eTOD projects is sufficient Prioritization and Planning. In order to receive federal funds, states and regional Metropolitan Planning Organizations (MPOs) must follow a federally mandated planning process, with continuing, comprehensive, and cooperative (3-C) transportation plans and improvement programs. However, outside of this 3-C requirement, states and MPOs have discretion in how and where to use their funds, including for standard road improvement work. Thus, in order to conduct successful eTOD projects, planners must specifically focus on small-scale Complete Streets projects, multi-modal transportation development, and projects that will capitalize on the most heavily used forms of transit, particularly bus rapid transit (BRT) and express bus lines.

While there is no federal mandate that requires community development in the planning process, many MPOs conduct public outreach and data analysis related to housing needs and involve housing and community stakeholders in the transportation planning process. The Metropolitan Transportation Commission for the nine counties in the San Francisco Bay Area established the CASA committee to facilitate affordable housing preservation and production and counter displacement in the area. In January 2019, the committee released legislative, financial, policy, and regulatory recommendations to be utilized in conjunction with transportation planning efforts. The Washington State Puget Sound Regional Council is using a data-driven approach to evaluate proposed transportation projects, based on improving the health of the community and facilitating improved transit access for transit-dependent populations.

The second leverage point for eTOD projects is obtaining the proper funding to finance transportation infrastructure. Without effective transit, TOD has no foundation. Historically, federal funds have prioritized highway projects over transit. Even today, transit projects have around a 50 percent federal share matched by 50 percent state and local funds, compared to a typical 80/20 split for highway projects.

Several changes to the federal transportation financing buckets have shifted the focus towards TOD projects, although many of these programs still require “states and local governments [to] provide substantial funding to public transportation projects and operations” to meet federal matching requirements (16). The Fixing America’s Surface Transportation (FAST) Act, passed in 2015, expanded the Transportation Infrastructure Financing and Innovation Act (TIFIA) program to provide credit assistance for large (greater than $10 million) TOD infrastructure projects such as intercity bus stations and passenger rail stations. Additionally, the FAST Act expanded the Railroad Rehabilitation and Improvement Financing (RRIF) program to provide direct loans and loan guarantees to commercial and residential developments that are located near rail stations or functionally support the stations.

In 2011, the FTA established the aforementioned TOD Pilot Planning Program to finance planning of development along transit corridors that supports ridership. Transportation agency applicants can utilize the funding to coordinate with the housing and land use sector to develop economic development and housing plans in conjunction with transit plans.

The biggest change has been to the Major Capital Investment Projects program (New Starts), which provides Capital Investment Grants to infrastructure projects. The FTA revised the rating system in 2013 and again in 2015 to encompass more eTOD-friendly factors, including affordable housing and coordination with local policymakers and housing stakeholders. Most factors were revised to score higher if the project positively serves existing low-income and transit-dependent populations. New Starts ratings consist of Project Justification and Local Financial Commitment scores. Project Justification scores are based on six equally weighted factors: Land Use, Cost Effectiveness, Mobility Improvements, Congestion Relief, Environmental Benefits, and Economic Development.

The third and final leverage point the report addresses for facilitating eTOD projects is making parcels owned by public agencies around transit facilities available for affordable and mixed-income housing development. Many transit agencies hold a portfolio of assets that can be used to develop TOD, including vacant land that was once used for construction staging, underutilized park-and-ride lots, and the air rights above stations and tracks. These areas may be restricted for development by a number of factors, including zoning restrictions, site characteristics, and the availability of infrastructure to support development, such as utility connections. Any property originally purchased with FTA funds has extra regulatory requirements in addition to state and local rules regarding the sale or lease of publicly owned property. However, if these inherent and regulatory barriers can be overcome, publicly owned sites can “expand opportunities for affordability in an environment in which mission-driven developers struggle to compete for sites against better-funded market-rate developers” (18).

The report offers a number of recommendations to facilitate development on publicly owned parcels. The solicitation process for site acquisition should be streamlined, utilize community outreach and engagement, and balance agency goals and community benefits with efficient real estate development practices. If an eTOD project is undergoing the Joint Development process, FTA and DOT funds can be used to acquire new sites to support the development, such as a mixed-use complex that will increase ridership numbers on the transit network.

If the public agency seeks to completely dispose of its interest in the site, and the site is surplus (not supporting ongoing transportation purposes) it can utilize several methods to sell or lease the property. Simple, standard property disposition methods of sites under FTA restrictions usually require the receipt of the Fair Market Value for the property, which can make it more difficult to conduct eTOD projects in areas with a valuable real estate market. In order to facilitate eTOD projects, the agency can retain the title with buyout. The agency pays the FTA out of its own assets (essentially buying the FTA out of the property), eliminating any federal restrictions on purchase price, and the agency is then able to negotiate discounted rates or other agreements that would allow for eTOD and affordable housing. A less straightforward option is to transfer the land asset to a local government authority. This option requires that “the overall benefit accruing to the government through the transfer must be greater than the federal interest,” and thus is competitive (21). However, if approved by the FTA, it allows the receiving agency to develop on the property without reimbursing the FTA.

Federal policy has evolved over the decades to become generally more supportive of eTOD. In order for a local or transit agency to properly facilitate affordable housing and other eTOD projects, it must have a full understanding of the federal benefits and restrictions across different sectors, but especially as they relate to utilizing FTA and DOT funding. Local and state funds are also necessary to meet the matching requirements for federal funding of capital projects, and thus make up a key piece of the funding pie. Prioritization and planning, obtaining proper funding, and utilizing publicly owned parcels, combined with cross-sector cooperation and balanced transportation policies that incentivize transit projects rather than highway projects, are all essential factors to ensuring successful eTOD.