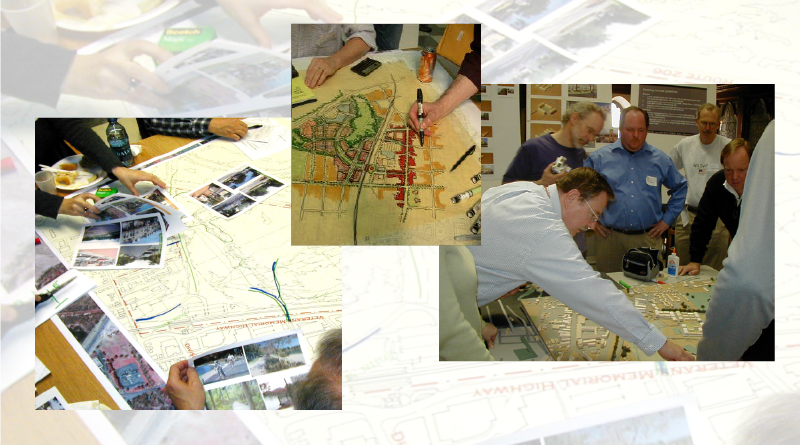 The State of New Jersey makes available to municipalities, redevelopment agencies, planners and developers a host of technical assistance resources and financial incentives to promote transit-oriented development projects. Following is a sampling of programs designed to support TOD in New Jersey: 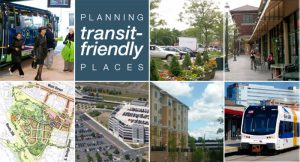 1. NJ TRANSIT, the sponsor of the Transit-Friendly Development Newsletter, provides planning assistance to municipalities through its Transit-Friendly Planning Program scroll down to Transit-Friendly Land Use). The program has in the past assisted communities in planning for transit supportive land use and transit-oriented development at and around its passenger transit facilities by providing on-call consultants with expertise in transportation planning, urban design, market analysis, economic development, downtown revitalization and community outreach. The program’s work has resulted in several consensus-based, transit-supportive land use “vision plans” used by communities to guide development and redevelopment at and near transit facilities. The program will be launching its next phase in the coming months, and will be the subject of a future article.

2. The Transit Village Initiative is a multi-agency Smart Growth partnership coordinated by the New Jersey Department of Transportation (NJDOT), which helps municipalities better utilize their transit assets and redevelop near stations and bus hubs with new housing, retail and commercial space while minimizing traffic and improving pedestrian and bicycle access. To be considered for designation, a municipality must have adopted the land use entitlements necessary to advance transit-oriented development and demonstrated its commitment to redeveloping the half-mile area around the transit facility into compact, mixed-use neighborhoods with a strong residential component.Designation enables municipalities to deal directly with multiple state agencies through the Transit Village Task Force including the New Jersey State Council on the Arts, the New Jersey Department of Environmental Protection, and the New Jersey Housing and Mortgage Finance Agency. In addition, designated municipalities qualify for priority funding and technical assistance from some state agencies, as well as for NJDOT grants. Since the program’s inception in 1999 the state has designated 20 Transit Villages.

3. The NJDOT has also recently developed its Mobility and Community Form (MCF) program for municipalities to better coordinate transportation and land use. The MCF is intended to help municipalities coordinate local transportation with community facilities, buildings, and open space and to promote land use patterns that support transit, improve pedestrian and bicycle access, and foster a sustainable environment. The MCF element allows municipalities to combine circulation and land use elements in local master plans. Transit stops are part of one of seven “building blocks” to be incorporated within the MCF element, along with parking, circulation, shopping streets, neighborhoods, public places, and the natural environment. 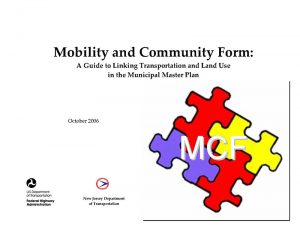 NJDOT has created two useful tools: the MCF guide and the Patterns Folio to help communities achieve their planning goals.NJDOT has partnered with the Municipal Land Use Center (MLUC; now known as the Sustainability Institute at The College of New Jersey) at The College of New Jersey to advance the MCF program by working with a group of pilot communities. MLUC, together with municipal representatives and outside consultants, has formed project teams for each community. Of the first five pilot communities, Dover in Morris County (on the NJ TRANSIT Morristown and Montclair-Boonton lines) and Hammonton in Atlantic County (on the NJ TRANSIT Atlantic City Line) have incorporated TOD components as part of their plans; the other three pilot communities, Edison in Middlesex County, Mt. Arlington in Morris County and Mt. Holly in Burlington County, have focused on “main street” districts located along state highways. This winter, Upper Township in Cape May County and Montclair Township in Essex County were chosen to participate in the second round of the pilot program.

4. Since 1989 Main Street New Jersey (MSNJ), part of the New Jersey Department of Community Affairs (DCA), has encouraged and supported the revitalization of downtowns and neighborhood commercial districts through a comprehensive program that promotes locally-based economic sustainability of traditional historic business districts. In 2010, the MSNJ program will be celebrating its 20th Anniversary as the official nationally-recognized “Main Street” coordinating entity for the State of New Jersey.The program takes an asset based stakeholder-driven approach and provides the technical support and training that communities need to restore and enhance their “Main Streets” as centers of activity and commerce. About every two years, the DCA selects communities for admission to the program through a competitive process.

In the fall of 2009, MSNJ modified its program to allow communities to apply for one of four tiers of commitment and service, each designed to meet the needs of communities.Communities can now be designated for either Traditional or Partner status, or apply for Affiliate or Aspiring status. Traditional designation provides a full range of MSNJ services to those communities that have made the highest level of commitment and have a fully functioning and staffed Main StreetTM organization. Partner designation is reserved for those communities working toward this level of commitment and requires at least the employment of part-time staff within 3 months of designation. For those communities exploring the possibility of future designation, the Affiliate Tier provides assistance in building a suitable organizational and funding base for their downtown revitalization program. For communities beginning their downtown revitalization effort, the Aspiring Tier provides a range of services and assistance, principally access to training by state and national downtown development experts.MSNJ also runs the DCA’s Downtown Revitalization and Management Institute, providing training in utilizing the Main Street Approach to grow the economic, civic, physical and social value of a community’s core. These sessions in Trenton are open to any community in New Jersey although MSNJ communities receive scholarships to attend.

5. Cited by the governor’s “transition team” as a program that might warrant fine tuning is the Urban Transit Hub Tax Credit (UTHTC) program. The UTHTC, administered by the New Jersey Economic Development Authority (EDA), provides tax credits for capital investments near transit. Qualifying locations are located within ½ mile of NJ TRANSIT, PATH, PATCO, or light rail stations in Camden (up to 1 mile), East Orange, Elizabeth, Hoboken, Jersey City, Newark, New Brunswick, Paterson, and Trenton.In 2009 UTHTC program eligibility was expanded and qualifications clarified such that the program now extends tax credits of up to 100 percent of the value of qualified capital investments made within an eight-year period. Property owners apply 10 percent of the total credit every year for 10 years against their corporate business tax, insurance premiums tax, or gross income tax liability. Through the tax credit certificate transfer program, recipients have the option to sell tax credits held for at least one year for at least 75 percent of the transferred amount. Businesses need to apply for the tax credits within five years of the program’s January 13, 2008 effective date; they then have eight years to satisfy the capital investment and employment conditions. To date projects in Newark, Trenton, and New Brunswick have been approved to utilize the tax credits. These projects include:

6. Enacted in 2009 and also cited for “fine tuning” by the governor’s “transition’s team’s,” the Economic Redevelopment and Growth (ERG) Grant Program, facilitates TOD financing by allowing developers to use tax increment financing to cover costs they could not cover through conventional sources. Currently, the ERG program authorizes the EDA, in consultation with the State Department of the Treasury, to negotiate redevelopment incentive grant agreements with developers for qualifying projects located in an “economic redevelopment and growth grant incentive area,” designated by municipal ordinance. Up to 75 percent of the incremental increase in state and local tax revenues attributable to businesses within the redevelopment project can be paid to the developer. Transit Villages were specifically designated within the statute as a “qualifying economic redevelopment and growth grant incentive area,” in addition to Planning Areas 1 (Metropolitan) and 2 (Suburban) as designated under the State Development and Redevelopment Plan.

7. The EDA also offers low-cost and bridge financing for municipalities, developers, businesses, and community groups to revitalize urban areas. As part of its larger mission, EDA offers financial assistance for: