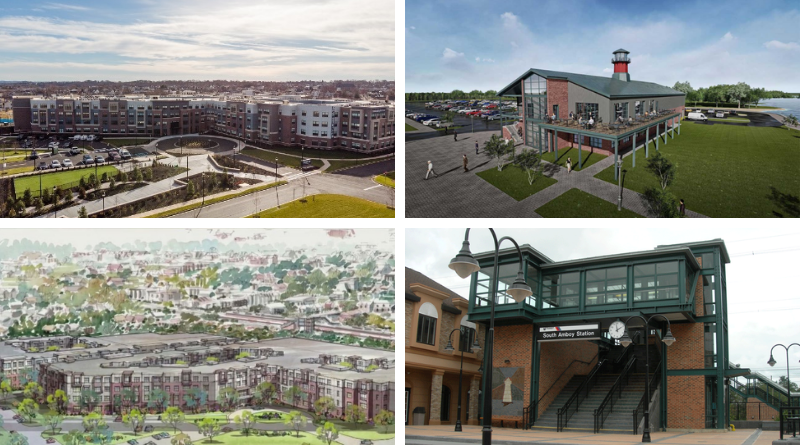 A two-phase redevelopment of the station began in 2004 and was completed in 2010, adding ADA compliant platforms and a pedestrian overpass. These improvements helped to significantly increase accessibility in and around the station.

With the Transit Village designation, South Amboy is eligible for certain funds from the NJDOT such as the $130,000 grant the agency awarded the City in early 2021 for station pedestrian safety enhancements, including lighting improvements and the purchase of three new LED signs that will provide up-to-date travel information to transit passengers.

South Amboy is a small municipality, only 1.5 square miles in total, according to Glenn Skarzynski, the City’s Business Administrator. As such, the City looks to make use of its connectivity and vacant land to grow. One transit-oriented development (TOD), Woodmont Cove, added 106 townhomes and 20 apartment units to South Amboy when it was completed in 2018. Another TOD, the Manhattan Beach Club, is currently under construction, and will add 1,875 housing units to the City’s housing stock over the next 30 years.

The Beach Club is a redevelopment of a 55-acre parcel abutting the waterfront, on a former brownfield site. With the Beach Club development, the South Amboy Redevelopment Agency (SARA) has said that South Amboy would gain over $19 million in long-term benefits, as well as cash from the sale of the property and payments from unit rentals and purchases. The developer would also be obligated to provide public waterfront space, 88 units of affordable housing, and contribute $3.4 million to an affordable housing trust fund.

Other developers are demonstrating renewed interest in the area. In September 2021, the South Amboy Planning Board approved an application for the Cove at Manhattan Beach, a 499-unit development consisting of three multifamily structures adjacent to the waterfront. What is currently a brownfield site will be remediated and developed, with public walkways, and a publicly accessible beach. This TOD activity could be the advent of a new chapter in the small bayfront city’s development.

The City understands how its transit assets and transit-friendly planning help to develop in sustainable ways. “Based on the fact that we’ve got good bones for mass transit with rail,” said Skarzynski, “That we’re very close to breaking ground on our passenger ferry [terminal], coupled with the judicious use of PILOT programs, we’ve been able to attract high quality developers who are coming in, making the investment to environmentally remediate them, and building phenomenal ratables that are going to benefit the tax payers for decades.”

The proposed ferry terminal will be near the Beach Club, and will shuttle commuters from South Amboy to Lower Manhattan. To fund the terminal, South Amboy has received $5.3 million in a grant from the U.S. Department of Transportation, as well as a $10 million loan from the Federal agency. In order to provide safe connectivity between South Amboy’s NJ TRANSIT station and the ferry terminal, the North Jersey Transportation Planning Authority (NJTPA), the area’s metropolitan planning organization (MPO) has allocated $1 million for new pedestrian-cyclist infrastructure. This funding comes through the Transportation Alternatives Set-Aside grant program, a partnership between NJDOT and the state’s MPOs. This corridor will also add to the City’s waterfront walkway where the City plans to construct an additional 1.5 miles of interconnected pedestrian-cyclist links connecting the rail station, ferry terminal, the downtown and the waterfront.

The City is also working with leadership of nearby municipalities to create alternative transportation options to the terminal, such as water taxis that might connect nearby Perth Amboy commuters with the ferry. “You have to have that spirit of cooperation, because at the end of the day, no matter who’s at a particular local government, it’s all for the benefit of the constituents they represent” Skarzynski said. The City is currently waiting for an EPA air quality report to conclude before it can break ground on the ferry terminal.

These transit connections, such as the unique proximity between a train station and ferry, in conjunction with municipally-led redevelopment efforts, demonstrate a potential for change that is in the spirit of the Transit Village Initiative. Transit-oriented development allows for more efficient real estate use, which is crucial for such a small city. “At the end of the day, our transit village designation is a big feather in our cap,” Skarzynski said. “We want to be the poster child for transit villages.”