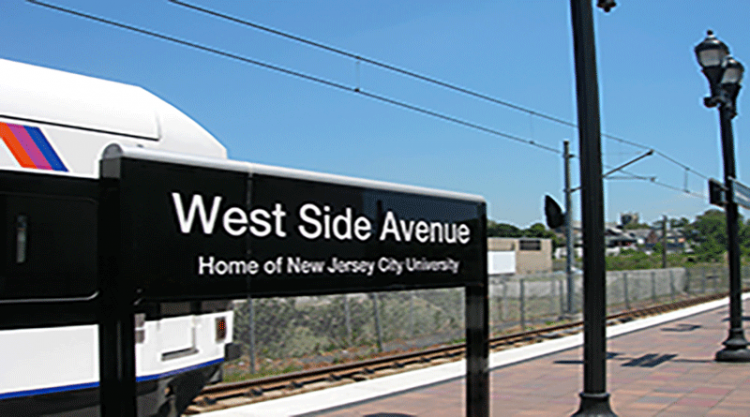 The Hudson-Bergen Light Rail line (HBLR) has not only stimulated development along the Hudson River waterfront where tony high-rise condominiums and rental apartments offer million dollar views of Manhattan, it has also given the more modest neighborhoods along its western spur (Liberty State Park to West Side Avenue) a valuable amenity as well.

Three blocks from the West Side Avenue Station, new townhomes and lofts are being built by Centex Homes, a national builder based in Dallas. CityHomes at Westside Station is one of their many projects in redeveloping areas. Centex representatives are emphatic that the presence of the light rail station and the transportation options are what draw buyers to this location.

The site is slated to contain 120 homes – 88 lofts in two buildings and 32 stacked townhomes and studios (studios over towns). Construction is well under way and several of the stacked townhouse buildings are sold out. Base prices range between $300,000 to $470,000; one-, two- and three- bedroom units offered in a variety of floor plans.

The Centex development is an early step toward the larger goals for Jersey City’s West Side: the Bayside Redevelopment Vision Plan that encompasses 75 acres between Communipaw, Bergen and Stevens Avenues and Newark Bay. A key player is the New Jersey City University (NJCU) which is located proximate to the West Side Avenue Station.

NJCU, in conjunction with the Jersey City Board of Education, is developing 21 acres that it owns within the Bayside Redevelopment area. This expansion, known as West Campus, will include retail space, housing, academic teaching spaces, academic office spaces, and primary and secondary schools. The buildings will be organized on a new street grid, clearly defined by the building facades, with ample pedestrian-friendly sidewalks connecting a variety of public spaces. Currently, the site is being cleaned up and cleared of old industrial buildings. The West Campus is within walking distance of the West Side Avenue LRT station.

First Residences Completed at The Peninsula at Bayonne Harbor

September 21, 2009 Steph_Admin Comments Off on First Residences Completed at The Peninsula at Bayonne Harbor