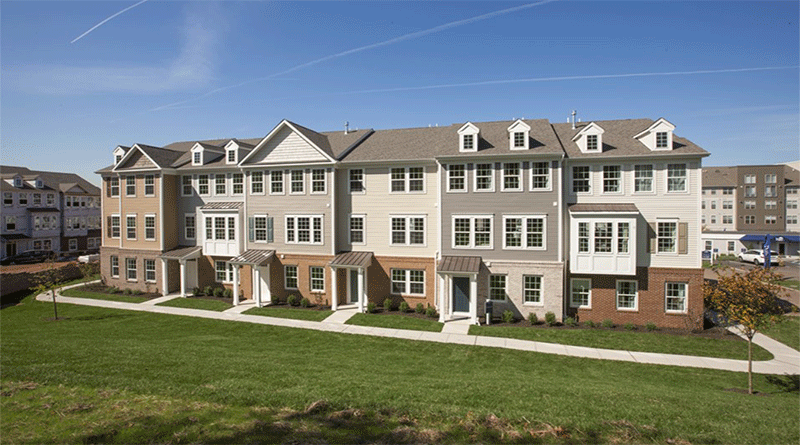 Hard work on Wesmont Station in Wood-Ridge, the redevelopment of a 144-acre old industrial site, is finally paying off. When completed, Wesmont Station – name to both the project and the new NJ TRANSIT commuter rail station – will encompass residential, commercial, and recreational uses as well as provide a new transit connection to New York City. The first residential buildings of the project have been completed and groundbreaking for the station was held in March 2014.

The planning for the site’s eventual redevelopment and the creation of a new rail station has involved many partners including the borough of Wood-Ridge, Somerset Development – the master redeveloper of the site – and NJ TRANSIT. Initially envisioned more than ten years ago, this redevelopment effort is reclaiming land that once housed a Curtiss-Wright aircraft assembly plant, the grounds of which represent about one-third of the Bergen County borough. The residences are expected to support ridership for the station, accessible via a five-minute or shorter walk. Located on the NJ TRANSIT Bergen Line, the Wesmont station will be the borough’s second rail station. Its other station, Wood-Ridge Station, is located on NJ TRANSIT’s Pascack Valley Line. The ride from Wesmont Station to New York Penn Station will take about a half-hour; passengers will need to change trains at Secaucus Junction.

The drawn-out planning window reflects in part the need for a $15 million environmental clean-up to remove traces of petroleum and chemical products that were once stored there and to treat contaminated groundwater. Because of the extent of the pollution, the redevelopment site does not include land where groundwater contamination is located under the old factory.

Despite these complications, Wood-Ridge, Somerset Development, and NJ TRANSIT have remained committed to the successful transit-oriented development of the site, the last remaining empty parcel of land in the borough. Their collaboration exemplifies a public-private partnership that is bringing TOD to fruition while providing significant benefits to those involved. Wood-Ridge, for example, will reap significant tax benefits as the residential and commercial units are occupied.

Chris Eilert, the Borough Administrator is optimistic about the success of Wesmont. “When the project is fully built, we’re expecting in the neighborhood of $3-4 million a year [in taxes] for the borough,” helping to provide long-term tax stability.

Somerset Development was attracted to Wood-Ridge’s proximity to New York City, as well as its retail and amenities, and felt there was a demand for luxury rentals below New York’s prices. The residences are marketed to young couples and empty-nesters, emphasizing the location’s convenient access to New York City via NJ TRANSIT.

When completed, the entire redevelopment project will be home to about 1,200 new residential units, including over 100 affordable rental units, and 125,000 square feet of commercial space. The project is being built in phases by a number of developers, including AvalonBay Communities, the Pulte Group, and the Ingerman Group. First to be completed, Avalon Wesmont Station opened in summer 2012. This apartment and retail complex, built by AvalonBay, features 406 studio, one-, two- and three-bedroom apartments, including affordable housing units, as well as 13,000 square feet of ground floor commercial space. In February 2014, Milk and Honey, a small organic grocery chain, opened a 6,500 square foot store and café. AvalonBay is currently in the process of acquiring tenants for the remaining 6,500 square-feet. In 2013, Pulte began construction on another residential project, Liberty Square at Wesmont Station, scheduled to open in summer 2014. The project will consist of 217 for-sale town homes. Ingerman Group, an affordable housing developer, will also build 104 units of low- and moderate-income housing; its final site plan was approved in January 2014. Wesmont will eventually also contain a public square, a community center, and walking/bicycling paths, providing residents pedestrian access to the train station and community and retail amenities.

It’s a long time coming,” said borough engineer Brian Intindola. “Now it seems that with Avalon Bay, Pulte, Ingerman – all those three components are coming together.”

Though planning, clean-up, and construction can often take many years, the process can produce admirable results. Wesmont Station may indeed have been a long time coming. But it’s well worth the effort: when the entire Wesmont Station project is completed, it will give new life to this industrial corner of Wood-Ridge, bringing to the community a host of residential, job, and recreational opportunities. The project represents the potential of transit-oriented development to help a community thrive economically and improve the quality of life of its residents and visitors.