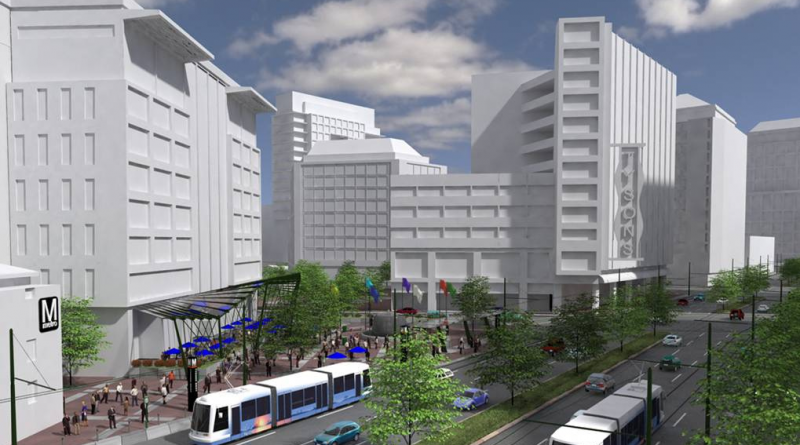 An archetypal “edge city” suburb where people shop and work, but do not live, Tysons Corner, Virginia, has embarked on an effort to retrofit its sprawling landscape into a more dense, urban environment that could serve as a model for similar locations around the nation. A suburb of Washington, DC, Tysons Corner is home to only 17,000 residents, but hosts the largest retail area on the East Coast south of New York City, with more than 3,400 hotel rooms, 100,000 jobs, and 25 million square feet of office space.
Technically an unincorporated area within Virginia’s Fairfax County, the area is now marked by a sprawling ocean of parking lots, office parks and shopping malls. Last fall, Fairfax County supervisors unanimously approved a vision plan, known as Transforming Tysons, to encourage land owners to build higher, denser, more transit-oriented and more walkable neighborhoods. The impetus for the vision plan was the upcoming construction of four new Metro stations as part of the Dulles Corridor Metrorail project. These new stations will connect the area with Metro’s Orange Line at East Falls Church, providing high-quality access to downtown Washington.

The vision and area-wide recommendations plan, the result of nearly three and a half years of public discussion and consensus-building, was created by the Tysons Land Use Task Force. The task force was formed in 2004 by the Fairfax Board of Supervisors to evaluate the area’s transportation system and land use and to look at the area’s potential for redevelopment. The 36-member task force includes representatives from community groups, nonprofits, businesses, neighborhood representatives, developers, and organizations for the environment, arts, housing and transportation. After the vision plan was approved last fall, it was referred to the county planning commission for the development of a detailed comprehensive plan and specific language for the county zoning ordinance. It is expected that full implementation of the plan will take several decades.

The vision plan recognizes that the four highways traversing the community are likely to remain vital arteries for access to the area, but recommends creating eight distinct neighborhoods in Tysons Corner. These smaller-scale districts are planned to have the look and feel of urban neighborhoods. A key piece of the vision plan is its recommendation to allow developers to build at the highest density within a walkable, one-eighth mile radius of the new Metro stations. According to the plan, this density is essential if Tysons Corner is to continue to thrive as a jobs center and to avoid worsening the area’s already-debilitating traffic congestion. The plan also calls for giving landowners broad new rights to build at much higher densities and height, constructing narrower streets in a grid pattern, adding sidewalks, and establishing restaurants and shops at sidewalk level.

County supervisors hope that the plan will improve both the region’s economy and its environment. According to the task force’s report, if Tysons is redeveloped as proposed, real estate and sales tax receipts collected locally could more than triple. They also expect the town’s residential population to grow significantly, from 17,000 today to as many as 100,000—bringing new residents who would support local shopping, nightlife, and other activities that would stimulate the economy.
The plan’s recommendations include:

How to pay for the grand plans outlined in the vision remains a question. To fund new infrastructure, the task force is looking at special taxing districts or a development authority with borrowing power. The plan relies on developers to contribute to the new infrastructure and amenities, and urges Fairfax County to explore public funding mechanisms that could assist developers without placing additional property tax burdens upon residents. It is also hoped that by allowing developers to build at very high density—without suburban requirements such as parking and set-back requirements—the county will be able to exact fees in return for having offset infrastructure costs.