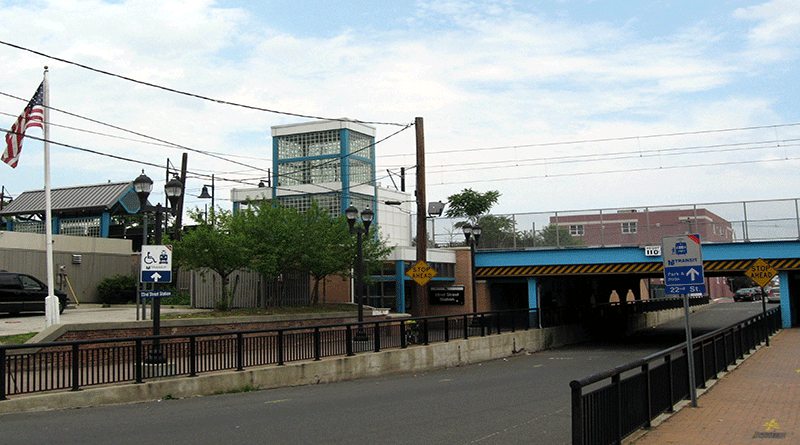 The city of Bayonne has added its Hudson-Bergen Light Rail Line station at 22nd Street to its transit-oriented planning efforts. Earlier planning had focused on the city’s two more northern stations at 34th and 45th streets as part of the Marine Ocean Terminal Bayonne (MOTBY) redevelopment. The 22nd Street station now marks the southern terminus for the HBLR system; in late April, NJ TRANSIT authorized work to begin on a one-mile extension to 8th Street Station, which will become the line’s next southern terminus.

Ridership at the station has grown steadily since its opening, rising to 1,884 average weekday boardings in December 2007. Commuters can park in one of 159 spaces at a surface lot about 1½ blocks away; ADA spaces are available closer to the station.

Reconceptualizing the 22nd Street station area began in 2000, before the station opened in November 2003. As part of NJ TRANSIT’s federally funded Transit-Friendly Communities project, Bayonne, working with NJ TRANSIT, the Regional Plan Association and the Project for Public Spaces, examined the development potential at all of its light rail stations. As a consequence, in 2002 the city, under the leadership of former mayor (and now NJ Commissioner of Community Affairs) Joseph V. Doria, Jr., amended its master plan and zoning such that the area was rezoned as a Transit Development Overlay (TDO) district.

In 2004-2005, the city conducted a study of the area that led it to designate a core area surrounding the 22nd Street station in need of redevelopment. The redevelopment area encompasses an entire city block (see map) and contains a mix of 41 commercial, residential and public properties, including vacant lots, Bayonne Parking Authority surface lots, a senior citizen complex, and a fuel oil company/truck storage yard. The 6.72-acre redevelopment area is located in the city’s downtown. Broadway, the city’s main shopping street, lies one long block to the west of the 22nd Street station.

This past fall, the city issued a request for qualifications/statement of intent (RFQ/SOI) for the 22nd Street station area, called the Broadway Corridor Plan. The RFQ/SOI specified that proposals should be developed in accordance with transit-oriented development and Smart Growth principles. Specifically, the RFQ/SOI called out the need to reestablish a fine-grained street pattern in the station area. A strong grid of streets exists in the city; however, some historic streets and alleys have been lost, creating overly large blocks in the vicinity of the station. The issuance requested that future development reestablish some of this infrastructure and impose the street grid in locations where block sizes are too large.

On April 30, the Bayonne City Council named Bayonne Developers Associates, a joint venture of KOR and Time Equities, as the conditional redeveloper for the Broadway Corridor Redevelopment Project, pending the completion of the redevelopment agreement. KOR and Time Equities have worked on other projects near the HBLR line, including the Montgomery-Greene building in Jersey City, a mixed-use residential over retail building with a parking garage completed in 2006. The Broadway Corridor redevelopment plan and agreement should be completed by the end of this year.

Eventually, redevelopment near the station may encompass as many as 1,000 housing units and between 75,000 and 100,000 square feet of commercial space. Plans also call for a park and/or plaza to be built near the station. Shared parking will be provided by at least one parking structure. The entire redevelopment process is expected to proceed over the next 10 years.