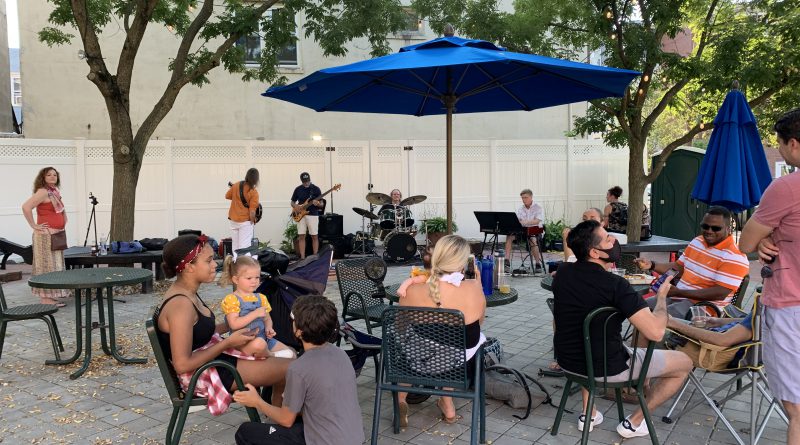 In March 2020, downtown Rahway looked like many town and city centers across New Jersey. The streets were empty and stores closed. Business owners wondered how long their operations would survive as COVID-19 cases surged across the state. After two decades of successful arts- and culture-based, transit-oriented redevelopment, the downtown faced an uncertain future.

Months later, COVID-19 remains a threat and the future is still uncertain, but the downtown has once again sprung to life. In some ways it’s busier than usual.

Amy Garcia Phillips, co-Managing Director of the Rahway Arts+Business Partnership (the RA+BP), says community solidarity, a concerted response to COVID-19, and a good deal of creativity allowed Rahway to find opportunities in the crisis.

The RA+BP was established in 2009, as the Rahway Arts District, to promote and support businesses and foster arts and culture-driven economic development in a designated, downtown Special Improvement District (SID). Commercial properties in SIDs pay a special tax assessment, with revenue used to fund improvements and management of the district. Earlier this year, just before COVID-19 hit, the municipality expanded the SID to include additional commercial areas.

Amy became director of the RA+BP in 2015, bringing a background in the arts that included a dance career in New York City. She chose Rahway as a great place to raise a family.

Amy joined the RA+PB in an exciting time of arts and culture-driven redevelopment in Rahway, a State-designated Transit Village. Multi-family and mixed-use apartment buildings, including artist housing, had been constructed in the downtown, centered on the NJ TRANSIT Rahway Station and the adjacent Train Station Plaza. The Union County Performing Arts Center (UCPAC) had completed renovation of the Main Stage theater building and built the Hamilton Stage theater.

As the reality of COVID-19 settled over New Jersey, Mayor Raymond Giacobbe, the City of Rahway and community partners banded together to support local businesses. Like many SID managers across New Jersey, the RA+PB was well-situated to mobilize businesses, local art institutions, and community members to respond to the social and economic fallout of the pandemic.

In May, the City of Rahway and the RA+BP launched the City of Rahway CARES Forgivable Loan Program, funded by the SID special assessment, to provide loans of up to $5,000 to qualified small businesses in the SID. The program, managed by the Union County Economic Development Corporation (UCEDC), directed $240,000 in forgivable loans to 69 local businesses over a period of about six weeks.

Businesses also received assistance from a local chapter of the Frontline Appreciation Group (FLAG), a nationwide program that began in New Jersey. The initiative uses donated funds to purchase meals and beverages from local restaurants and cafes to donate to front-line workers. The Rahway chapter raised over $20,000.

“Rahway is a very strong, tight-knit community, so people were eager to support the businesses and make sure they survive as best they could,” says Amy.

In mid-June, the City closed off portions of Cherry, Monroe, and Lewis Streets, all in the heart of the downtown, to vehicular traffic to serve as outdoor seating and dining areas. Rahway placed additional chairs and tables in the existing Paseo Alleyway, a public walkway off of Main Street that has been used as an arts space since 2017. The outdoor spaces have drawn resident and visitors into the downtown. They have allowed restaurants to conduct safe, socially-distanced business and have served as the sites of spontaneous musical performances.

The City also designated several outdoor recreational areas where businesses, such as yoga studios, can conduct classes. Businesses can use the spaces free of charge after registering their events with the City. The Train Station Plaza serves as one of the designated recreational areas, and also continues to host a farmers’ market, though reduced in size.

“These outdoor spaces have done a lot to bring the community together to keep businesses in those areas active and bring awareness to those businesses,” says Amy.

With restrictions on public gatherings, continuing the RA+BP’s mission to promote the arts and arts-driven economic development has required a great deal of creativity. For example, as part of the RA+BP’s Art Selfie Stroll, participants follow a clue sheet to discover 10 unique murals around Rahway, snap a selfie with the art, and submit the photos online to compete for $50 gift cards to participating local businesses.

The RA+BP participates in regular business recovery meetings that bring together the mayoral administration, municipal departments, and community partners. The Departments of Recreation, Health, Engineering, and Public Works have played important roles.

The City’s efforts also benefit from staff members holding positions with both the City and the RA+BP. The Rahway City Planner, Cindy Solomon, serves as Executive Director of the RA+BP and played a major role in advancing COVID-19 response initiatives. The Economic Development Manager for the City, Ann Marie Williams, serves as co-Managing Director of the RA+BP, allowing close coordination between the City and the RA+BP’s business support efforts.

“I think that we have people who give a full picture,” says Amy. “Everybody is trying to accomplish the goal, instead of giving the reason why we can’t do it.”

Downtowns throughout the state are facing unprecedented challenges, requiring a new way of looking at spaces and assets to discover opportunities.

“Rethink spaces,” Amy advises. “Look at everything with a fresh set of eyes. Look at it with the possibilities [in mind] and not the problems.”

And you never know if it will work if you don’t try.

Continuous communication with businesses and artists has also proven key. The RA+BP has regular conversations with local business owners and conducts surveys to identify challenges and needed supports. The RA+BP sends out emails to local businesses and artists concerning RA+BP activities, updates on federal and state programs and policies, and arts and culture grants. Social media has been an important tool for pushing out information.

Downtown Rahway has stepped up to meet the challenges of COVID-19, but the pandemic isn’t over. At business recovery meetings, the City Administration, the RA+BP and other participants discuss possible scenarios for the trajectory of the pandemic and effective responses. When the cold, winter months arrive, outdoor dining may no longer be an option. The RA+BP is proposing designated parking spots for pick-up and take-out from restaurants and retail businesses. The RA+BP has also joined the statewide twitter campaign #winningwinterNJ where communities share ideas for keeping downtowns active during the winter. The campaign was inspired by a Downtown NJ online forum held in October.

Even amid dramatic drop-offs in ridership, transit-friendly communities such as Rahway have proven resilient to unprecedented circumstances. Multiple modes of transportation, walkability, mixed-use development, flexible public spaces, a vibrant mix of activities, and a managed SID create endless opportunities for adapting to these difficult times.

Amy hopes to see some innovations last beyond the pandemic. Prior to COVID-19, residents of new multi-family, downtown buildings tended to live in Rahway but work and play elsewhere, she says. Those residents are now more inclined to shop, dine, recreate, and use services locally and have discovered what the downtown has to offer. The outdoor seating areas in particular have drawn residents to the downtown, and Amy expects the spaces to become permanent features of the city. 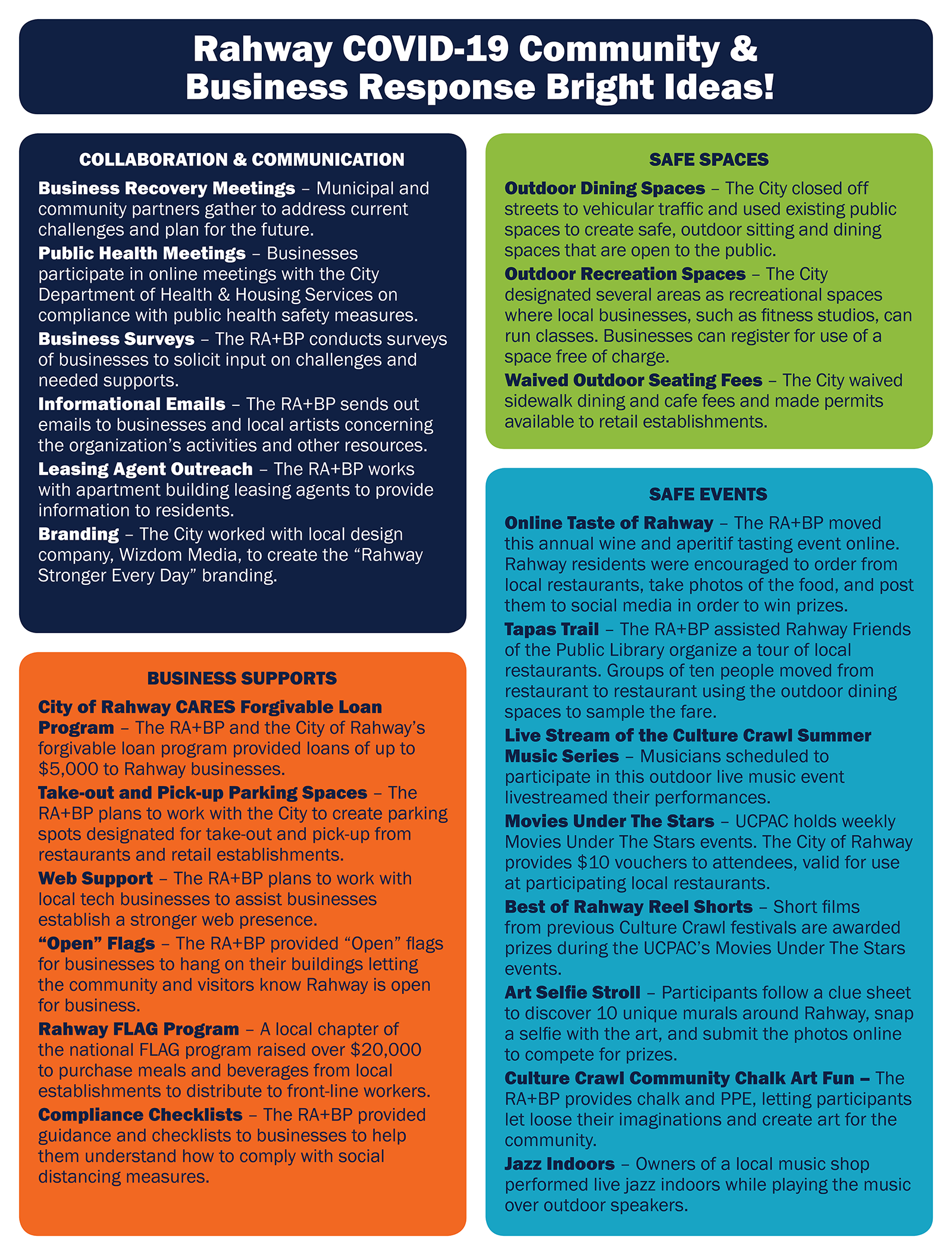