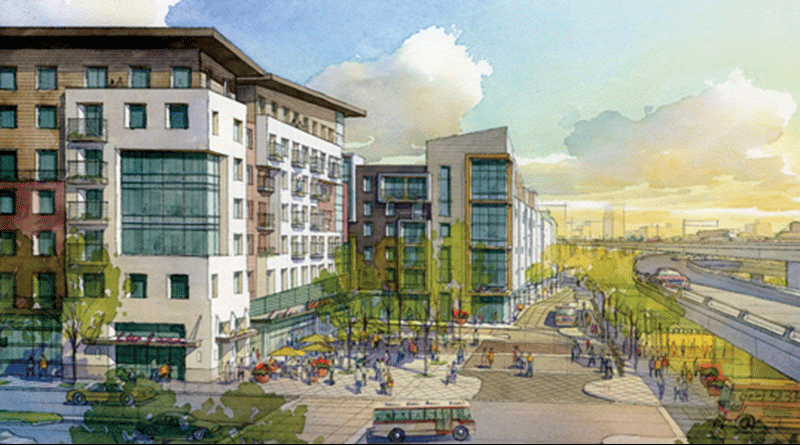 Communities seeking models can look to those that have advocated for good eTOD planning and that have successfully brought new affordable housing options to their transit-served neighborhoods. Some have promoted eTOD in partnership with bicycle and pedestrian-friendly amenities, while others have found creative investors and stakeholders for their projects. There is no one best method for planning mixed-income communities, but all successful projects have the same underlying asset—strong local partnerships. eTOD projects require cooperation amongst financial lenders, eTOD funders (when available), developers, local government, community groups, and of course, community residents.

With an impressive public transportation network and a large population of commuters, New Jersey provides many opportunities for eTOD planning and implementation. Teachers Village, an eTOD project in Newark, NJ, resulted from the efforts of the RBH Group, a real estate financing, development, and management company. Teachers Village is located near dozens of bus stops and routes, the Newark Light Rail, and Newark Penn Station. The project was built to accommodate a mix of incomes. Many of the apartments are designed to serve teachers and to encourage them to live near their schools.

Ron Beit, CEO of RBH Group, and a promoter of eTOD believes that “affordable housing in transit-oriented developments can be made possible when financing tools, such as Federal Low Income Housing Tax Credits, and government incentives are made available to developers.” Between 2008 and 2013, New Jersey offered state urban transit hub tax credits to help fill the financing gaps in eTOD projects. These credits could only be used for projects in close proximity to a transit hub, so the credits were specific to TODs. “Wherever the city interfaces with developers—whether that is a planning board or some other government body—policies at the local level can be leveraged to increase affordable housing requirements,” Beit said.

In Denver, working families who earn between $22,000 and $55,000 per year spend an average of 59% of their gross household income on housing and transportation alone. In 2010, Enterprise and Denver-area partners united to launch the Denver Regional Transit-Oriented Development Fund to create and preserve affordable housing bordering current and future Denver transportation corridors. This Fund was the first of its kind in Denver to offer financial support exclusively for eTOD projects. Seven years later, the Fund has a budget of $24 million, and serves seven Metro Denver counties with purchase of properties for affordable housing and supporting commercial space. Eligible uses of the Fund include multifamily rental housing at 60% area median income (AMI) and below, multifamily for-sale housing at 95% AMI and below, and mixed-use and mixed-income communities. AMI is calculated based on the US Census Bureau’s median family income estimates, where half of a geographic area’s household income is above that midpoint, and half is below that point. As of May 2016, the Fund had allotted nearly $20 million for the preservation and construction of over 1,100 affordable homes at 13 transit-accessible properties across Metro Denver.

An eTOD project located approximately five miles west of Denver’s central business district, Villas at Wadsworth Station has direct access to the newly built Wadsworth rail station and West Rail Line. The project was not funded by the Denver eTOD Fund (as the Fund is restricted to projects inside the City limits of Denver) but by other investors who wanted to support the project. Thanks to a local bank’s generous low-interest loan, and the Colorado Division of Housing, the Villas project was able to fund the preservation of 100 units of multifamily rentals. Previously, the units had been unsubsidized and rented to individuals in the 60% area median income (AMI). This project demonstrated a need for the Denver eTOD Fund to become a regional resource for funding and planning support for, areas that have an increasing need for preservation and investment.

The Metropolitan Council (the Twin Cities MPO) in Minneapolis administers a 17-year-old Livable Communities program, which has awarded $27 million in grants to support eTOD projects. When planning the construction of a new light rail line, Central Corridor, a group of national and local funders decided to form the Central Corridor Funders Collaborative. The Collaborative promotes eTOD by advocating for and funding affordable housing, promoting local economic development ventures, and putting forward place-making efforts in neighborhoods that border the new light rail line.

In 2011, a 1.24-acre mixed-use project, Frogtown Square, was constructed in the historic Frogtown neighborhood of Saint Paul, along the Central Corridor. The seven-story project features 50 units of affordable senior housing, 11,700 square feet of ground floor retail, and an underground parking garage. Frogtown Square was developed by a group of local nonprofits including Neighborhood Development Center (the lead developer), Model Cities, Inc., Greater Frogtown CDC, and Aurora/St Anthony Neighborhood Development Corp, all of whom provided acquisition and predevelopment funds for the project. The developers used federal funding from the US Department of Housing and Urban Development and grant money from the Federal Home Loan Banks for residential construction. A community support grant from the US Department of Health and Human Services Office, as well as funding from the City of Saint Paul and others, funded associated retail construction. Prior to redevelopment, the site housed four vacant, blighted buildings, and a paved surface parking lot.

Due to rapid expansion and demand, Bay Area housing is among the nation’s least affordable. Groups such as the Center for Community Innovation at the Institute of Urban and Regional Development, the Nonprofit Housing Association of Northern California, and Reconnecting America, have partnered to advocate the Great Communities Collaborative‘s work to plan TODs with mixed-income communities in mind. These groups and other stakeholders work to expand the Bay Area into one of the biggest eTOD markets in the US.

Approximately 50% of all Bay Area households spend more than 30% of their income on housing costs each year, compared to 33% of residents nation-wide. In recent years, affordable housing’s proximity to most workplaces has diminished. Consequently, the number of Bay Area commuters who travel more than 45 minutes to get from home to work is the second highest in the country. Low-income Bay Area families (earning between $20,000 and $50,000 annually) spend roughly 63% of their household budgets on the combined costs of housing and transportation–the highest percentage in the country.

In 2011, a consortium of transportation organizations, financial firms, and non-profits established the Bay Area Transit-Oriented Affordable Housing Fund (TOAH). TOAH was formed to provide financing for affordable housing development, and to create fundamental community services near transit lines throughout the Bay Area.

With an initial $10 million investment from the Metropolitan Transportation Commission and additional capital from Citi Community Capital, Morgan Stanley, the Ford Foundation, Living Cities, and the San Francisco Foundation, TOAH has now grown to $50 million. TOAH uses these assets to achieve its mission: to promote eTOD in all nine-counties of the Bay Area by catalyzing affordable housing development, community services, fresh food markets, and other neighborhood assets. TOAH offers developers access to flexible and affordable capital to purchase or rehabilitate available properties near transit lines, and ensures that low-income families share the same benefits of walkable neighborhoods and access to public transit as the rest of the community.

One TOAH project, MacArthur Transit Village is being developed in five phases on a 7.7-acre site in North Oakland, adjacent to the MacArthur BART station, the busiest rail station and bus hub in East Bay. The developer, BRIDGE Housing Inc., is working with the City of Oakland, the Local Redevelopment Agency, and the State as key financial partners, and BART as a land owner and public partner. The project comprises 675 new rental housing units (112 of which are affordable), a 478-spot parking garage, 42,500 square feet of neighborhood retail and commercial space, 5,000 square feet for community use, and station renovation (including bicycle-friendly amenities). In a successful example of public-private partnership, BART provided land to the developer in exchange for construction of the parking garage. Affordable housing units were completed in December 2015, and the remaining units will be phased in between 2016 and 2021. The project received $30 million in redevelopment funds and $40 million in state TOD and infill funds and has created immense opportunities for a walkable and equitable community around the station. With easy access to public transit, affordable housing options, and bicycle parking areas, this transit village project is likely to generate other developments in the neighborhood.

Want to know more about achieving eTOD in your community?