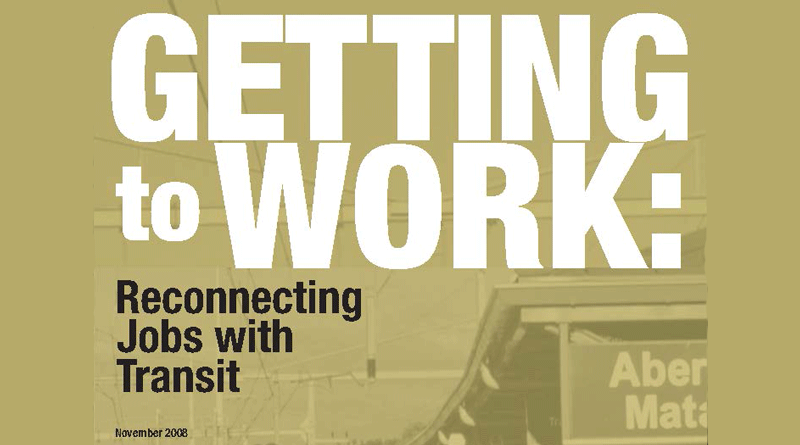 Getting to Work: Reconnecting Jobs with Transit (2008)
By Tim Evans, New Jersey Future

The policy and research group, New Jersey Future, recently released Getting to Work, a report by research director Tim Evans, documenting the commuting habits of New Jersey residents and demonstrating the important connection between the state’s pattern of employment locations and its transportation challenges. (For full disclosure, Evans is a member of our editorial board.) In Getting to Work, Evans examines data drawn from both national sources—the 2000 Census, the 2006 American Community Survey, US Bureau of Labor Statistics and US Department of Transportation—and state sources, such as the New Jersey Department of Labor and NJ TRANSIT.

According to Evans’ analysis, New Jersey residents experience the third longest commute times and their time spent traveling to work is growing more rapidly than elsewhere in the nation. Evans finds that many of the state’s historic, dense and transit-friendly job centers have been forsaken, with the notable exception of Jersey City, as job growth moved to suburban office parks. Commute destinations have been, and continue to be, spread out as the number of major workplace destinations grows. This decentralization of employment results in an omni-directional rush hour that inhibits carpooling and effective public transit. Worse still, some of the older job centers, often possessing good transit access, have actually been losing jobs, contributing to their economic plight. The redistribution of employment to car-dependent office parks also undermines state policy goals for reducing greenhouse gas emissions, because such destinations draw more cars onto the road, increasing average vehicle miles traveled.

One hopeful circumstance is that New Jersey has an extensive rail transit system in place and a workforce willing to use transit—provided it takes them where they need to go. Evans contends that the focus of transit-oriented development has largely been on higher density residential uses, but that employment-related uses near transit hubs are at least as important in achieving New Jersey’s policy goals. The report recommends the state take a more active role in recentralizing jobs around transit- and pedestrian-friendly locations.