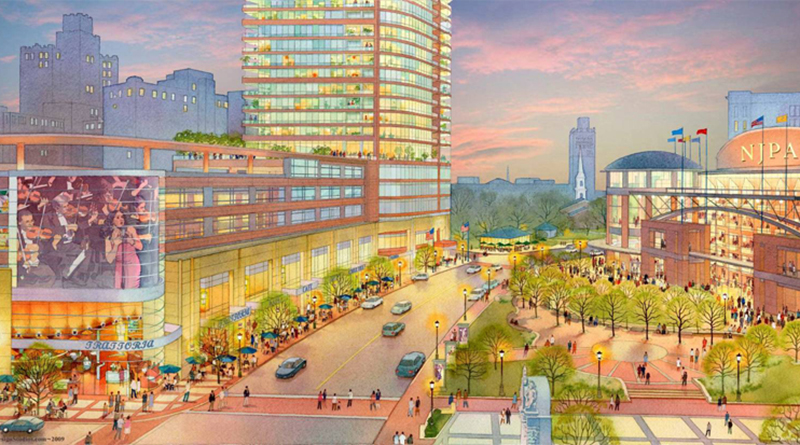 Situated only eight miles from Manhattan, New Jersey’s largest city Newark enjoys a number of distinct advantages that makes it an obvious location for TOD. Two downtown commuter stations—Penn Station and Broad Street—are positioned like bookends at either edge of the business district and were connected in 2003 through an expansion of the Newark Light Rail. This infrastructure, together with the remnants of a classic Victorian street plan—wide avenues that once carried a network of electric streetcars—is likely to pay dividends as the real estate market strengthens. These advantages transcend social and economic conditions and mean that when times improve, a dense fabric of transit infrastructure may become Newark’s greatest draw.

Recent projects have already capitalized on these assets. The 35-story art deco Raymond-Commerce (or Lefcourt Newark) building stood vacant for two decades before its 2004 renovation and rechristening as Eleven 80. The building now houses 317 rentals. The Military Park light rail stop is located partly in its basement. While the building has been under foreclosure since last fall, it remains 80 percent occupied, commanding some of Newark’s highest residential rents.

Across Military Park, the New Jersey Performing Arts Center (NJPAC) is also located at a light rail stop on the new light rail line about halfway between the two downtown train stations. Opened in 1997, NJPAC, the home of the New Jersey Symphony Orchestra, was one of the first major components of the city’s ongoing redevelopment effort. It offers proximity to the Newark Museum, a high concentration of office space, and the Rutgers and NJIT campuses in the adjacent University Heights neighborhood. Now it is also bolstered by the light rail station and is beginning to serve its envisioned role as a springboard for major, adjacent development projects.

Two recently announced projects close to NJPAC have benefitted from the state’s Urban Transit Hub Tax Credit (UTHTC) program and highlight investor confidence in the local residential market. One Theater Square (aka Two Center Street) expected to become the city’s tallest building at 44 stories, will feature 328 rental apartments (20 percent set aside as affordable), 22,600 square feet of street level retail space, and 595 parking spaces. One Riverview at Rector Street, a 25-story, mixed-use building, will consist of 152 condominiums (also with 20 percent set aside as affordable), 6,000 square feet of retail space and 154 parking spaces. Both projects have been approved for a 20 percent tax credit under the UTHTC program.

Another focal point for potential transit-oriented development in the city is the area around Broad Street Station, at downtown’s northern edge. In 2008, the city published a redevelopment plan for the area which was drafted in consultation with the architectural firm of Skidmore, Owings & Merrill. Newark senior planner Perris Straughter, who played a lead role in the project, described a multifaceted approach to redeveloping the area, combining plans for numerous parcels with diverse ownership, and drawing broadly on a number of TOD principles. Traditional post-war parking requirements have been relaxed for new developments in the blocks around transit facilities; densities have been increased; mixed uses are now encouraged; and the needs of pedestrians are prioritized.

An early phase of implementation is the ongoing demolition of the once-notorious Baxter Terrace housing project, a low-rise development formerly located on the western edge of the Broad Street Station area. The plan calls for construction of medium-density, mixed use development, with a mix of affordable and market-rate housing. When finished, the development will reconnect the blocks along the east side of Olmsted’s Branch Brook Park and their adjacent North Ward neighborhoods of Forest Hills and Roseville with the University Heights neighborhood and the city’s central business district.

The old streetcar corridors along the city’s major arterials and their still vibrant neighborhoods provide still another opportunity. Associate Professor Darius Sollohub, an architect and director of the Infrastructure Planning Program at NJIT’s College of Architecture and Design, headed a study, funded by the Tri-State Transportation Campaign, that examined TOD potential along Springfield Avenue to Irvington, through the city’s low-rise neighborhoods, west of downtown, where NJ TRANSIT’s GoBus—a light version of Bus Rapid Transit (BRT)—was initially introduced. BRT seeks to capture a number of the benefits of light rail or streetcar service at a fraction of the cost. GoBuses are distinguished by their distinctive color scheme, improved seating, fixed and limited stops, and the promise of faster service.

Through his studies of BRT usage along the Springfield Avenue corridor, Sollohub has found heavy demand for the service has contributed to ongoing discussions with community leaders and private developers about the possibilities for TOD in the corridor. One potential site lies at the heart of the city’s historic Springfield-Belmont neighborhood: a parcel adjacent to the busy Go Bus stop, where Springfield Avenue crosses Irvine Turner Boulevard.

With all of its transit assets Newark should be a potent location for TOD. Beyond the two major rail stations that anchor the downtown, the TOD potential of Newark’s other neighborhoods is noteworthy, capitalizing on the Newark Light Rail and GoBus. As the benefits of sustainable, urban environments are rediscovered in the coming years, the inherent value of Newark’s transit infrastructure should only grow.