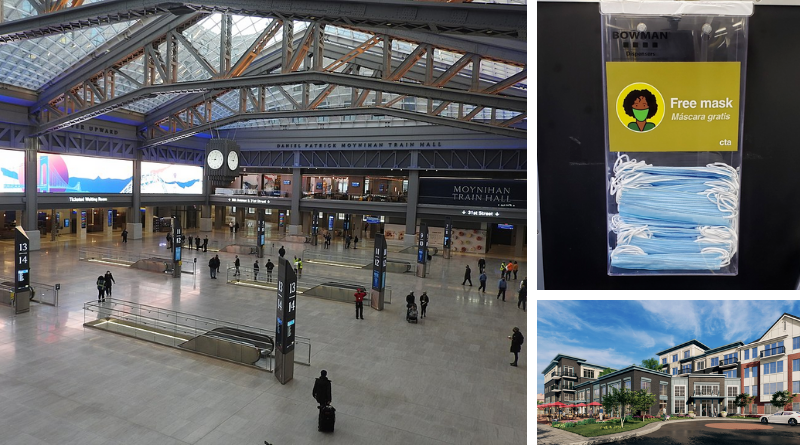 With a new transit-friendly administration, rapid vaccination, and federal stimulus dollars, New York Metropolitan Area’s transit agencies can finally begin to overturn the financial hardships they incurred during 2020. Federal aid has successfully avoided sweeping service and job cuts at the MTA and NJ TRANSIT, at least in the near future. Moreover, both agencies—along with the Long Island Rail Road—successfully met the end of the year deadline to install and test Positive Train Control (PTC) systems on their trains. A new administration also brings with it heightened support and hopes for the quick commencement of work on the long-anticipated Gateway Project between New Jersey and New York.

MASSACHUSETTS—Transit in 2020, Driven by Coronavirus Pandemic, Must Sort Through Mixed Signals of Coming Year
Mike Gajda, Cambridge Day, December 31, 2020
The pandemic has had far-ranging impacts on all aspects of travel and transit around the Greater Boston area. Shared streets programs that had provided much-needed relief to pedestrians and small businesses are now witnessing an uncertain future with the harsh winter months. Due to the overwhelming popularity of cycling during the pandemic, Cambridge City Council passed an ordinance to build 22.6 miles of bike lanes around the city. Further, MBTA’s Forging Ahead process created a rift between the agency and transit advocates as the program aimed to cut service to reduce budgetary concerns. With the virus continuing to persist and the beginning of a mass inoculation drive, it is safe to say that the area will continue to experience significant public transportation changes.

ILLINOIS—CTA Announces Free Face Mask Pilot Program
MassTransit, December 30, 2020
The Chicago Transit Authority (CTA) has begun a pilot program to provide free, disposable masks on its buses. CTA will offer the program first on 200 buses serving 20 routes around the city.  The pilot will give the agency an assessment of demand for masks and logistics for replenishing their stock on buses. If successful, CTA will expand the program to the remainder of their buses and rail stations.

Virus Took Transit Systems from Growth to Crisis
Dan Zukowski, Trains, December 29, 2020
For the two decades prior to 2020, America’s transit agencies saw enormous success in ridership numbers, funds, and infrastructure development. However, with pandemic-induced remote work and stay-at-home mandates, transit agencies saw a steep, unprecedented decline in ridership and revenues and increased costs of sanitizing and protective equipment. This combination is slowly bleeding these agencies dry, and federal aid falls short of the deficit that many organizations are trying to cover.

CALIFORNIA—New California Housing Proposals Face Uncertain Fate from Lawmakers Amid Covid Concerns
Louis Hansen, The Mercury News, December 29, 2020
Housing advocates in California have resorted to small legislative fixes to reduce the state’s housing shortage. An upcoming legislative session on January 11 will include new proposals to make it easier to build smaller homes by subdividing large residential lots into two parcels, among other measures. Responding to the immediate threat of an eviction crisis, lawmakers have prioritized the extension of the state’s eviction moratorium and expansion of homeless shelters. Other senate bills include taller apartment buildings around transit, quicker redevelopment of vacant big box stores, and easing environmental reviews on projects.

VIRGINIA—WATA Ridership Declines Amid Pandemic, Will Continue Providing Free Transit Throughout January
Alex Perry, The Virginia Gazette, December 29, 2020
The Williamsburg Area Transit Authority (WATA) will continue to offer free rides on its fixed routes through January—a move that first started on March 18, 2020. Despite this, ridership has dropped by an estimated 50 percent since spring. WATA, funded by federal and state grants, advertising revenue, participating localities, and rider fares, received a $5.4 million federal COVID-relief grant to help cover losses in fare revenues and the increased costs of cleaning and equipment.

NEW YORK—It Looked Pretty Good at the Beginning, But 2020 Didn’t Trend Well for Transit
Mark Hallum, Bronx Times, December 28, 2020
In more ways than one, 2020 has been a year of reckoning, and New York’s transit agencies are no strangers to the devastation brought forth by this year’s events. Foremost, the city’s streets have been deadlier this year, with a record 234 roadway deaths. Mayor Bill de Blasio’s administration has also fallen short of delivering 30 miles of bike lanes promised this year. Federal funds have been critical in saving the Metropolitan Transportation Authority (MTA) from implementing drastic service cuts and fee hikes. However, the agency still faces an $8 billion deficit but hopes that future funding will help offset the pandemic’s devastating impact. Finally, the Moynihan Train Hall opening on December 31st, a much-needed expansion of the aging Penn Station, will add 17 new tracks and relieve congestion at the station.

Wood-Ridge, N.J.: Not Too Close to the City, or Too Far Away
Jay Levin, The New York Times, December 30, 2020
The Bergen County community of Wood-Ridge is the focus of this week’s Living In article, a weekly feature looking at real estate in the New York metro area. The borough is rapidly growing thanks to the development of Wesmont Station, a transit-oriented development built on the site of the former Curtiss-Wright aircraft factory site. Construction of the TOD began in 2012 and has resulted in 1,050 new homes (about half are rentals). Another 500 are planned between now and 2024 when the project will be complete. The NJ TRANSIT Wesmont Station opened in 2016 on the Pascack Valley Line. Travel to New York Penn Station takes between 30 and 40 minutes.

NEW YORK—New Train Hall Opens at Penn Station, Echoing Building’s Former Glory
Christina Goldbaum, The New York Times, December 30, 2020
After three years of construction, the Moynihan Train Hall will open to the public on January 1st as a waiting room for Amtrak and Long Island Rail Road (LIRR) passengers. While this project comes as a beacon of hope at an undoubtedly dark time for the city and its transit agencies, critics note that the new waiting hall will caters primarily to Amtrak passengers who account for only 5 percent of Penn Station’s 650,000-weekday riders. However, to address the critical problem of overcrowding at the station, elected officials have proposed two other projects—the Gateway and Penn South.

NEW YORK—Public Resistance Hovers Over Waterfront Development Projects
James Carsey, The Hudson Independent, January 1, 2021
Two new projects—South Depot Plaza and a “Boatel”—are set to change the Tarrytown Waterfront near the Metro North tracks. The former includes retail and residential uses, including nine affordable housing units. However, public response to the project has been widely varied, with critics concerned about the density, mass, and height of the project and the impact that it may have on traffic in the area and views from neighboring projects. However, proponents praise the project’s contribution to solving the affordable housing problem in the town. The Boatel project elicited concerns about a lack of supporting resources and parking in the area.

CALIFORNIA—2020 in Review: a Year Like No Other for Metro
Steve Hymon, The Source, December 31, 2020
Like most other transit agencies across the country, Metro has faced a tough year with plummeting ridership numbers and revenues. However, the agency has made progress on several projects. Notable among these include the NextGen Bus Plan, multiple station and line extensions, transit hubs, and other user experience and service overhauls. The NextGen Bus Plan aims to establish high-frequency and high-quality transit corridors across the network to match the travel patterns across LA County. Moreover, construction continued on crucial infrastructure projects, including the Crenshaw/LAX Transit Project, Patsaouras Bus Plaza, and Willowbrook/Rosa Parks Station Customer Center, Transit Hub and Mobility Center.

FLORIDA—North Miami Downtown Revival to Kickstart in 2021
The Miami Times, December 31, 2020
Downtown North Miami will see three new projects that will address its affordable housing concerns. One of these projects, Eleven55 NoMi Village, will include 384 new workforce housing units that will replace 12 four-unit vintage apartment buildings on the site. Further, the Miami-Dade Commission has approved two transit stations along the Brightline tracks—one near 14th Avenue and the other near the Sole Mia development near Florida International University (FIU).

PENNSYLVANIA—KOP Rail Project Gets $360K Federal Lifeline For 5 New Stations
Justine Heinze, Patch, December 28, 2020
The Federal Transit Authority (FTA) awarded a $360,000 Transit-Oriented Development Planning grant to the Norristown High-Speed Line Extension that will add five new rail stops in the King of Prussia area. This funding comes after a period of turmoil in the project’s timeline as a budget shortfall forced SEPTA to slash funds on capital projects. The project will reduce travel time between the Center City and King of Prussia, and improve the region’s sustainability and economic development. These TOD Planning grants encourage mixed-use development near new transit projects nationwide.

CHINA—Village Construction Reaches Milestone
Yuan Shneggao, China Daily, December 31, 2020
The Asian Games Village for the Asian Games Hangzhou 2022 will begin operation by March 2022. Comprising 108 buildings, the Village will provide accommodation, recreation, and entertainment services for over 10,000 athletes. The Village adopts a transit-oriented development model, and more than 50 percent of the complex meets China’s standards for green buildings. Following the Games, part of the Village will be sold to locals as residences. The international and public zones will include a community cultural center, community sports center, youth center, museum, concert hall, and a library.

December 10, 2018 Stephanie DiPetrillo Comments Off on After Flood Protections, Bound Brook is Reborn