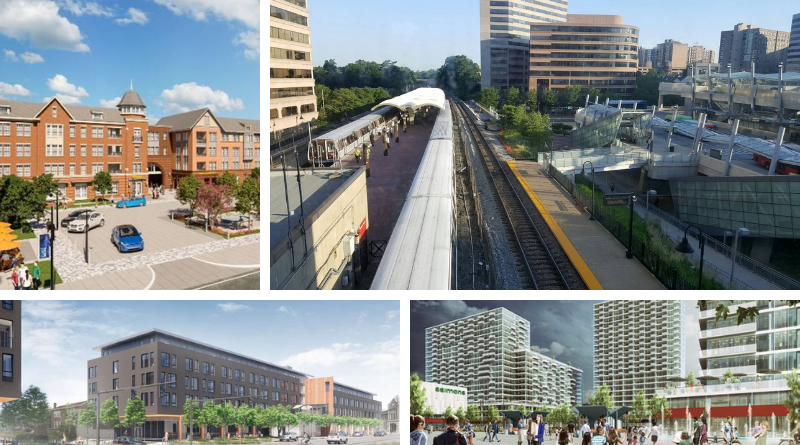 AvalonBay Communities Inc. has acquired a 15-acre property next to the Somerville train station, thus taking a step towards a new phase of the Somerville Station transit-oriented development. Located in Somerville’s downtown, the mixed-use development will include 374 apartment units, a civic center, retail space, and NJ TRANSIT parking facilities. In addition to the AvalonBay apartments, the PulteGroup will build a new community of 156 for-sale townhouses at Somerville Station. Construction is underway on the project, and, together, both projects comprise 80 acres bound by the railroad right-of-way, South Bridge, and Route 206. The new developments reflect Somerset Development’s master-planned vision for a mixed-use transit village anchored by the Somerville train station.

INDIA—India’s Pandemic Recovery Plan Could Cost Air Quality Goals
Aniruddha Ghosal, ABC News, December 10, 2020
Along with the coronavirus pandemic, India is facing another public health emergency—critically polluted air. This problem is especially stark in the nation’s capital city, New Delhi. Delhi’s pollution hits an annual high during the winter months as burning crop debris from neighboring states coincides with cooler temperatures that trap the smoke close to the city. Historically, local authorities restricted the use of private vehicles and encouraged public transit use to curb pollution in the city. However, with a surge in coronavirus cases in the city, officials have no choice but to limit passenger numbers on public transportation modes. Simultaneously, the pandemic has put a halt to India’s plans to switch to clean energy sources and has forced the government to increase coal production to reduce imports.

HONG KONG—Hong Kong Rolls Out COVID-19 Test Vending Machines in Public Transit Stations
Rachel Tillman, Spectrum News, December 7, 2020
Starting December 7, Hong Kong residents will be able to access COVID-19 testing kits from vending machines at ten public transit stations. The government will distribute about 10,000 test kits among the vending machines, and residents will be able to use their Octopus transit cards to get access to these kits free of cost. Hong Kong officials have turned to this move after a renewed surge of coronavirus cases in the region. This decision comes amid a series of other regulations ordering public gathering places to close and limiting in-person gatherings.

‘Existential Peril’: Mass Transit Faces Huge Service Cuts Across U.S
Christina Goldbaum and Will Wright, The New York Times, December 6, 2020
From Boston to Atlanta, transit agencies nationwide are facing financial crises due to the ongoing pandemic. The shortage of revenue translates to a cut in service—something that could profoundly impact the recovery of cities big and small for years to come. Transit agencies have traditionally operated using resources from both the farebox and local and state subsidies. However, with both sources grappling with financial distress, these agencies have no choice but to turn to Washington for support. After months of lobbying by transit leaders, a sliver of hope emerged in the form of a proposed $15 billion relief package for transit agencies before the end of the year. Even with funding, it is unclear when or if public transit will make a full comeback. Some commuters may continue to work remotely, and others may abandon transit if service continues to deteriorate. Transit experts caution that with increased cuts, public transit agencies could plunge into a death spiral that will continue to keep riders away and result in a more profound financial crisis.

NJ Transit board authorizes Portal North Bridge agreement with federal government, last step in project funding
ROI-NJ, December 10, 2020
Earlier this week, NJ TRANSIT officials authorized a Full Funding Grant Agreement with the Federal Transit Administration (FTA) to replace the 110-year-old Portal Bridge. This agreement is the final stage of the Capital Investment Grant Process that will fund the $1.8 billion project that has caused numerous delays of NJ TRANSIT and Amtrak trains over recent years. Per the agreement, the FTA will provide $766.5 million, and the Federal Highway Administration will contribute $57.1 million. New Jersey’s share, $811 million, and Amtrak’s obligation, $261.5 million, will cover the remaining amount. NJ TRANSIT and Amtrak will construct, operate, and maintain the new bridge and 2.5 miles of railroad infrastructure. The funds will also provide financing for 25 new multilevel rail cars.

Bergen County gets OK for $150M borrowing plan. Here’s what it will include
Terrence T. McDonald, NorthJersey.com, December 8, 2020
On Wednesday, state officials approved Bergen County’s $150 million borrowing plan allowing the county to build a mixed-use building in Hackensack that will include residential units, a new bus station, and county offices. County officials are optimistic about the project’s ability to move NJ TRANSIT buses off Hackensack streets, to boost public transit capacity in an area seeing dramatic real estate growth, and to create housing intended for middle-income workers. The building itself would be located on River Street, close to the county headquarters, and would have two stories each of parking and county offices. The forthcoming bus station, planned for a capacity of 12 buses, would replace an existing terminal. In addition, a residential building on the site would add 100 apartment units to the area. However, the project has garnered a fair share of criticism from politicians concerned about the increase in debt service costs to Bergen County, in part because the new borrowing comes only weeks after the county issued $28 million in emergency bonds to cover revenue losses due to the pandemic.

NJ spending $190M to renovate Newark Penn Station. Here’s what improvements you can expect
Colleen Wilson, NorthJersey.com, December 8, 2020
Governor Phil Murphy announced $190 million in renovations to Newark Penn Station on Tuesday. A portion of the funds, $30 million, will go towards immediate repairs, and the remaining $160 million will support renovations over the next five years. The funds will go towards improving platforms, renovating benches and bathrooms, replacing platform doors and lights, upgrading existing HVAC and air-handling units, painting and tiling work, and washing the station’s exterior. This investment aligns with Kevin Corbett’s focus on capital investments during his time as the head of NJ TRANSIT, especially at neglected facilities such as Newark Penn, New York Penn, and other stations around the state. The state also approved $600 million in borrowing to cover its share of the construction costs for replacing the Portal North Bridge, which is located between Newark Penn and New York Penn Station.

MARYLAND—Multifamily Zoning Proposed Near Metro Stations
Briana Adhikusuma, Bethesda Magazine, December 8, 2020
On Tuesday, Council Member Will Jawando proposed two new county bills to allow multi-family housing near Metro stations and to protect renters from price gouging. The bills propose a zoning change that would allow multi-family housing on R-60-zoned residential property within one mile of a Metrorail station. The plan, called the More Housing for More People initiative, is based on the Missing Middle Housing concept that focuses on increasing the number of multi-family units compatible with scale, form, and construction with single-family homes. Jawando also plans to introduce legislation to protect renters from rent gouging in transit areas. The bill will require landlords to comply with the State Department of Housing and Community Affairs rent guidelines if the property is within a mile of a train station or within a half-mile of a bus rapid transit station. Jawando hopes the bill would help limit gentrification and displacement.

Ben van der Meer, Sacramento Business Journal, December 7, 2020
The Sacramento Area Council of Governments (SACOG) has received 23 submissions in recent months for its Green Means Go program. The program aims to encourage development patterns that help California reduce its greenhouse gas emissions. SACOG CEO James Corless believes that the sticking point to moving forward is the need to develop areas around light-rail stations—project that would require state dollars. However, Sacramento finds itself in an unfavorable position in this regard as state funding is more likely to go to areas with higher population densities and more robust transportation networks. Corless is confident that the Green Means Go program has the potential to change this by demonstrating where local cities and counties can get the most bang for their smart growth buck.

MISSOURI—Construction Begins on $90 Million Mixed-Use Development in St. Louis
REJournals, December 7, 2020
Construction has begun on a new mixed-use development, Expo at Forest Park, in St. Louis. The project will comprise 287 market-rate apartments and 30,000 sq. ft. of retail space near the Forest Park-DeBaliviere Transit Center. The development plans propose to reuse the existing transit infrastructure and site adaptively, and to provide garage parking for Metro Transit commuters and improved access to the region’s MetroBus network and the Metro Link light rail system. Brinkman Constructors, the project’s developers, Trivers, Bi-State Development, and Tegethoff Development, have worked closely with local leaders, regional partners, residents, and community groups to ensure that the project aligns with the neighborhood’s vision and needs.

INDIA—L-G Chairs Meet to Oversee Redevelopment of New Delhi Station
Jatin Anand, The Hindu, December 11, 2020
On Thursday, Lieutenant-Governor Anil Baijal chaired the first meeting of the Apex Committee to oversee and facilitate the Redevelopment of New Delhi Railway Station under the National TOD policy Committee. Over the next four years, the project will redesign the station and its vicinity to provide signal-free routes for vehicular traffic and pedestrian-friendly improvements. The project complies with the National Transit Oriented Development policy that aims to develop around or along a transit node or corridor to facilitate ease of access to transit facilities. The policy requires the provision of residential, commercial, civic, or institutional establishments to enhance local access to plazas, shared parks, and public transport. Its focus is to enable walking, cycling, and public transit use over the use of personal modes of transportation. The project will also include a commercial area and add underground parking for 2,000 vehicles and 40 buses.

CANADA—Transit, Mall Development to Spur Growth of Montreal’s West Island
The Globe and Mail, December 8, 2020
Industry experts believe that Montreal’s new light-rail transit system will change the city’s commercial real estate market. The COVID-19 pandemic has softened Montreal’s office sector and increased its vacancy rate by 11 percent. However, a project such as the redevelopment of CF Fairview Pointe-Claire mall is seen as a welcome sign in these challenging times. The project will add office space, a hotel, street-level shops, rental apartments, and condos in the area and will be completed in the next five years. Two other transit-oriented development projects in South Shore (Solar Uniquartier and Quartier Dix30) and Laval (Espace Montmorency) are underway in the city.