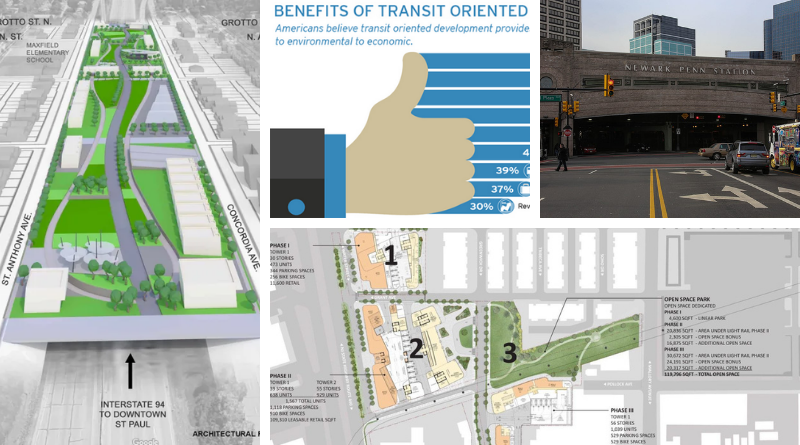 This year’s Newark Regional Business Partnership (NRBP) Real Estate Market Forum focused on equitable development, bringing together developers and community leaders to discuss their vision for developing the City of Newark. Topics included the real estate market forecast for 2022, ongoing and new developments in the City, and how developers work to ensure that their projects reflect the needs of the community as well as $160 million in upgrades at Newark Penn Station that are scheduled over the next five years. Deputy Mayor and Director of the Newark Department of Economic and Housing Development Allison Ladd said that the City’s goal is equity and inclusiveness for any future development.

ROSELLE PARK—Construction Hums Along at 325-Unit Meridia at Park Square in Roselle Park
Chris Fry, Jersey Digs, March 3, 2022
Linden-based Capodagli Property Company is developing Meridia at Park Square, a new multi-family development on a 1.7-acre parcel spread across two city blocks in Roselle Park. The parcel is located at 10 Westfield Avenue West, about a half-mile from the Roselle Park Station on the Raritan Valley Line. The two-building project will comprise a total of 414 residential units, of which 16 will be reserved as affordable housing.

MORRISTOWN—Speedwell Demolition Making Way for Bank Headquarters in Morristown
Morristown Green Contributor, Morristowngreen.com, March 1, 2022
SJP Properties, in partnership with Scotto Properties, announced today that it will begin demolition of vacant businesses at the future site of Valley National Bank’s new high-performance headquarters. The new 125,000 sq. ft. six-story structure will be located about a half-mile from Morristown Station, which offers midtown direct service to New York Penn Station. When completed in 2023, the new headquarters is expected to bring more than 660 staff to Morristown’s downtown.

JERSEY CITY—Renderings Revealed for 3,000-Unit West Side Crossing Project, Jersey City
Chris Fry, Jersey Digs, February 28, 2022
Bushburg Properties has submitted an application for the initial phase of a planned three-phase development called West Side Crossing to be built at Bayfront, an emerging neighborhood adjacent the Hackensack River in Jersey City. The property totals an area of 8.29 acres, and will also include an extension of the Hudson Bergen Light Rail system. The project will include 3,079 residential units overall, however plans submitted for phase one depict a 30-story tower with 473 residential units, 11,600 sq. ft. of ground-floor retail space, and a 4,600 sq. ft. linear park.

SOUTH AMBOY—New Luxury Apartments Open in South Amboy
Linda Lindner, ROI, March 2, 2022
BNE Realty Group joined South Amboy Mayor Fred Henry to celebrate the opening of Station Bay, a new luxury condominium community in South Amboy on the Raritan Bay waterfront. The property is located in the downtown, within walking distance of the South Amboy Station and the City’s soon-to-open ferry terminal. The project comprises 291 rental residences, including studios, one and two-bedroom residences, and over 37,000 sq. ft. of amenities and services.

ARIZONA—Tucson Equitable Housing Group to Introduce Plans for Cross-Town Affordable Housing Area
Bennito L. Kelty, Tucson Sentinel, March 2, 2022
A community-led group responsible for overseeing Tucson city’s housing policy will introduce a plan for developing affordable housing along transit routes that run from the Tucson Mall to the international airport. The City, in partnership with South Tucson, has been researching the most efficient ways to develop affordable and fair housing, using a $950,000 grant from the Federal Transit Administration. The Commission on Equitable Housing and Development (CEHD) is working on an equitable transit-oriented development (eTOD) strategic plan, which is centered around a 15-mile “north-south transit corridor” that includes approximately 126,000 residents and accounts for about 15 percent of the city’s public transit service area.

Combining Multiple Strategies to Address Urban Mobility Needs While Electrifying Transportation is Essential to Reach Our Climate Targets
Patrick King, cleanenergy.org / Southern Alliance for Clean Energy, February 25, 2022
Mitigating the impacts of climate change will require a holistic approach, and not solely to rely on the adoption of electric transport. A report from Institute for Transportation and Development Policy and UC Davis found that even if governments around the globe aggressively push for full electrification of transportation, we may come close but fall short of achieving a Sustainable Development Scenario of limiting global warming to less than 2° C by 2050 and 1.5° C by 2100. A multifaceted approach to urban design that encourages the use of public transit through transit-oriented development and promotes other alternative modes of transportation will not only help meet climate goals, but also empower disadvantaged communities that bear the brunt of the climate impacts of car-centric urban planning.

ARIZONA—South Phoenix Light Rail Plan Focuses on Displacement, Culture, Health
Christina Estes, Fronteras, March 3, 2022
In South Phoenix, residents are concerned that the light-rail extension to South Central, scheduled to open in the coming years, will subject them to gentrification. The rail-extension will run five miles from downtown to Baseline Road. The city planner, Elias Valencia presented the community’s vision to develop the South-Central corridor into an equitable transit-oriented development and highlighted the need to prevent displacement. The South Central TOD Community Plan divides the corridor into well-connected distinct zones of residential, commercial, community, and recreational hubs. The plan is a result of the $2 million federal grant Phoenix received in 2016.

CALIFORNIA—Supportive Housing to Rise Above Metro Stop in East Hollywood
Steven Sharp, Urbanize LA, March 1, 2022
Little Tokyo Service Center (LTSC) has secured financing for a new affordable housing development, Santa Monica Vermont Apartments, to be built above the B Line’s Vermont/Santa Monica Station in East Hollywood. The mixed-use project will comprise a total of 187 apartments (94 units for permanent supportive housing, 91 units of affordable housing, and 2 units as managers’ residences) and ground-floor commercial space. The transit-oriented development comes amid a homelessness crisis that has worsened with the ongoing pandemic and aims to reduce two of the biggest household expenses: housing and transportation.

MINNESOTA—Proposal To Replace I-94 With a Boulevard Between Minneapolis and St. Paul
BringMeTheNews, March 1, 2022
The Minnesota Department of Transportation’s Rethinking I-94 Project will eliminate the interstate, replacing it with a multi-modal boulevard from Hiawatha Avenue in Minneapolis to Marion Street in St. Paul. The project aims to remedy some of the historic damage caused to the Twin Cities’ neighborhoods and residents, wreaked by the construction of the interstate, and resulting in the destruction of homes, schools, and businesses. Plans for a community-centered boulevard and the return of land to the surrounding communities will provide walkable access to new businesses and neighborhood amenities. The boulevard will be open to driving, limited to short, local trips. Heavier traffic will be directed to I-494 or I-694, which will add less than five minutes of driving time to the trip.

INDIANA—Strategy Essential for Taking Advantage of Rail Projects’ Opportunities
Andrew Steele, The Times / NWI.com, February 28, 2022
At the Destinations 2024 Summit, speakers discussed efforts to increase northwest Indiana’s population and promote economic growth by advancing transit-oriented mixed-use developments. The forum focused upon the creation of “market-rate housing” along the South Shore Line and mixed-use residential, commercial, and recreational neighborhoods in the West Lake Corridor that links the region to Chicago. Among the speakers were former Pittsburgh mayor, Tom Murphy, and former Orland Park mayor, Dan McLaughlin, who shared their successes in building transit-oriented developments.

FLORIDA—PSTA Proposes New Zoning for SunRunner TOD, for Increased Density
Veronica Brezina, St. Pete Catalyst, February 26, 2022
The Pinellas Suncoast Transit Authority is preparing to launch their first Bus Rapid Transit (BRT) project in the Tampa Bay region. The $44 million SunRunner project will have 32 stations and run along a 10.3-mile route. It will provide service through St. Petersburg, South Pasadena, and St. Pete Beach on semi-dedicated lanes, and will allow for retail and affordable housing development along the route. The transit-oriented development region is classified into neighborhood, ‘village,’ ‘urban’ and downtown areas, each in support of new zoning laws with a goal of maximizing density. The development is expected to meet between 60 and 80 percent of the area’s projected residential demand over the next 30 years.

CANADA—Massive redevelopment proposed for the core of Brentwood Town Centre
Kenneth Chan, Urbanized, March 4, 2022
Bosa Development and the City of Burnaby are currently holding public consultation on the site master plan for Brentwood West, which is a four-tower, mixed-use redevelopment proposal. The project, which comprises one of Metro Vancouver’s future tallest towers, will replace the existing Petro Canada gas station, west of SkyTrain Brentwood Town Center Station. In total, 1,427 homes, including 935 condominium units, 492 rental units, 156 affordable rental units, 285 market rental units, and 51 CMHC median market-rate units will be constructed. The development will include an area of 650,000 sq. ft. and include office, retail and restaurant space on the lower floors of the three towers facing Willingdon Avenue. 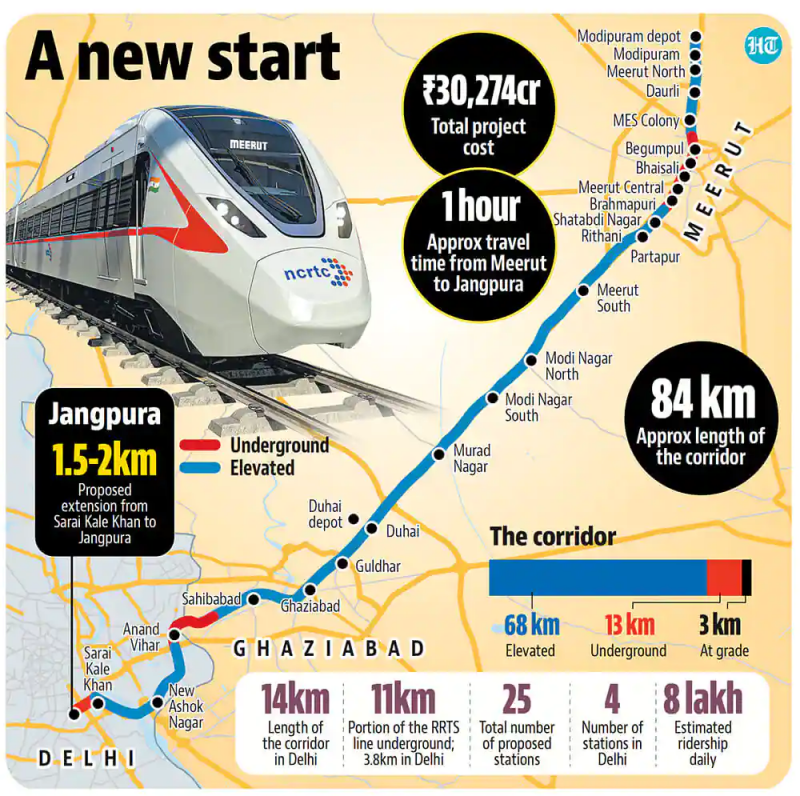 INDIA—Jangpura Station to be Built as Transit Hub on Delhi-Meerut RRTS Line
Risha Chitlangia, Hindustan Times, February 28, 2022
The National Capital Region Transport Corporation (NCRTC) in Delhi, India, is developing the Janpura Station along the Delhi-Meerut Regional Rapid Transit System (RRTS) corridor as a transport hub. The Delhi-Meerut corridor is the first of the three RRTS corridors the NCRTC plans. Spread across a 12-hectare area, the Jangpura Station hub will provide a direct rapid rail link to South Delhi and allow for residential, commercial, and other development. The NCRTC seeks to ensure accessibility through last mile connectivity and improve pedestrian friendly zones.