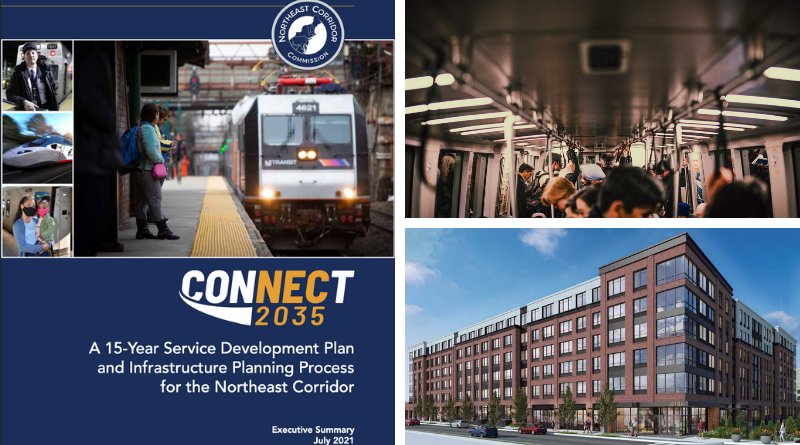 Downtown Buffalo will soon be home to a new affordable housing development built in concert with a grocery store and mobility hub, providing new amenities to the neighborhood. The former 400-space parking lot, close to the Church Metro Rail Station and seven bus lines, will feature bikesharing and carsharing services. A Guaranteed Ride Home Program for tenants and supermarket employees will provide a timely, reliable means home in the event of an emergency. A dedicated transportation coordinator will be available to help people understand and plan their mobility needs beyond the use of a single-occupant vehicle.

Covid Didn’t Kill Cities. Why Was That Prophecy So Alluring?
Emily Badger, The New York Times, July 12, 2021
The New York Times Upshot column convenes a group of urban scholars to discuss the prevailing pandemic narrative of collapsing cities. As Eric Klinenberg, a professor of Sociology at NYU writes, “Anti-urbanism is an American religion, practiced widely and frequently in ordinary times, and passionately when cities are actually in trouble.” The narrative of people fleeing cities during the pandemic was exaggerated, with many moving to peripheral towns in the same metropolitan area, or to other, growing urban centers, such as Seattle or Austin.

Transit Systems Dangle Discounts, New Tech as They Try to Turn the Corner on the Pandemic
Olivia Olander, NBC News, July 10, 2021
Public transit providers are deploying a variety of methods to encourage riders to return, such as increased service levels (MTA Metro-North line and WMATA) and a dramatic bus route redesign (Cleveland). Other changes include reduced fares. San Francisco’s BART system plans to discount fares by half during the month of September. Richmond’s public transportation agency approved free fares through June 2022, and, in a move for more equitable transit access, is looking for state funding to make the change permanent.

NEWARK—Somerset Brownstones, a 60-unit Affordable Housing Development, Opens in Newark
ROI-NJ, July 15, 2021
Newark Mayor Ras Baraka attended the opening of a new 60-unit affordable housing complex in Newark. The $21 million project was financed through Low Income Housing Tax Credits (LIHTC), funds from the Affordable Housing Program of the Federal Home Loan Bank of New York, and gap financing from the City of Newark’s HOME funds. The development is adjacent to the NJ TRANSIT 5 bus line to Newark Penn Station, and within walking distance of the 27, 39, 59, 65, and 66 bus lines at Clifton Avenue.

WOODBRIDGE—4 Developers Are Finalists for MetroPark Development Plan
Carly Baldwin, Patch, July 15, 2021
The Mayor of Woodbridge, where NJ TRANSIT MetroPark Station is located, announced that four developers had been chosen as finalists to redevelop what is currently an office and parking-lot heavy area adjacent to the express stop. The plan is to increase the supply of housing and ground-floor retail at MetroPark, one of the busiest stations in the NJ TRANSIT system due to its status as an express stop for both commuter and Amtrak trains, nearby office space, and proximity to the Garden State Parkway.

NEWARK—Residential Project Might Come to Newark’s Lower Broadway Neighborhood
Jared Kofsky, Jersey Digs, July 13, 2021
Developer Clark Street Apartments LLC has filed an application with the Newark Zoning Board of Adjustment (ZBA) to construct a 5-story, 16-unit apartment in the Lower Broadway neighborhood. The complex would be located a 10-minute walk from Newark Broad Street Station. The immediate area is currently served by NJ TRANSIT 11, 13, 27, 28, 29, and 72 bus routes.

GLEN RIDGE—Transit-Friendly Glen Ridge Apartments Will Have Movie Theater, Billiards Room
Julia Martin, NorthJersey.com, July 12, 2021
Construction on JMF Properties’ Clarus Glen Ridge development, located close to Bay Street Station on the Montclair-Boonton Line, was recently completed. The building contains 110 apartment units, with 17 designated as affordable housing. The complex was constructed on the former site of four homes—in an area deemed in need of development—and financed using a Payment In Lieu of Taxes (PILOT) agreement with the Borough of Glen Ridge.

JERSEY CITY—Jersey City Approves 337-Unit Project along West Side’s Fisk Street
Chris Fry, Jersey Digs, July 12, 2021
Halpern Real Estate Ventures received approval from the Jersey City Planning Board to move forward with a two-phase development project, the first of which will include 337 housing units in a six-story structure. Located in the West Side of Jersey City, the project is within walking distance of the area’s Hudson-Bergen Light Rail Station.

Report Outlines How Public Transit Agencies Can Advance Equity
UT News, July 15, 2021
A new study written by researchers at the University of Texas at Austin, and published in the Transportation Research Record, contributes six practices by which transit providers can work to achieve equity in their systems and organizations. The authors based their findings off research and interviews with eight public transit agencies, including Boston’s MBTA, Austin’s Capital Metro, and Portland’s TriMet.

How to Get Racial Equity into Biden’s Infrastructure Plan
Melissa Jones and Vinita Goyal, Shelterforce, July 1, 2021
After the announcement of a $3.8 trillion infrastructure proposal by the Biden administration, two equity advocates write that the infrastructure plan should prioritize investments in community-based coalitions that exist at an ideal scale to improve people’s lives. President Biden’s proposal, they write, should build on past successes such as the federal Community Development Block Grant bill, and the Community Reinvestment Act, which created dedicated funding streams for community-determined initiatives.

$117B ‘CONNECT NEC 2035’ Plan Unveiled
William C. Vantuono, Railway Age, July 14, 2021
The Northeast Corridor Commission, a coalition of states, the federal government, and Amtrak, released the CONNECT NEC 2035 15-year plan of maintenance and expansion for rail transit in the region. For the New York City metro area, improvements to the NEC infrastructure will include an expanded Secaucus Station as part of the Gateway Program, allowing for a one-seat ride on the Main, Pascack Valley, and Bergen County lines. Much-needed maintenance, such as the East River Tunnel Rehabilitation and an upgraded Harold Interlocking, which sorts NJ TRANSIT, Amtrak, and LIRR trains in Queens, will contribute to considerable operational improvements.

ILLINOIS—With New Details Emerging, State Funding for One Central Makes Even Less Sense
David Zegeye, Streetsblog Chicago, July 13, 2021
One Central is a megadevelopment, proposed for the Near South Side of Chicago, that will include nine skyscrapers built over commuter rail tracks, reconnecting the neighborhood with the lake and amenities such as Soldier Field. The project would also boost transit connectivity, creating a hub for Amtrak, the Metra commuter rail, and a new branch of the ‘L’ rapid transit system. Still, some are concerned about the specifics of the project, whether the debt-burdened State of Illinois should add to its obligations, and whether the project adequately considers the existing needs of residents.

GEORGIA—Housing Lots Near MARTA Stations Could Be Developed with Condos, Under ATL Plan
David Pendered, SaportaReport, July 11, 2021
The City of Atlanta is considering a measure to increase residential density in areas adjacent to transit stations. While not a rezoning measure, the move would create a legal basis for further changes by making changes to land use designations, such as shifting from low density residential to medium density residential, which includes apartments, condos, and lofts, as well as duplexes, triplexes, and townhomes.

It’s Time for Economic Developers to Focus on Transportation
David Zipper, Bloomberg CityLab, July 1, 2021
David Zipper, a Visiting Fellow at the Harvard Kennedy School, argues that poorly developed transit systems hamper the ability for workers to reach employers, and poor transit can hurt productivity. Projects that improve commutes, such as new rail or BRT routes, can serve as economic development opportunities. The blind spot, the author writes, is that transportation is not often considered within an economic development lens.

FRANCE—Former Parisian Railway Station Turned into Housing and Live-Work Units
Alyn Griffiths, Dezeen, July 15, 2021
Development recently concluded on two 105-unit towers in the 18th arrondissement of Paris, on the former site of a train station. The two buildings are set on a podium, and have live-work spaces between them. The block-length development is located close to the Port de la Chapelle Métro Station.

Metropolitan Manila has a 7-million-unit deficit of affordable housing and is expected to need up to 20 million new units by 2040. To help meet this demand, a group of private housing developers, the Chamber of Real Estate & Builder’s Associations, Inc. (Creba), lobbied the country’s Department of Transportation (DOTr) to include affordable housing in the transit-oriented developments that are being planned. If DOTr were to require that 10 percent of the new units in the six Phase 1 TOD areas be designated as affordable, the construction could contribute 37,000 new units—perhaps the beginning of a new affordable TOD trend in the Philippines.