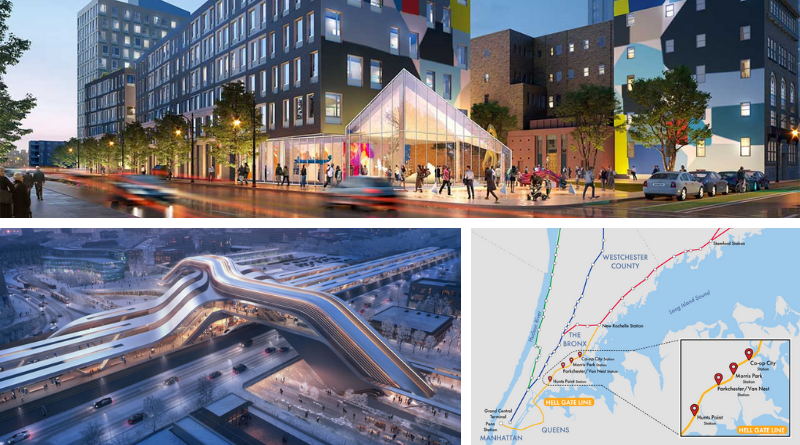 The Passaic County Planning Board will soon consider the construction of a light rail link that would connect Newark to Paterson along an existing rail right-of-way. The $1.1 billion project would run from St. Joseph’s University Medical Center in Paterson, to Clifton, Belleville, and Nutley before terminating at Newark Penn Station. According to a technical study by the North Jersey Transportation Planning Authority, more than 30 percent of residents in Newark and Paterson do not own automobiles, and high demand exists for a more efficient transit connection between the two cities.

The Downtown Office District Was Vulnerable, Even Before Covid
Emily Badger and Quoctrung Bul, The New York Times, July 7, 2021
A New York Times analysis found that office space in downtowns in cities such as Boston, San Francisco, and Washington accounts for more than 70 percent of all real estate, and in some cities, such as Philadelphia, St. Paul, and Austin, office space occupies only a little over 40 percent of all real estate. The lesson for land use, in central business districts that may never entirely recover their commuter populations, is that a diversity of uses can build resilience.

Why NY, NJ and CT Are Warring Over How to Split $14B in Transit Aid (and It’s Been Months)
Colleen Wilson, NorthJersey.com, July 2, 2021
NJ TRANSIT, the Connecticut Department of Transportation, and New York’s Metropolitan Transportation Authority are currently at odds over $14.2 billion in federal COVID-19 stimulus funds. While Connecticut and New Jersey are in agreement over the disbursal (and adhere to FTA guidance), New York argues that it should receive $687 million more—the lion’s share of which would be taken from NJ TRANSIT’s allotment. The three state agencies had previously used the FTA methodology to split last year’s CARES Act funding.

NEWARK—First Renderings Released of Newark’s Proposed 250-Unit ‘Museum Parc’ Project
Jared Kofsky, Jersey Digs, July 7, 2021
“Museum Parc” is a proposed two-building expansion for the Newark Museum of Art, comprising new gallery space and 250 new apartments, distributed over two buildings. Project documents indicate that affordable housing would be a component, but do not provide an exact allocation.
The development would be located two-blocks from the NJ TRANSIT Broad Street Station.

HOBOKEN—New Renderings Emerge as 357-Unit Project Heads to Hoboken’s Planning Board
Chris Fry, Jersey Digs, July 6, 2021
The Hoboken Planning Board is considering a 357-unit development that, if built, would be located near the soon-to-be-completed Northwest Park, and the 9th Street Station of the Hudson-Bergen Light Rail. Developer Pegasus will reserve 20 units on-site for affordable housing, and contribute funds in support of 17 additional units for homeless veterans housing at American Legion Post 107 on Second Street in central Hoboken.

Can Public-Private Collaboration Boost Transport Equity?
Christopher Carey, Cities Today, July 1, 2021
A roundtable convened by Cities Today brought together transportation leaders from Charlotte, Columbus, and the private sector to discuss how shifting away from traditional commutes and modes could boost transit use and access. Transit providers are increasingly looking to multi-modal options as complements, rather than competitors, to rail and bus service, and turning to micro-mobility investments, such as e-bikes and scooters, to increase network coverage.

NEW YORK—Mission Accomplished: 1585 Hertel Avenue
Buffalo Rising, July 8, 2021
On the site of a former brownfield, a mixed-use redevelopment offering housing and ground-floor retail has opened to residents in North Buffalo. The work of a consortium of local and state agencies, the project, 1585 Hertel Avenue, includes 34 affordable apartments, and two retail tenants to date, a bridal shop and fitness center. The Niagara Frontier Transportation Authority (NFTA) 23 bus serves the project, and offers frequent connections to MetroRail stations and downtown Buffalo.

CALIFORNIA—Milpitas Planning Commission Narrowly Supports 84 Below-Market-Rate Apartments
Joseph Geha, Silicon Valley News, July 8, 2021
The Milpitas Planning Commission has approved an 84-unit affordable housing complex, to be built near the city’s BART station. Planning commissioners differed over the reduction of parking minimums for the project, an action that implements a state law designed to incentivize the construction of affordable housing. Developer Pacific West Communities will utilize modular construction, building the apartments separately and then installing them by crane.

PENNSYLVANIA—Knockout: Philly Design Board Approves Plan for Housing at Blue Horizon Boxing Site
Ryan Briggs, WHYY, July 7, 2021
A storied event venue, known for its boxing matches, will be renovated to include a 13-story tower with 208 housing units. While the boxing ring will be demolished, the project preserves the facades of the historic mansions in front. The redevelopment is located close to Girard Station on the SEPTA Broad Street line.

PENNSYLVANIA—The Julian May Be Headed to Oakland. And No, it’s Not a Cocktail or a Celebrity
Mark Belko, Pittsburgh Post-Gazette, July 7, 2021
The Julian is a 148-unit apartment complex proposed by developer Hudson companies for North Oakland, a community to the west of Pittsburgh. To offset concerns about increased traffic congestion, the developer cited significant public transit use and active transportation by residents. Nearby to the new development is the future alignment of Pittsburgh’s Bus Rapid Transit (BRT) system expansion.

NEW YORK—Bronx Residents—And a Developer—Weigh In on What Future Metro-North Stations Might Bring
Griffin Kelly, City Limits, July 1, 2021
The Metro-North Penn Station Access project will create four infill stations along an Amtrak right-of-way, providing new transit options for historically underserved areas of the Bronx. New York City MTA planners have engaged with the community at outreach events in the area, seeking input on future development near the four new rail stations. Though residents were enthusiastic about the new service, there was widespread concern about inequitable development. One measure that the City’s Department of City Planning said it would employ is mandating inclusionary housing for new development in the area.

ESTONIA—Study Launched to Find Station Transformation Solutions for Rail Baltica
Global Railway Review, July 9, 2021
An effort to connect Eastern European countries situated around the Baltic Sea, Rail Baltica aims to join Estonia, Latvia, and Lithuania, to Finland, Poland, and the rest of the continent’s rail network. Rail Baltica Joint Venture is working with an international consortium to study long-term development opportunities at the seven new international station areas that will be created.

INDIA—Indian Railways’ Station Redevelopment Plans Fail to Take Off
Srinand Ja, International Rail Journal, July 2, 2021
A plan by Indian Railways to use Public Private Partnerships (P3) to redevelop 403 stations under a revenue-sharing model has gained little traction since it commenced in 2014. Some planned projects have been cancelled due to cost escalations, and, thus far, only one redevelopment, at Habibganj Station, stands out as a success.