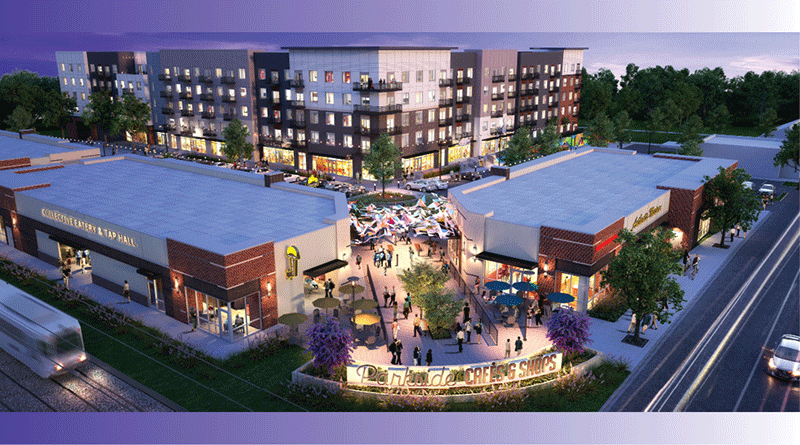 Camden’s Walter Rand Transportation Hub Will Receive $7 Million Grant. A Walkway Will Be Built Over MLK Blvd.
Carly Wanna, The Philadelphia Inquirer, July 12, 2019
The Camden County Board of Freeholders recently voted to accept a $7 million grant from NJ TRANSIT. This is the first investment for the construction of the Walter Rand Transportation Center. NJ TRANSIT’s grant will fund a pedestrian bridge that will span across the six-lane street adjacent to the center, Martin Luther King Boulevard. The new pedestrian bridge will link the transit center building to Broadway. Construction is set to begin in 2021.

Five-Story, Transit-Oriented Development Breaks Ground in Jersey City
Linda Lindner, NJBiz, July 17, 2019
Construction began on a 10-unit, mixed use development project designed by Studio ST Architects. The five-story project is located at 36 Jones Street in Jersey City and is adjacent to public transportation options. The project is anticipated to open in mid-2020.

NJ Transit Will Spend $3.8B Over the Next Year. What will it buy commuters?
Larry Higgs, NJ.com, July 17, 2019
On Wednesday, NJ TRANSIT’s board of directors approved a $3.8 billion budget for fiscal year 2020 to include a $1.4 billion capital projects spending plan and $2.39 billion for operations. Furthermore, Governor Murphy and State Legislators agreed on an additional $50 million in state subsidies as part of a pledge to avoid increasing fares. Among other improvements and upgrades for NJ TRANSIT, the budget funds the purchase of 17 new dual-mode locomotives and 113 electric-powered, multi-level rail cars.

Some Funds For Route 440 Pedestrian Walkway Put On Hold
Rory Pasquariello, Hudson Reporter, July 17, 2018
Governor Phil Murphy is withholding $250,000 in NJ Department of Transportation (NJDOT) funds dedicated for a planned pedestrian walkway over Route 440 near the 34th Street Light Rail Station in Bayonne. The pedestrian walkway is a key component in redevelopment near the station and in the area that formerly housed the Military Ocean Terminal. This fall, NJ TRANSIT is expected to designate a developer to build on the site of the station’s commuter parking lot. Bayonne officials say that the planning process for the project will continue to move forward.

RTA Updates Its Transit Plan For Southeast Michigan
Aaron Mondry, Curbed Detroit, July 15, 2019
The Regional Transit Authority (RTA) recently revealed its updated plan for Southeast Michigan. The 2020 regional plan calls for an expansion of the express service along main corridors originating from downtown Detroit and active commuter service during rush hour for 13 regional routes. The plan also calls for a commuter rail service connecting Ann Arbor and Detroit, an airport express line, and bus rapid transit running down Woodward Avenue. Funding for the plan will likely be on the 2020 ballot after a funding ballot for a similar plan was voted down in 2016.

Staten Island Pols Call For Microtransit Pilot Program
Zoe Rosenberg, Curbed New York, July 15, 2019
Led by Congressman Max Rose, Staten Island politicians are calling on Governor Andrew Cuomo to implement a microtransit pilot program in the borough. The microtransit pilot program would introduce options such as dockless bike-share to help ease commutes in the borough by increasing transportation options in areas where public transit is absent and spread out. The pilot program would aim to reduce the large percentage of Staten Island commuters who skip public transit altogether for single-occupancy vehicles due to a lack of first mile/last mile connections.

Pace’s Pulse Service Aims To Change Public Transit
Vince Gerasole, CBS Chicago, July 15, 2019
Pace aims to change public transit for the Northwest Side of Chicago and surrounding suburbs through the implementation of their new Pulse Line Service. Similar to a train station, the Pulse Line will utilize actual heated stations with raised platforms. The buses will be equipped with a transit signal priority system, meaning that if there is a light ahead, the technology will signal to extend green lights slightly to allow the bus to go through. The Pulse service will run along Milwaukee Avenue to replace Pace’s current Route 270.

Santa Maria Offers Free Bus Passes to Students
Kasey Bubnash, Santa Maria Sun, July 17, 2019
As of Monday, the City of Santa Maria began accepting applications for its new program, Youth Adventure Passes. Youth Adventure Passes allows qualifying students the option to apply for one of 1,129 free monthly bus passes through the City. The idea for the program was conceived of by a group of high school students who noticed the unmet transportation needs of their peers who reside outside of the school district’s bus zones. Qualifying students must identify the need for a free bus pass, have completed the sixth grade, be under the age of 18, and have a parent or guardian’s permission.

Manchester Metrolink Gets Contactless Payments Technology
Karl Flinders, Computer Weekly, July 16, 2019
Transport for Greater Manchester (TfGM) recently integrated new contactless payments infrastructure into its tram network. Manchester tram riders are now able to use their contactless bank cards to tap for fare payment as they enter and exit the network for a more seamless experience. A study conducted by Visa found that approximately half of UK commuters noted contactless payments as the single most significant improvement to their public transportation experience.

3 Towers With 600 Rental Homes Proposed Next to Marine Drive Station in Vancouver
Kenneth Chan, Daily Hive, July 16, 2019
Ashley-Mar Housing Co-Operative and Intracorp Homes have entered into a partnership for a development project at 8495 Cambie Street in South Vancouver. The site is immediately adjacent to the Canada Line’s Marine Drive Station. The proposed project, Marine Gateway, would replace an existing 54-unit townhome complex currently owned by the co-op with a new mixed-housing complex focused on rental units.

Baltic Triangle Train Station Moves One Step Closer
Elliot Jessett, The Baltic Triangle, July 18, 2019
The Liverpool City Region has published its Combined Authority Transport Plan (CATP). The CATP features a multitude of potential projects that would improve infrastructure and address regional challenges and priorities over the next few years. Part of the CATP’s long-term rail strategy involves the potential for redeveloping and re-opening the St. James Station in the Baltic Triangle. With the Baltic Triangle’s increasing social and economic growth, reopening the station is crucial to optimizing transport infrastructure in the city.