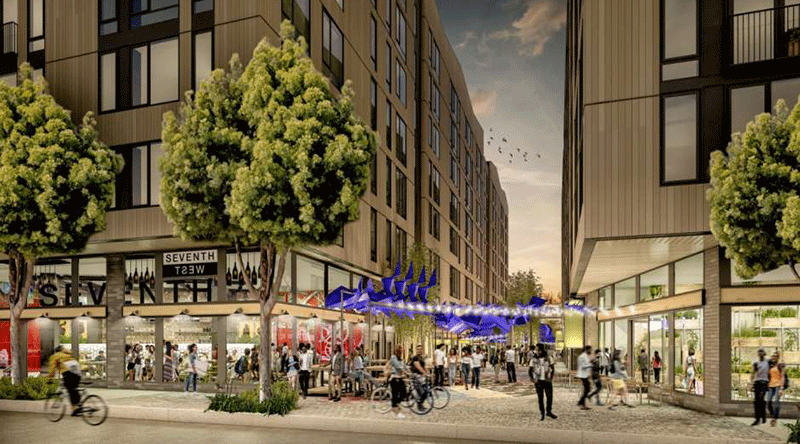 On the Road Towards Electrifying NJ Ports
Insider NJ, June 4, 2019
The New Jersey Department of Environmental Protection (NJDEP) has announced it is seeking approval for a second round of funding from the Volkswagen Environmental Mitigation Trustee for the disbursement of $16 million. The funding would be used for the deployment of electric heavy-duty garbage trucks, school buses and port-related vehicles as a way of helping to improve air quality in port communities such as Jersey City, Newark and Elizabeth.

Hoboken Rolling Out New Fines for E-Scooter Riders Who Break the Rules
Corey W. McDonald, The Jersey Journal, June 5, 2019
With the legalization of e-scooters in New Jersey comes challenges for cities such as Hoboken who choose to allow for this alternative mode of transportation. Hoboken currently has 300 electric scooters in operation with over 21,000 rides reported in their introductory week alone. On June 5, following a wave of complaints on scooter violations, the City Council of Hoboken introduced an ordinance establishing rules for e-scooter use. The city will fine riders who break the rules, and after the fourth offense will suspend these riders from using any city-sponsored scooter.

NJ TRANSIT Takes a Small Step Toward Getting its Own Fare Card, Similar to NYC
Larry Higgs, NJ Advance Media for NJ.com, June 6, 2019
The NYC MTA launched its One Metro New York (OMNY) program in May 2019, allowing rider payments through digital technology, and New Jersey is not far behind. NJ TRANSIT is piloting test readers on six bus routes in Morris County as the first step toward allowing riders to pay by tapping a card or mobile ticket on a smartphone. The pilot program is part of a larger effort to revamp the payment system, including the development of an NJ TRANSIT fare card.

New Jersey Partnership Aims to Create EV Infrastructure
Melina Druga, Transportation Today, June 6, 2019
A newly launched partnership among state departments and agencies aims to advance the necessary infrastructure to support electric vehicles (EV). The multi-agency New Jersey Partnership to Plug-In initiative is led by the NJ Board of Public Utilities, the NJ Department of Environmental Protection, and the NJ Economic Development Authority. The agencies will work together and with the private sector to deploy several critical aspects of EV infrastructure to meet the state goal of registering 330,000 electric vehicles by 2025.

This Is the Prettiest Block in New York, and It’s Just Been Perfectly Restored: Station Square tells a story of a neighborhood.
By Justin Davidson, New York Magazine, June 3, 2019
Station Square, a planned plaza in Forest Hills, New York, has just reopened to pedestrians after being closed off for years. The train station plaza opened back in 1912 and was developed purposely to be a serene place where Midtown commuters could unwind after their hectic work days in the ever bustling Manhattan. Although the Square is aesthetically pleasing, it is much more than visually attractive; Station Square highlights how TOD-like projects helped to modernize New York.

Coming Soon: Paying via Smartphone App to Ride Public Transit in Allegheny County
Bill O’Toole, Next Pittsburgh, June 5, 2019
The Port Authority of Allegheny County officially approved a three-year contract with a London-based software company to improve and upgrade its ticketing system for public transportation. With the new system in place, riders will be able to pay via smartphone. The $2.85 million effort aims to create an easier, more convenient and more user-friendly public transit experience for riders.

AvalonBay Starts Development of Mixed-Use Project in New York
Gail Kalinoski, Multi-Housing News, June 6, 2019
Following a seven-year process, AvalonBay Communities broke ground on the construction of a new mixed-use development project, Avalon Harrison, on a site next to the Metro-North Commuter Railroad Station in Harrison, NY. The project will be the first green, suburban TOD project for the rail system. Avalon Harrison plans to increase parking by 85 percent at the station by using structured parking (a parking garage, often incorporated into a building) to be shared by commuters and residents. The project will add 143 new residential units, including seven affordable apartments, as well as new shopping options in the downtown.

West Oakland Readies for Massive, Transit-Oriented Apartment Complex
Sara Ravani, San Francisco Chronicle, June 6, 2019
The Oakland Planning Commission will consider a large development project near the West Oakland BART Station. If approved, the project, planned by Panoramic Interests owner Patrick Kennedy, would create over 1,000 apartments and 59 parking spaces as well as retail space, office space, and parks. The aim of the new TOD project is to revive a once thriving jazz and blues scene and create a more walkable, people-oriented, car-less community where residents utilize alternative modes of transportation including BART, bikes, ZipCar, Uber and Lyft.

Singapore Aims to Shrink Commutes With 2040 Transport Plan
Keith Barrow, International Railway Journal, June 3, 2019
Singapore is exploring how to improve user-convenience and increase the coverage by public transit through their 20-year Master Plan. In May, the Land Transport Authority (LTA) announced the Land Transport Master Plan (LTMP) 2040. The intention of the plan is to create a “45-minute city with 20-minute towns” through the expansion of the rail network and the addition of new stations built along existing lines.

May 20, 2009 Steph_Admin Comments Off on Former Hive of Industry, Harrison Redevelops with Transit