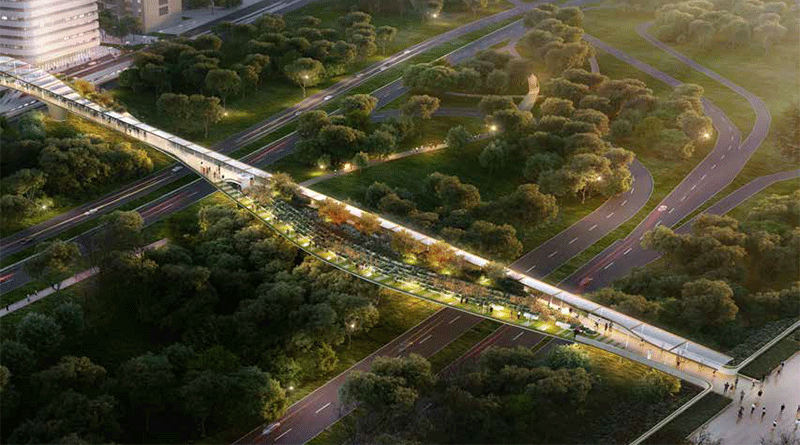 13-Story Building Could Bring 100+ Units to Journal Square
Jared Kofsky, Jersey Digs, November 12, 2018
A 13-story mixed use development has been proposed for 345 Baldwin Avenue in Jersey City, a half-mile from PATH’s Journal Square Station. The new proposal, along with the multitude of high-rises directly around the train station, is part of the Journal Square 2060 Redevelopment Plan that calls for TOD in and around Jersey City’s Central Business District. The developer, 345 Baldwin, LLC, is requesting a deviation from the maximum height requirement allowed by the Plan, which may allowed if the development faces undue hardship under height constraints, or if the proposed building height would help advance the purposes of the Plan.

Cherry Hill’s Little-Known Train Stop Seen as a Potentially Big Link to Philly
Jason Laughlin, The Inquirer, November 13, 2018
South Jersey’s Cherry Hill has published a new master plan, calling for development around its station on NJ TRANSIT’s Atlantic City Line. The station has been shut down since September for Positive Train Control installation, but after it reopens, Cherry Hill planners would like to see commuters to Philly choose the Atlantic City Line, which feeds directly into Philadelphia’s 30th Street Station, over the PATCO system.

South Amboy Ferry Service to Manhattan One Step Closer to Fruition
Susan Loyer, Bridgewater Courier News, November 14, 2018
The City of South Amboy has approved an engineering and design proposal for its Passenger Ferry Terminal Project, furthering the progress of its Intermodal Transit Village effort. The project will provide a 40-minute ride that initiates at Main Street, with easy access from the South Amboy NJ Transit Rail Station, and travel to Wall Street and Midtown Manhattan. The cost of the work will be split between the city and state, but stages leading up to the final infrastructure phase have been funded by federal grant money as a part of NJDOT’s Transit Village Initiative.

Housing market in this Hudson County community is sizzling
Aya Elamroussi, The Jersey Journal, November 15, 2018
Pure Properties, a real estate agency based in Jersey City and New York, has released a report indicating the sale price of homes in Bayonne, NJ has risen 19 percent between the second and third quarter of 2018. The demand for residency in Bayonne, which lies at the southern end of the Hudson-Bergen Light Rail, has increased substantially due to its family-friendly atmosphere combined with its proximity to New York City.

Mayor: Eliminate Parking for New Housing Near Transit to Lower Cost
Chris Jennewein, Times of San Diego, November 9, 2018
San Diego’s mayor, backed by a public transit advocacy group, has proposed a reform to the building code to allow for construction of housing without parking spaces within the city’s “transit priority area.” If the reform is approved by City Council, it could bring construction costs down by hundreds of thousands of dollars and pave the way for more affordable housing, while meeting San Diego’s transit goals laid out in its 2050 Regional Transportation Plan.

Town Seeks Ideas for Downtown Central Islip
David Winzelberg, Long Island Business News, November 9, 2018
Central Islip has received a Downtown Revitalization Grant from the State of New York and is seeking proposals for redevelopment of the downtown area. The town’s location in a federal Opportunity Zone provides additional incentives for developers to get involved in the revitalization process and focus on TOD projects, especially around the town’s Long Island Railroad station.

$4.5 Million in Grants Support Affordable Housing Development
Insight News – North Minneapolis, MN, November 12, 2018
The Metropolitan Council of the Twin Cities area has approved $4.5 million in Livable Communities grants for TOD affordable housing projects in the region. The grants are dispersed among train and bus stations in urban and suburban Minneapolis and St. Paul, with additional plans for mixed use development and public space improvements.

What Does the Future Hold for Australia’s Railway Stations?
Joe Baker, Railway Technology, November 13, 2018
Design and consultancy firm Arcadis has conducted a mobility oriented development study of 27 major worldwide rail stations, and 3 of the 4 Australian stations studied were among the seven lowest-ranked stations. The low rankings were due mostly to a lack of connectivity, but public amenities, facilities, and business employment also factored in. Australian governments have a number of projects in progress to increase system connectivity and redevelop the communities around the stations.

Amazon Could Be Boon or Bust for Metro and the Region’s Transportation Infrastructure
Faiz Siddiqui, Washington Post, November 13, 2018
Amazon’s award of half its new HQ2 to Arlington, VA, has opened the discussion about transportation improvements in the DC Metro area. With the new HQ will likely come an influx of riders to the WMATA system and a need for additional infrastructure, such as a pedestrian bridge between Crystal City and the airport and second entrances to local Metro stations. Amazon’s history of providing transit incentives to its workers bodes well for increased population around DC area transit nodes and higher ridership, but also has the potential to further burden a system already undergoing major maintenance.