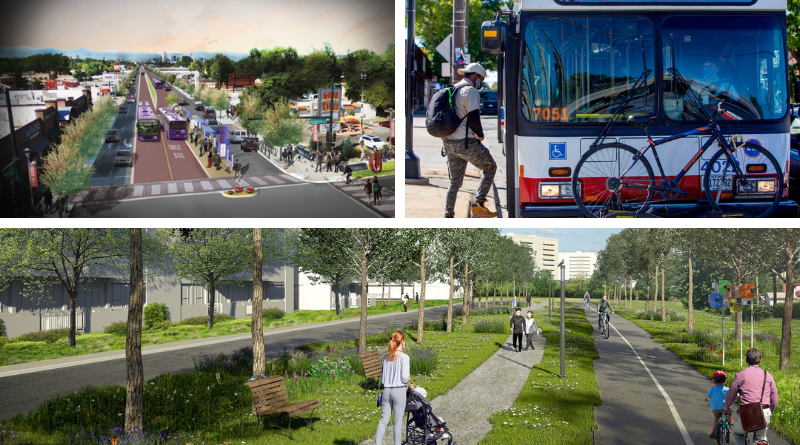 ILLINOIS—Moving Equitable Development to the Front of the Bus: ETOD as Policy in Chicago
Roberto Requejo, The Chicago Community Trust, September 14, 2022
Elevated Chicago Executive Director Roberto Requejo discusses the work of the coalition starting with his own TOD story. Formed in 2017, Elevated Chicago helps the city chart a more equitable path toward growth using an equitable transit-oriented development (eTOD) model. The coalition invested $10 million in community-led development connected to CTA stations and leveraged this investment to secure an additional $10 million in American Recovery Plan funds. Their advocacy led to a commitment from the Chicago Department of Housing to invest $800 million in affordable homes near transit in 2021 and the adoption of the city’s first eTOD ordinance, Connected Communities, in July 2022.

CALIFORNIA—A Transit Ridership Role Reversal in California
James Brasuell, Planetizen, September 14, 2022
In a major reversal in West Coast transit markets, more transit trips (on a per capita basis) have been taken by riders in the Los Angeles area than in the San Francisco Bay area for the first time in decades. COVID-19 has severely disrupted the travel behaviors of white-collar Bay Area commuters. LA Metro and other area providers, however, have promoted bus service—yielding one of the better ridership recoveries in the nation. Once regarded as the car capital of California, the Los Angeles area hints at a better way forward for Sunbelt cities looking to build up transit ridership in a post-pandemic world.

Return-to-Office Push Does Little to Solve Transit Agency Problems
Marvis Gutierrez and Mackenzie Hawkins, Bloomberg, September 14, 2022
Steady commitments to in-person work have not moved the financial needle for fare dependent transit services, presenting credit woes for New York City’s Metropolitan Transportation Authority (MTA). Before the pandemic, fare-based sources of transit funding were seen to be a reliable income source for lenders, but the effects of COVID-19 on ridership have reversed that paradigm in favor of tax-based systems such as that used by the Utah Transit Authority. Finding alternative sources of revenue will likely prove to be a critical economic sustainability challenge for American transit agencies in the 21st century.

NEW YORK—Op-Ed | Reviving NYC: Modernizing Our Transit System Is Crucial
Kathryn Wylde, Bronx Times, September 14, 2022
According to CEO of the Partnership for New York City, Kathryn Wylde, modernizing New York City’s transit system means embracing the multi-modal advantages of its success with Citi-Bike. NYC’s Citi Bike has come out of the COVID-19 pandemic as the largest bike share program outside of Asia and demonstrates how establishing a cycling culture can provide increasingly flexible intermodal access to commuters and residents alike. Wylde also lauds congestion pricing and advocates for additional measures to calm NYC streets, such as restricting tourist buses and accommodating curbs for freight, to thoughtfully accommodate post-pandemic travel.

Essex-Hudson Greenway Advocates Laud NJ Purchase of Abandoned Rail Line to Create 9-Mile Park
Ron Zeitlinger, NJ.com, September 16, 2022
Residents of two of the nation’s most densely settled counties may soon have access to a 9-mile recreational trail linking Montclair through Newark to Jersey City. Governor Phil Murphy announced this week that the State had completed the purchase of the abandoned Boonton rail line from Norfolk Southern. Close to 100 feet wide in some areas, the new multiuser trail will offer off-road transportation and recreation.

NEWARK—NJ Transit Bus Route Redesign is Late in One City, but Improvements Are on the Road
Larry Higgs, NJ.com, September 14, 2022
As NJ TRANSIT rolls out bus route redesigns to expand and improve bus services, updates to the New Bus Newark route have trailed behind. NJ TRANSIT has made improvements to bus routes, independent of New Bus Newark, due to their relevance to other projects. NJ TRANSIT has attributed the delay to a need to refine the recommendations to fit the context of available resources and operator availability. Additionally, COVID-19 limited possible outreach methods for the Newark project, contributing to a delay in gathering appropriate rider feedback before the official announcement of the final redesign recommendations.

Finding a Transit-Friendly E-Bike
John Boyle, Bicycle Coalition of Greater Philadelphia, September 12, 2022
The consistent evolution of e-bikes into more portable and lighter weight formats prompts consideration of how cyclists can incorporate them into their transit trips in this region. NJ TRANSIT stations are all e-bike accessible—unlike most SEPTA stations—but restrictions to non-folding e-bikes on the Northeast Corridor illustrates that, at present, the most desirable device has not quite proliferated yet—a folding, lightweight e-bike. Lighter batteries could not only revolutionize EVs but change the first-mile/last-mile potential of e-bikes in relation to station access in New Jersey.

NEW YORK—Opinion: To Lower Housing Production Costs, Put People Before Parking
James Lloyd, City Limits, September 14, 2022
Director of Policy for the New York State Association for Affordable Housing, James Lloyd, argues for ending parking mandates to help address a housing shortage that stands at 342,000 units in the NYC metro area. Lloyd compares the estimated cost of required parking spots to the subsidized costs of adding new housing units and found a near perfect match—$120,000 to $122,000. Making moral appeals against prioritizing parking over people, Lloyd asks for the removal of off-street and garage parking requirements by saying these cost comparisons mean that every NYC parking spot built could have housed a family.

HAWAII—Lahaina Teacher Housing and Pu’u Kukui Elementary Land Acquisition Included in CIPs
Wendy Osher, MauiNow, September 13, 2022
The new Maui County Capital Improvement Projects plan will spend $15 million to design and construct teacher housing, part of an effort to attract and retain quality teachers. As a part of Hawaii’s Statewide Transit-Oriented Development planning, the housing will be located in the Lahainaluna Complex and contribute to equitable and sustainability community infrastructure. The capital plan will also allocate $225,000 to review environmental, Complete Streets, and multi-modal access to another redevelopment site in the county, among other efforts to marry equity, mobility, and sustainability.

CALIFORNIA—Plans Revised for Affordable Housing in Oceanside Transit Center Development
Phil Diehl, San Diego Union-Tribute, September 11, 2022
Preliminary plans to redevelop around a transit hub in Oceanside, California include significant provisions for affordable housing units that would expand affordable TOD in the San Diego area. The property is owned by the area’s chief transit service provider, the North County Transit District (NCTD), and, if leased for redevelopment, could become a mixed-use development with 550 new market-rate and 80 new affordable housing units. A NCTD official stated that they believe 99-year lease projects, such as this one, could help stabilize and diversify their revenue sources against fluctuating economic conditions.

VIRGINIA—Why Reston Station, Decades in the Making, Is a ‘Remarkable’ New Stage in CRE’s Evolution
John Krukowski, Bisnow (DC) with Studio B and Comstock Cos., September 15, 2022
Midway between Dulles International Airport and Tysons Corner, construction is moving forward on the long-planned development near Reston’s first Metro station. Anchored by two towers designed by the late award-winning architect Helmut Jahn, the 80-acre, mixed-use development is about 30 percent complete. When done, the project will comprise more than 6 million sq. ft. in five districts around the station and will feature office, retail, entertainment, and residential uses.

MASSACHUSETTS—Could it be the end of the line for transit-based development?
Cameron Sperance, Boston.com, September 14, 2022
Riders of Boston’s MBTA have faced a month-long subway shutdown and may soon have to endure other service interruptions to allow for much-needed repairs. While some wonder whether a pattern of unreliability supports a cautionary tale about investing near transit, others see the repair and maintenance as an investment in the future.

OREGON—Bike Advocates Want to Improve TriMet’s Hollywood Transit Center Redesign Plans
Taylor Grigges, BikePortland, September 14, 2022
TriMet and affordable housing developer Bridge Housing are advancing a project at the Hollywood Transit Center (HTC), east of downtown Portland. Plans call for a redesigned light rail and bus station, a 200-unit all-permanently affordable housing, and a new courtyard. The HTC is located adjacent to I-84 and a pedestrian bridge across the highway. Plans for the site include replacement of a ramp that fails to meet ADA requirements, but the preferred redesign—a condensed ramp/stair combo (“stramp”)—would require bicyclists to dismount and walk. Bicycle advocates are seeking improvements to the design.

TENNESSEE—Metro Wants to Attract More Affordable Developments by Getting Rid of Parking Requirements
Tosin Fakile, WSMV4, September 13, 2022
A proposed ordinance for an Urban Zoning Overlay in Nashville would eliminate parking minimums. Brett Withers, a councilmember supporting the measure, noted that requiring excess parking affects the availability of affordable housing and business space and developers could be afforded more flexibility in determining the parking for urban center sites. In Nashville the construction cost of a single parking spot is $30,000 or more, thus reducing the amount of underutilized parking is not just a planning concern but one of financial responsibility.

CANADA—A City in the City: TOD Bois-Franc
Arrondissements de Saint-Laurent et d’Ahuntsic-Cartierville (Ville de Montréal), September 14, 2022
The boroughs of Saint-Laurent and Ahuntsic-Cartierville in northwest Montreal and Provencher-Roy Architects have won the Grand Prix du Design, in the category of Urban Design Silver Certification, for the planning of the Bois-Franc TOD. The Bois-Franc Station will be the site of the new Réseau express métropolitain (REM) station, a bus terminal and the future extension of the orange metro line. To be built over the next 20 years, the “city within a city” could result in 7,700 new housing units, 39,600 m² of office space, 37,700 m² of commercial area, 23,300 m² of floor space dedicated to institutional functions, and 104,350 m² (or nearly 17 percent of the area) as parks, public squares and green spaces.

INDIA—GDA to Prepare Plans for TOD Zones Alongside MRTS and RRTS Corridors
Anushka Khare, Urban Transport News, September 7, 2022
The Ghaziabad Development Authority (GDA) will be developing plans for TOD zones in accordance with a TOD policy recently announced by the government of Uttar Pradesh, India’s most populated state. The Delhi–Meerut Regional Rapid Transit System (RRTS) is currently under construction and will run through Ghaziabad, a suburban community to the east of Delhi.  When complete, 22 of the 25 stations along the 82 km-long RRTS will be in Uttar Pradesh and managed by the Ghaziabad and Meerut districts. Land within a 1.5 km (0.93 miles) radius of stations and a 500 m (0.31 miles) radius of the mass transit line will be developed as TOD zones.