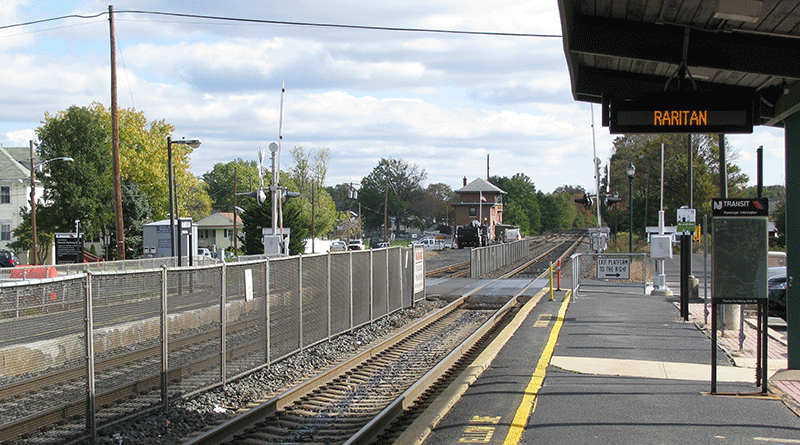 River Park at Raritan, a luxury rental unit property, recently opened on the site of the former Woolen Mills plant, a 16-acre site less than ½-mile from NJ TRANSIT’s Raritan train station, served by the Raritan Valley Line. Developed by Silbert Realty & Management Company of Millington and JMP Holdings of Clifton, the project is located between Elizabeth Street and Orlando Drive in Raritan, close to the borough’s downtown and offering views of the Raritan River. The property features a four-story, W-shaped building housing 224 one- and two-bedroom units, 12 of which are income restricted. On-site amenities include concierge service with continental breakfast weekdays for tenants and a full-service business center with conference facilities. There is underground parking on the site.

The project is the culmination of a seven-year effort involving clean up of the former Raritan Woolen Mills factory, later known as Somerset Manufacturing. The factory dated from the 1800s and produced uniforms for Civil War soldiers and blankets for the military in World Wars I and II. The site was the area’s largest employer in the 1930s and 1940s, drawing immigrant labor and gave rise to the Borough of Raritan, incorporated in 1948.

Though the site was believed to contain moderate levels of contamination, only minimal cleanup was ultimately required. The NJ Department of Environmental Protection approved most of the site for mixed-use residential development. The two-year remediation process, handled by the Whitman Companies, Inc. of East Brunswick, entailed the removal of a hot spot and some soil, as well as the use of an impervious cap topped with 18 inches of clean fill and 6 inches of top soil. No groundwater contamination was found on the site. Five-and-a-half acres of the site, located to the south of Orlando Drive and adjacent to the Raritan River, were approved for passive recreation and have been ceded to the Borough for a park. Redevelopment of the Woolen Mills property benefited from work done as part of a model pilot site selection process funded by NJTPA and US EPA and included conceptual transportation improvement plans and NJTPA Project Pipeline documentation.