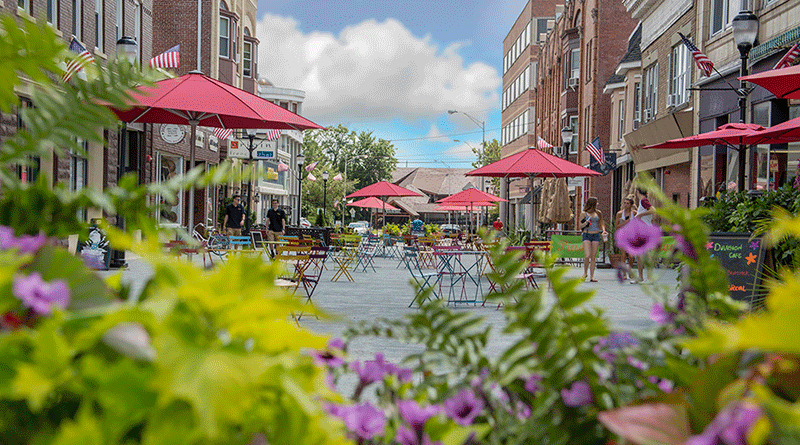 A wave of new multi-use developments near the Somerville Rail Station has attracted new and longtime residents of all ages. Recent redevelopment in the Borough complements its urban amenities—its walkable downtown, live music and art installations on Division Street, and events such as the Central Jersey Jazz Festival and “Tour of Somerville,” cited by USA Cycling as one of the nation’s oldest major bicycle races. About half of all units in Somerville are multifamily housing, which attracts a young population and supports the highest population density in the county.

Somerville is home to more than 12,400 residents, according to 2017 Census estimates, and occupies just 2.2 square miles. More than 700 commuters use the train daily. Those boarding at the station can reach New York Penn Station in under an hour via direct service on NJ TRANSIT’s Raritan Valley Line. Travelers can ride NJ TRANSIT bus routes 114 and 117 to Duke Farms, Bridgewater Commons Mall, and Somerset Medical Center. In addition to its active downtown and central business district, Somerville serves as an employment hub with a daytime population of more than 16,700 people and is the site of Somerset County’s office complex and the Ethicon corporation.

Somerville’s resurgence is the result of years of planning and community visioning. In 2005, the community began what became known as the Somerville Visioning Project. The project sought to achieve consensus on community needs, ensuring that new development would be compatible with downtown businesses, meet increasing demands of residents for evening and weekend activities, and support a circulation system that promotes safety and accessibility for pedestrians, cyclists, and transit users. One focus of this engagement effort was to establish plans for the area around the Somerville Station and for a large area adjacent to the station, formerly used as a landfill. The process also explored the costs and benefits of advancing different land uses, redevelopment options, and public amenity improvements. This visioning process led to the completion of the 2007 Station Area and Landfill Redevelopment Plan, which won a 2007 NJ Smart Growth Award. NJ TRANSIT, the NJ Office of Smart Growth, the NJ Department of Transportation, the Borough of Somerville, and Somerville County all contributed to the plan as partners.

An additional feature of Somerville’s continuing planning effort is its commitment to Complete Streets, which NJDOT defines as “a way to provide safe access for all users by designing and constructing a comprehensive, integrated, connected multi-modal network of transportation options.”

According to former Mayor Brian Gallagher, “[Complete Streets] is not just having safe sidewalks and roadways. It’s about having these greenway trails and connecting the community through a series of different links that encourage people to walk, run, hike and get out of their cars.”

The Somerville Station and landfill area represents the largest redevelopment areas in the community. The Somerville Station Area and Landfill Redevelopment Plan proposed efforts that would increase ridership at the train station and complement the existing businesses and character of downtown Somerville. The area, which was the subject of considerable attention during the early planning and community outreach work in 2005 and 2006, is now home to one of the community’s most notable attractions, the pedestrian-only Division Street.

Colin Driver, Somerville Director of Economic Development, describes the old Division Street as having two lanes of traffic and a narrow sidewalk that was difficult to use due to utility and light poles. The area was dark and uninviting at night, and commuters would not use it on their walk home from the station.  He noted that “vacancy rates for ground floor retail were at best 50 percent and upper floor residential vacancy exceeded 70 percent.”

Transformation of the street began in 2010. As a Transit Village, Somerville secured a grant of $100,000 to improve connections to the station by widening sidewalks and reducing vehicle travel lanes from two to one along Division Street. This process led to the idea of experimenting with a “shared street” that could be used by pedestrians, bicyclists, and drivers. To support this use and to optimize the space for events, the design called for raising the road surface to the sidewalk elevation. Construction occurred in 2012 and entailed pouring of an all-concrete surface, at which time the street was closed to vehicles to allow the concrete to cure. Residents and businesses grew accustomed to the pedestrian-only space, and based on community support expressed in a 2013 survey, the Borough made the change permanent.

The street’s transformation brought about major changes. In less than 18 months, retail use along the corridor increased from 50 percent to full occupancy. Now Division Street is home to 30 retailers and serves as the heart of downtown. The Somerville Downtown Alliance keeps the corridor lively with events and other amenities with support from Main Street New Jersey, a state-supported program.

To the south of Division Street and the rail station lies the former Somerville landfill, a 110-acre site closed in 1982 that has since been underutilized. In 2009, the area was designated a brownfield development area. The $17.4 million cleanup project, which began in 2016, is one of the largest rehabilitation projects in Central Jersey. Somerville will pay for the project with a $3.9 million low-interest loan from the state, with the remaining cost funded through state grants. The Borough hopes to complete the cleanup by the end of August 2018.

Located in the center of the Landfill Redevelopment Area is the Green Seam Park Project, which former Mayor Brian Gallagher predicts could be a “scaled down version of New York City’s Central Park” within a few years. The project will complement new development, facilitate detention and on-site filtration of stormwater, and cost $16 million, $12.2 million of which is supported by NJ Department of Environmental Protection grants. The goal is to turn the park into a regional recreational destination complete with jogging paths, bikeways, and other outdoor amenities, such as basketball or tennis courts, to promote active recreation. The park will connect with two landfill planning areas dubbed “The Hub” and “The Heights.” The former refers to the rail station area, which comprises higher-density housing in a downtown mixed-use environment, while the latter refers to the landfill area south of the rail station, comprising moderate-density housing and considerable Green Seam frontage. The Borough’s long term redevelopment planning envisions a third landfill planning area, “the Gateway,” with office space development accessible to Route 206. Dubbed “The Gateway” as it projects Somerville’s connection to the region’s economy, the area leads to the Wetlands Parkway, which provides visual and physical access to Downtown Somerville.

The Borough recently approved the largest multi-use redevelopment project in its history for a 31-acre tract in the Hub, bound by the rail right-of-way, South Bridge Street, and Route 206. The NJ TRANSIT-owned property is competitively offered for redevelopment in keeping with the Borough’s adopted plan. Somerset Development, a Monmouth County developer is under contract to purchase the property. Their preliminary plans for Somerset Station, as it is known, include fourteen buildings, each four- to six-stories tall. When complete, Somerset Station will offer a total of between 650 and 700 residential units, with at least 156 townhouses. Somerset Development worked from the project’s inception with the Borough’s redevelopment committee, which shared insights on community needs gained through ongoing public engagement and multiple public hearings specific to the project. Community members expressed support for having high-end units near the rail station and the availability of for-sale townhomes. Somerset Development plans to begin construction in 2019 and plans to complete the project within five to seven years.

Located a block to the northwest of the rail station, the West Main Street redevelopment area includes West Main Street and the former Downtown Somerville Landmark Shopping Center, a 1970s strip mall. According to the West Main Street Area Redevelopment Plan, a growing consensus emerged among Somerville stakeholders in the early 1990s that the site was underutilized. Somerville leaders identified the site as a potential activity anchor for mixed-use developments in the 1991 “Downtown Vision Plan” and incorporated this objective into the Borough’s Master Plan. However, redevelopment would take another 19 years to complete. The Borough designated JSM as a redeveloper in 2005, but construction was delayed due to litigation related to removal of tenants, followed by the subsequent change in market conditions. After the Borough and JSM executed an amended redevelopment agreement in 2010, JSM finally started construction. The area now features a large mixed-use complex called The Edge, the site of a Shoprite supermarket, nationally recognized retailers, the only Wolfgang’s Steakhouse located outside a major world city, and 108 apartments. A planned third building will provide a food court, fitness center, and a rooftop pool. The Borough estimates this redevelopment has resulted in 230 new jobs and $50 million in new customer spending.

Several new redevelopment projects, including the reuse of older industrial, residential, and business sites, are proximate to the rail station in the East Central Business District. The redevelopment plan designates the area along South Bridge Street and Franklin Street for adaptive reuse for professional offices. About a block from the station, at the former site of Somerville Aluminum, is Somerville Commons, a new four-story mixed-use commercial building with ground floor retail, two restaurants, office space, and fourteen apartments on the upper floors. The Cobalt, a new four-story building with 117 units, is located a block from the station at 66 Veterans Memorial Drive. The project occupies a former junkyard left vacant for twenty years. Somerset County conferred a planning award for the project’s transformation of vacant and contaminated property into productive use. The project’s developer, Weiss Properties, is continuing work on its next project.

Another project, the Davenport, is located at 21 Davenport Street, just north of West Main Street. The five-story building will offer sixty units and is set to open in 2018. Weiss Properties has entered into a PILOT agreement with Somerville, which incentivizes the redevelopment of blighted properties.

In just over a decade, Somerville’s redevelopment efforts have led to a vibrant downtown, and more walkable, transit-friendly neighborhoods. Mr. Driver attributes Somerville’s uniqueness to “a combination of aggressive redevelopment in and around the Main Street core, as well as having a highly visible redevelopment program.” He notes that the Special Improvement District, the Somerville Downtown Alliance (SDA), works very hard to promote the Borough’s attributes including Main Street.

SDA Executive Director, Beth MacDonald, says “converting Division Street from a mediocre cut-through street to a full-time public plaza represented a significant turning point in the history of downtown Somerville” and allowed Somerville to distinguish itself from other New Jersey downtowns. She looks forward to seeing several projects get underway, in particular Village Brew, Somerset County’s first brew pub, which will feature event space for larger gatherings. “I’m also looking forward to seeing a diversification of housing options as we consider the changing needs of our demographics.”

July 19, 2021 Noah Harper Comments Off on Morristown Connects Transportation and Land Use Planning to Promote TOD