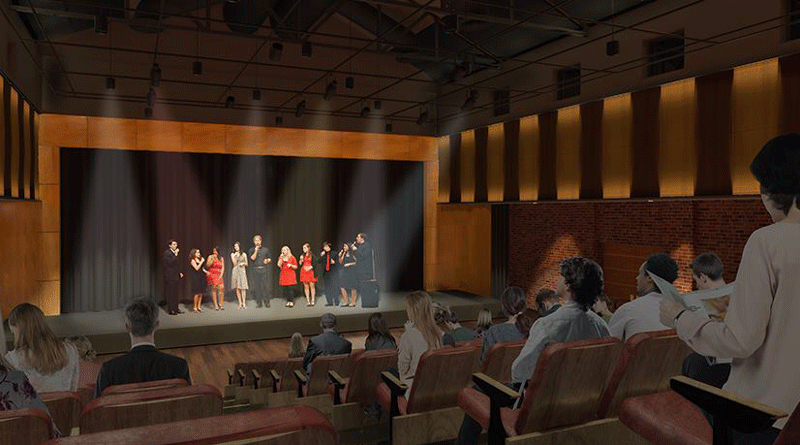 Rendering of the theater at Avenel Performing Arts Center, courtesy of the center’s official Facebook page

Raritan Preparing to Use Grant Money to Make Borough More Pedestrian, Cyclist Friendly
Linda Schulte, TapInto Bridgewater/Raritan, February 5, 2019
Raritan Borough hosted a workshop on February 2 to discuss improvements around the train station to be conducted with a $1 million construction grant the borough received from NJTPA, as well as a $200K design grant. Many major streets will be included in the improvement plan, which will focus on increasing mobility safety in public space for pedestrians and cyclists. The workshop is the first step in the planning board’s update of the Circulation Plan Element of the Borough’s Master Plan.

Newark Redevelopment Plan Backed by Queen Latifah Slated for Summer Groundbreaking
Joshua Burd, Real Estate NJ, February 7, 2019
The Rita Gardens project in Newark’s West and South Wards is scheduled to break ground this summer. It will provide market rate townhomes as well as apartment homes affordable for low-income residents, within walking distance of bus lines that connect to Newark Penn Station, as well as Newark’s restaurant and downtown offerings. The project is the work of Queen Latifah through her co-presidency of Blue Sugar Corporation, which is partnering with GonSosa Development on the work.

Developers Unveil 236-unit Rental Complex in Weehawken’s Lincoln Harbor
Joshua Burd, Real Estate NJ, February 7, 2019
The Harbor 1500 luxury apartment complex has opened for leasing in Weehawken’s Lincoln Harbor neighborhood. The 236-unit building is easily accessible via ferry, the Hudson-Bergen Light Rail, and buses. Hartz Mountain Industries, one member of the project’s joint venture that also includes the Maxal Group, has plans to continue development in the Lincoln Harbor neighborhood, including establishing a Whole Foods store that will open across the street from Harbor 1500.

Fullerton Opens First Affordable Transit-Oriented Community at Former Hawaiian Punch Bottling Site
Ron Demeler, Fullerton Observer, February 5, 2019
The Citrea apartments in Fullerton, CA have opened, providing 54 affordable units within walking distance of the Fullerton train station in the city’s downtown. The project is the first affordable community to be built under the Fullerton Transportation Specific Plan. Residents of the complex will have access to social services for low-income families, such as adult educational courses.

$15M Equitable Transit-Oriented Development Launched
Moira Carlstedt & Owen Washburn, Building Indiana, February 5, 2019
The City of Indianapolis, the Indianapolis Neighborhood Housing Partnership, Cinnaire, and JP Morgan Chase are partnering to establish a $15 million equitable TOD fund. The fund will help preserve or create 1,000 mixed-income housing units within a half-mile of the city’s transit stops. The first focus areas for the partnership are seven neighborhoods along the Red Line, a bus rapid transit line scheduled to begin service this year.  Rent premiums and soon-to-expire rent subsidies in these neighborhoods are preventing lower-income families from living in areas served by rapid transit.

Chicago’s South and West Sides Have Most to Gain from Bus-Focused Development Push
Kendra Freeman, The Chicago Reporter, February 6, 2019
In January, Chicago’s city council passed an amendment to its TOD policy to expand development incentives to high-ridership bus lines. Additionally, the amendment requires the city to examine past TOD to determine if it has been equitable, and make changes to ensure low-income and other disadvantaged communities benefit from TOD efforts. The change comes after a study from the Metropolitan Planning Council indicated that most TOD has been concentrated in the wealthier North and Near West sides of Chicago.

The Green New Deal’s Huge Flaw
Alex Baca, Slate, February 7, 2019
The Green New Deal was proposed on Thursday, January 31st by Representative Ocasio-Cortez and Senator Markey to create jobs by pushing the US economy to focus on sustainability, resilience, and carbon emissions reduction. This critique of the proposal observes that the Green New Deal does not address the issue of housing sprawl, which is the cause of many vehicles-miles-traveled and the resulting carbon emissions as Americans commute to work. Rather than focusing on electrifying vehicles to reduce carbon emissions, the focus should be shifted towards creating more housing near job centers and maximizing land use to create density in the suburbs.

As Transit Expands, Metro Vancouver Struggles to Keep Homes Affordable
Maryse Zeidler, CBC News, February 4, 2019
Metro Vancouver is beginning the second phase of its “Transit-Oriented Affordable Housing Study” to incentivize developers to create affordable housing units in their projects. The kickoff follows an endorsement by the city council to extend the Broadway SkyTrain project to the University of British Columbia. Land owners have already begun advertising their properties’ proximity to future transit, and many renters are concerned the new transit options will only increase the cost issues they currently face.

Exeter’s Huge New Vision Will Need People to ‘Give Up the Car’
Hannah Finch, DevonLive, February 7, 2019
Exeter City Council has published its housing plan for the 2020-2040 time frame, called Liveable Exeter. The plan envisions 12,000 new homes created in this time period in eight distinct mixed-use neighborhoods within the city, some of which are close to rail transit. Council officials indicate that, in order for the plan to succeed, Exeter residents will have to help eliminate parking space needs by reducing their car usage, which will create the space and opportunity for new development.