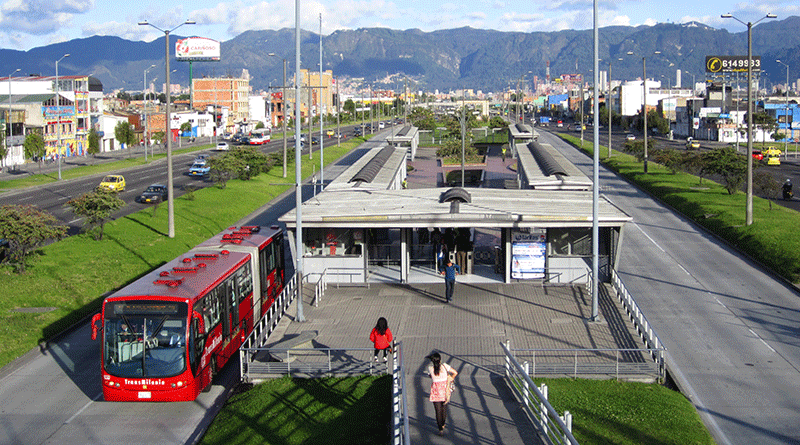 With environmental and energy conservation concerns mounting, so has the demand for high quality public transit as an essential part of a sustainable urban future. Bus Rapid Transit (BRT), with the strong support of the Federal Transit Administration, has emerged as an efficient and affordable investment concept for converting existing, traffic-clogged urban bus routes into a modern, fast, reliable service. New Jersey’s large bus network, serving areas with high and medium density, is fertile ground for an evolution of Bus Rapid Transit.

Urban planners are asking whether BRT can attract economic development comparable to light rail projects, such as the Hudson-Bergen line. The evidence is just beginning to emerge that the more extensive BRT investments can serve as anchors for transit-oriented development. According to TCRP Report 102 (2004) by Cervero et al, only eight percent of TODs throughout the nation are served by bus.

Two hurdles are usually cited. One is the issue of impermanence: because bus lines can be changed or abandoned relatively easily, they are less attractive to investors. A second issue is that because BRT projects are often implemented incrementally, the absence of dramatic change in service quality may not attract investor attention. The more striking the changes associated with BRT—upgraded stations, bus shelters and dedicated lanes—the greater the sense of permanence that can often attract economic activity.

BRT can incorporate many of the most desirable features of rail transit, but each application differs. Some of the more ambitious BRT projects use buses or specialized vehicles on roadways or dedicated lanes to move passengers quickly and efficiently from one destination to another. More advanced BRT vehicles also use optical or magnetic guidance, which allow vehicles to leave stations and travel more quickly and to be spaced closer to one another.

When used in conjunction with smart growth land use policies, the selective application of these techniques can support transit-oriented development.

Another advantage of BRT over rail or light rail can be lower cost. However, BRT can take many forms and encompass many different kinds of improvements, making it difficult to compare costs directly. That being said, the most extensive BRT systems cite lower per mile costs than most light rail systems and all commuter rail systems. Many transit agencies do not have the resources to build rail, but may have funding to implement BRT. Additionally, since BRT encompasses a range of improvements, agencies may be able to implement improvements incrementally as funding allows.

One of the difficulties in gaining acceptance for BRT as an economic development tool among urban planners and the investment community is its relative scarcity, although the number of BRT systems is increasing both in the United States and abroad. Pittsburgh, which operates three busways (South, Martin Luther King, Jr. East and West) as well as a light rail route and commuter rail service, is perhaps the most notable example of U.S. cities that have successfully used BRT to provide transit service to its residents. The Martin Luther King, Jr. East Busway, opened in 1983 and extended in 2003, connects the downtown to the eastern suburbs of Allegheny County. Pittsburgh’s transit agency, the Port Authority of Allegheny County, reports more than $300 million in office, retail and residential development has occurred near its Martin Luther King, Jr. East Busway stations.

Other BRT systems are also showing promise, both as efficient ways for people to travel and for spurring local development. Boston, Los Angeles and Cleveland have recently embraced BRT by establishing new urban routes. (See below for a brief discussion of proposed development at Los Angeles County’s El Monte Transit Hub, as well as Boston’s Silver Line. Also, see our article about Cleveland’s Euclid Avenue corridor, “Cleveland Moves Forward with Bus-Supported TOD”, in the national news section.) Abroad, Bogotá, Columbia is notable as a city that has built a successful BRT system that has contributed to increased land values.

In 2000, Bogotá opened its BRT system, known as the TransMilenio, to improve its residents’ quality of life and increase productivity in the city. TransMilenio officials have reported that their fast and reliable BRT system, which operates on a dedicated lane located in the middle of major roads and highways, has reduced travel time by 32 percent, gas emissions in the city by 40 percent, and accidents in the corridors where the system operates by 90 percent. TransMilenio has proven enormously popular; by the end of March 2002, ridership had increased to nearly 645,000 passengers per day.

Today, the system has 14 express routes and operates 18 hours a day, operating double-long red buses along most of the system. TransMilenio also runs smaller, “feeder” buses, which pick up passengers from local neighborhoods and deliver them to major stations and terminals. These feeder buses are free to TransMilenio riders.

In one of a small number of studies done examining the relationship between BRT and land values, Rodríguez and Targa found in 2004 that residents of Bogotá were willing to pay as much as 9.3 percent more for their homes in order to reduce their walking time to a BRT station by five minutes.

In eastern Los Angeles County, the City of El Monte is placing its faith in bus travel as it moves forward with the Titan Group’s $1.2 billion El Monte Transit Village development. The El Monte Bus Hub is just 14 miles east of downtown Los Angeles and among the busiest transit centers in Southern California. It serves many routes, including MTA’s Metro Express and Foothill Transit’s Silver Streak bus rapid transit line, both of which use the El Monte Busway, a high occupancy vehicle lane stretching to Los Angeles on Interstate 10.

In September 2007, the El Monte city council approved Titan’s plan and environmental impact report which includes 500,000 square feet of office space, 1,850 residential units (much of it affordable), and 560,000 square feet of commercial space, as well as a 200-room hotel and 11 acres of public parks. The Titan Group expects to break ground on what is believed to be the largest TOD in California. The developer estimates that the project will bring the city of El Monte an additional $3.5 million in annual revenues.

In Boston, the Massachusetts Bay Transportation Authority (MBTA) has completed two of three sections of the Silver Line, a BRT system which features both electric and diesel vehicles. The system makes fewer stops than typical bus lines and has upgraded stations. Several infrastructure improvements, including roadway resurfacing, the widening of the brick sidewalks, and the addition of historic lighting fixtures, have also been made along the Silver Line route. The MBTA has reported that ridership on the Silver Line is 96 percent higher than it was on the previous local bus service. In addition, the authority has said that evening peak travel times have been reduced by 25 percent.

The first section of the Silver Line was opened in 2002, connecting Dudley Square with downtown Boston along Washington Street. Silver Line Phase I was designed to replace local bus service which, in turn, had replaced the elevated Orange Line, which was demolished 20 years ago. Buses travel on the street in a combined bus and right-turn only lane for the majority of the route, though they also travel in mixed traffic (general street traffic) and for a short segment, along an exclusive contraflow lane. The second phase of the Silver Line opened in 2005, connecting South Station to the South Boston Waterfront area, with three routes emanating from a main (trunk) route serving Logan International Airport, Boston Marine Industrial Park and City Point. The trunk line of Silver Line operates in an exclusive right-of-way tunnel for the mile between South Station and Boston’s World Trade Center, and in a surface right-of-way for an additional half mile to Silver Line Way.

A 2005 report by the Federal Transit Administration (FTA) found that more than $1.2 billion in new construction had occurred near the Phase I stations since planning began in 1997. New development and redevelopment has taken place all along the route, most heavily in Downtown/Chinatown and the South End. During this period, the Downtown/Chinatown neighborhood saw the opening of Millennium Place, a high-rise mixed use building featuring luxury rentals and extended stay apartments and Archstone Boston Common (formerly Park Essex), a building with 440 rental units over ground floor retail. The South End, where there were many vacant blocks and abandoned buildings along the Washington Street corridor, gained more than 1,700 new or renovated housing units, of which 900 are designated as affordable. The neighborhood has also gained about 128,000 square feet of retail space.

A 2007 FTA evaluation of Phase II Silver Line found significant new development in the South Boston Waterfront, a former industrial area. From 1998, when the project was announced, to mid-2007 when the evaluation took place, office and retail construction had produced about 2 million square feet of development. The area has also gained more than 1,200 apartments and 800 hotel rooms. More recently (January 2008), the Marriott Renaissance Boston Waterfront Front Hotel has opened, one of 13 major projects that will add nearly nine million square feet of new development in the area.

The MBTA is currently working on plans to build a third and final phase of the system which will connect the two sections that have already been built. The Silver Line Phase III will operate in a one-mile tunnel, beginning at South Station and heading northwest beneath Essex Street. New Silver Line stations will connect with the existing Chinatown Station on the Orange Line and the Boylston Station on the Green Line.

When discussing development opportunities associated with improved bus transit systems, planners and transit officials in New Jersey and elsewhere are increasingly considering BRT as an economically prudent alternative to rail and a far superior option to traditional bus service.

Although there are currently no BRT lines in New Jersey, Newark, which is served by nearly four dozen bus routes that carry about 250,000 passengers daily, is slated to receive a partial application on Springfield Avenue in the spring of 2008. Officials are also considering other BRT routes in Newark, including connecting Bloomfield Avenue via Broad Street to the Airport/Port area. Funding for this project is being sought from the Liberty Corridor program.

Two other BRT systems are under consideration. The Central New Jersey Route 1 BRT would operate along the Route 1 corridor between South Brunswick and Trenton. This transit enhancement has been proposed to help alleviate congestion along this busy corridor and to enhance existing transit, primarily the north-south Northeast Corridor rail route and the short spur track that connects the Princeton Junction and Princeton stations (or the Princeton “Dinky”). An alternatives analysis study completed in 2006 proposed a long-term system plan to be implemented in phases. The proposed BRT routes would connect key points along the Route 1 corridor and in outlying areas in New Jersey and Pennsylvania, with major ridership generators in the corridor. These include several large office parks, shopping malls, Princeton Borough and Princeton University.

The plan recommends exclusive BRT guideways, BRT priority improvements, development of BRT stations and park-and-ride lots outside of the Route 1 corridor. It is estimated that the BRT system would serve over 15,000 riders daily, more than doubling the number of work trips using transit. Many of these work trips would be a result of increased employment along the core of the BRT, predicted to rise by 40 percent to about 100,000 jobs by 2025. NJ TRANSIT is currently working to define the initial phase of the system.

The Greater New Brunswick BRT project is in the initial planning stages, with officials studying the potential for improved service along key corridors that include municipalities proximate to the New Brunswick rail station—Edison, Highland Park, Franklin (Somerset), North Brunswick, Piscataway and East Brunswick. Officials predict that a BRT system would increase the potential for New Brunswick by providing additional transit options for those working or living in the city.