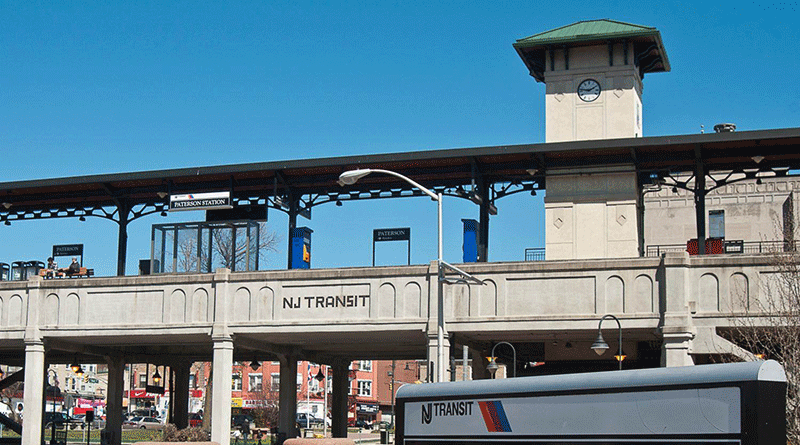 America’s first industrial city has recently rediscovered its train station. New Jersey’s third most populous city with nearly 150,000 residents, Paterson is also among its most dense, with nearly 28 people and 9 housing units per acre. Since the opening of the Secaucus Junction rail station in late 2003, service frequency on the Main Line has been increased. Paterson train riders can now reach midtown Manhattan, the region’s major destination for jobs, culture and shopping, in about 48 minutes, which includes a transfer at Secaucus Junction. The Main Line trains that stop at Paterson terminate at Hoboken station where riders can transfer either to the Hudson-Bergen Light Rail line to access destinations along the Hudson River waterfront, or to PATH or ferries for travel to lower Manhattan. Average weekday passenger boardings at the Paterson station have more than doubled since the Secaucus Junction station opened, rising from 270 in FY03 to 571 in FY07.

The city is beginning to see its station as a hidden opportunity—one that had not previously received a great deal of attention. One project that intends to capitalize on this asset is the Center City project, an effort to redevelop an area located just one block west of the station. The Center City project, encompassing an entire city block, is intended to anchor commercial and other redevelopment throughout the downtown, as well as serve as the first step in developing the station area into a mixed-use, around-the-clock community. Planning began in 2006 when Nick Tsapatsaris & Associates (NTA) was designated to redevelop a city block occupied by two large, city-owned surface parking lots. When completed in fall 2009, this project will serve as a commercial retail center featuring 320,000 square feet of national and regional retail and entertainment uses. NTA is finishing work on the first phase of construction, completing an underground parking garage that will provide 650 spaces. It will alleviate demand at a nearby city-owned garage where valet service is being used so that it can be operated over capacity. When done, the new underground garage will be accessible while work continues on the building above.

Looking beyond the Center City project, NTA intends to build on two additional parcels north of the Center City project. On the corner of Smith Street and Veterans Place (less than a quarter-mile from the station), the firm plans to build a 160-unit residential building on a surface parking lot owned by the Paterson Parking Authority. On another surface lot at the corner of Hamilton and Smith streets (slightly more than a quarter-mile from the station), the developer plans to build a five-story office building. Parking lost to these projects will be replaced and supplemented with a new garage the city’s parking authority plans to build on a site located between the new NTA buildings.

In another redevelopment effort, the parking authority in January opened a mixed-use parking structure at Broadway and Memorial Drive, located across from Passaic County Community College and about a ¼-mile northwest of the station. This structure includes 24,000 square feet of new commercial space and additional parking for the college. A state Motor Vehicle Commission office opened in March, marking the agency’s return to Paterson after its previous office closed in 1995. The college also anticipates moving its bookstore into the building to make way for new classroom space.

Two other projects are in the works for the Paterson station area. One block north of the Center City project, the old Alexander Hamilton Hotel (55 Church Street) is being renovated to provide senior housing. The old Fabian Theatre cinema, located less than a ¼-mile from the station at the corner of Church and Ellison streets, is slated for rehabilitation into a flexible performance space, known as a “black box” theater. The building dates from 1925 and was designed by Paterson architect, Frederick W. Wentworth. The historically recognized structure has been empty since 1993.