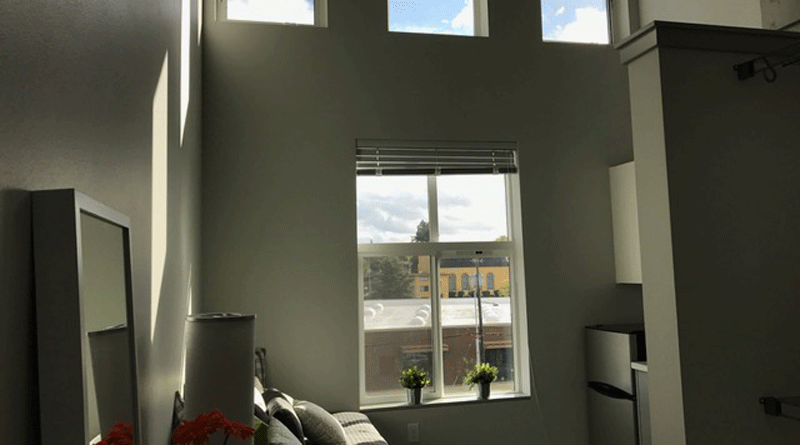 A trend toward smaller housing units is an important movement that can have a big impact on transit-oriented development.  As transit ridership grows and the desire to reside in transit-accessible and walkable areas increases, diversifying housing options has become one means to address growing demand.  Two distinct types of smaller units can help increase the amount of housing in TOD areas: microunits and accessory dwelling units.

Microunits are establishing a presence in metropolitan areas across the country.  These small studio-sized housing units, typically smaller than 500 square feet in size, are viewed by some local governments, developers, and housing advocates as a way to provide affordable housing.  Microunits can be introduced into the marketplace at a comparatively reasonable price, even as the prices of larger units increase.  Suitable for one or perhaps two occupants, microunits are an option for young professionals and retirees alike – affording residential opportunities in walkable, transit-accessible neighborhoods where other real estate is often at a premium. More importantly, microunits allow renters to live in communities where they may not otherwise be able to due to financial constraints. These individuals, and the developers who create these units, have discovered that the amenities found beyond their apartment walls are what is desirable. Renters in several metropolitan areas are increasingly looking for smaller apartments in vibrant neighborhoods with good transit access.

These units are also a good fit for communities trying to accommodate single person households. Many locations have a dearth of housing suitable for this growing demographic – people living alone accounted for 17 percent of households in 1970, rising to more than 27 percent by 2012. This trend is particularly prevalent in urban centers – single person households make up nearly a third of all households in New York City, more than 40 percent of those in Seattle and Denver, and more than 45 percent of those in Washington, DC. A recent report of NYU’s Furman Center highlights this growing demographic as well as the lack of viable housing options and states that:

The existing stock of rental housing falls significantly short of the need in many areas of the country, along at least two dimensions. The shortage of units that are affordable given the incomes of the population is one well-known problem. In addition, the sizes and configurations of available housing frequently do not match the specific needs of prospective tenants.

To support the development of microunits to accommodate this population, cities throughout the US have amended their development regulations to permit the construction of smaller units. For example, Boston has lowered its minimum apartment size from 450 to 375 square feet and San Francisco from 290 to 220. Austin, Texas has taken the approach a step further by encouraging the construction of microunits specifically in transit-oriented developments (TODs). To support this effort, in March 2014 the Austin City Council passed a resolution that directs the city manager to explore the reduction or elimination of required parking for 500 square foot or smaller dwellings located within core transit corridors or TOD districts.  Such changes can allow developers to increase the number of units that can be delivered to market in their projects and eliminate the cost of parking facilities, which can be quite high, particularly for structure parking.

With development regulations permitting the creation of microunit buildings, some of these areas are beginning to see the development community respond.  In Portland, Oregon, Footprint Investments is undertaking two separate 56-microunit apartment buildings known as the Thurman and the Hollywood.  Each building is located a few blocks from a light rail/streetcar station and will be constructed on a former single-family home lot, thus replacing two housing units with 112.  These buildings have very small units, even by microunit standards, at less than 200 square feet.  However, shared elements, such as a common kitchen, free up space within the unit.  Because of this design, the Footprint projects are not required to include on-site parking and instead promote biking, walking, and car-share service as means of transportation.  The projects are located in highly walkable neighborhoods allowing residents to accomplish most errands on foot – as is confirmed by high Walk Score ratings. Walk Score, an online resource that measures pedestrian accessibility, rates Hollywood a 89 and Thurmont a 91 on a 100-point scale. In addition, each building is located near car-sharing stations to provide residents with an automobile when needed.

While microunits are flourishing in many redeveloping urban areas, residents elsewhere may benefit from another type of housing unit, the accessory dwelling unit (ADU), sometimes known as “granny flats” or “mother-daughter units”.  These, often small, ADUs are self-contained dwelling units that can be either freestanding structures or attached to an existing building.  As such, these units have their own bathroom, kitchen, and sleeping areas separate from the main dwelling unit on the property.  ADUs support a variety of living situations – an elderly parent or adult child or an unrelated tenant with a contract lease.  ADUs provide an affordable housing option, an economic resource to property owners, and increased density without markedly changing development patterns of an already established neighborhood.

An early proponent of ADUs, Portland, Oregon, has sought ways to encourage this form of housing and significantly reduced the cost of building permits for these units in 2010. As a result, applications for ADU building permits rose from about 30 per year to 200 per year in 2013. Seeking to measure the impacts of ADUs on the community, the State of Oregon Department of Environmental Quality examined the implementation of Portland’s ADU effort and its effects on the neighborhoods in which they are located. Researchers surveyed owners of permitted ADUs on a variety of topics. They found that ADUs were serving as a housing resource for young residents; with more than 40 percent of ADU occupants aged 25-34.  Owners of ADUs were predominantly older, with nearly 64 percent owned by individuals aged 55 and over.  Adding an ADU to a property enhanced the affordability of the property for the owner, while creating an affordable option for the renter of the ADU. In addition, researchers found that ADUs had minimal impact on parking; parking is not required for ADUs and 20 percent of all ADUs do not have parking.  Portland ADUs generate 0.93 cars per dwelling, significantly lower than 1.31 cars per dwelling among all new rentals in the city.

Santa Cruz, California is also working to promote the ADU development.  The city recently published its Accessory Dwelling Unit Manual to assist residents in the development of these units on their properties.  Topics discussed include local development regulations as well as sample plans.  In Santa Cruz, a property must be at least 5,000 square feet in size to accommodate an ADU.  The manual also describes how ADUs can fit into different neighborhoods so as to maintain character and context.  For example, in traditional neighborhoods with alleys, ADUs should be located at the rear of the property with frontage on the alley or rear property line, thus maintaining the traditional setback of older, established neighborhoods. Alternatively, in suburban neighborhoods, ADUs should be incorporated into the property through garage conversions or placement of the unit at the rear of the property with access from the street front.

In New Jersey, Delaware Township has adopted a similar approach to promote ADU development. In 2009, the township adopted an ordinance that permitted the creation of accessory apartments as part of the overall Delaware Township Affordable Housing Program and published its Accessory Apartment Program Handbook in 2012. The handbook provides detail on financial assistance, standards and income regulations to develop affordable accessory apartments.  As a component of the Township’s overall affordable housing strategy, ADUs are promoted as a means to increase both the number and variety of housing opportunities.  Other communities in New Jersey, especially those with transit, may benefit from a similar approach to increasing housing options for their residents.

These small-scale housing options – both microunits and accessory dwelling units – have the potential to increase housing availability in places where it is needed most – transit-friendly communities.  As the desire to live in walkable, bike-able, and transit-rich neighborhoods grows, increasing the stock of affordable units that cater to new residents young and old can provide new opportunities.